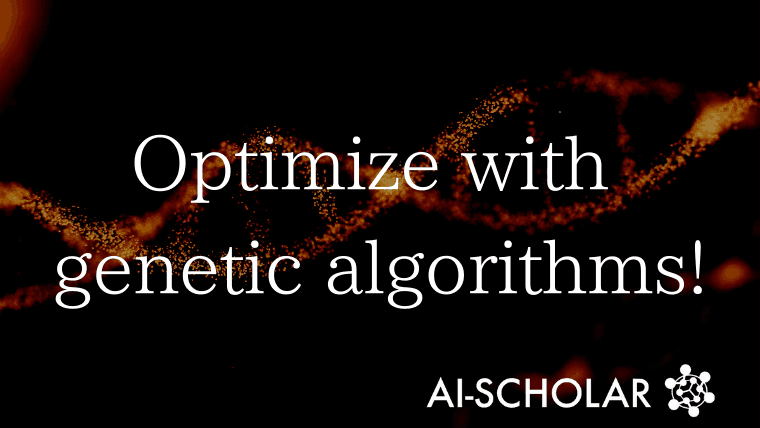 3 main points
✔️ Develop a computationally efficient GA to evolve CNN
✔️ Validated on FashionMNIST and MNIST, outperforming the accuracy of 12 out of 16 competing methods
✔️ Successfully compressed optimization that used to take more than a few days into less than a day

The CNN architecture has been improved remarkably in recent years, and the classification accuracy has increased along with it! However, while the architecture of CNNs is becoming more complex, the optimization of the architecture is increasingly dependent on "human power".

So, I'm going to introduce a paper that proposes "gaCNN" as a method to optimize CNN architecture with GA (Genetic Algorithm)!

The main elements described in the proposed methodology are

To evolve a CNN using GAs, we need to get the genetic math right!

Each part of the gene represents a layer, with random parameter values depending on the type of layer (A).

Using the two-parent solutions selected in the Slack Binary Tournament, swap layers of the same type (weights and bias initialization strategies can also be changed) The

The proposed evolutionary algorithm is an extension of EvoCNN [ 25

Contribution to this paper

We add different Mutation approaches to explore the search space by modifying the network architecture using the above elements The following is an example.

This section is organized as follows.

The gene proposed in this paper consists of two parts: Layers and activations.

These encoding strategies allow operations to be applied separately and provide a high degree of flexibility to add new layer types, new activation functions, and shortcut connections. Specific expressions are as follows The

Layers are represented as follows

Activations are represented as

GA using the Encoding Strategy in the previous section.

Population size parameter: defines the number of candidate architectures in each generation The

Figure 4. example of CNN with the proposed gene encoding

20% of the population from within the pool by mutation using the best 40% of the previous generation and 40% of the children generated.

It is done until the maximum number of generations is reached, the optimal solution is selected, and full learning is done with at least 150 epochs (ne), a small batch size (bs), and a learning rate (lr) of 0.01 to 0.001. These flows are as in Algorithm 1

The details of the initialization algorithm are as follows. The number of layers is taken randomly as minLayers, maxLayers, where the minimum and maximum of layers are defined.

The crossover proposed in this paper is as follows.

Apply tournament selections to parent individuals. The following is a list of the most common problems that can occur.

... and randomly select two pairs from the 40% best architecture candidates of the previous generation.

If the parent layers don't match, no change (activity stays the same) The

Figure 6. child is generated using the example in Figure 5.

The following four types of mutations are defined

The architecture to be mutated is randomly selected from the 40% best architecture and the 40% descendants, for a total mutation rate of 20%, generating the next generation

The Fitness function is computationally expensive because it requires the CNN to be trained The following example shows how to use the Therefore, only one epoch is used to compute fitness (so that GA can evaluate these networks within a day). When an optimal architecture is found at the end of the GA, it is fully trained to find the final Fitness of the optimized architecture The

To evaluate the proposed algorithm, we compare it with other approaches.

Fitness functions are as follows The

The parameter settings are shown in the table below The following is a list of the available options.

The computational cost of the proposed method

The value of the Fitness function is increasing with each generation. Reason. This is because the genetic operators used are well balanced between the search and use of the population in the pool of GAs The

What can be considered from Figure 7

Reason) Because the properties of Crossover and Mutation can be exploited to increase the diversity of the initial architecture and to better explore the search space.

Figure 8. What can be considered from

The results of Fully Trained on the Best 30 architectures found in the experiment are shown in Figure 8. The

Comparison with other methods

The gaCNN runtime is about 18 hours (within a day ) using a GPU.

It is also useful in terms of time, considering that other architecture optimization methods take days or thousands of hours.

Table III. the proposed algorithm performs better than most competitors on the test set

From the results of Fashion MNIST, we can say that gaCNN can produce stable results without outliers So, we run gaCNN only once to verify its accuracy.

Fig. 9. Results for the optimal network architecture after sufficient training

the class system, but without significant bias.

Table V: Comparison with other methods

The accuracy of gaCNN outperforms 12 out of 16 methods The

However, more runs are needed to provide confidence intervals for the proposed algorithm for this dataset.

TABLE V gaCNN performs better on the MNIST Handwritten dataset, outperforming 12 out of 16 competing methods in a single run (higher classification accuracy of the proposed method is denoted as (+), lower accuracy as (-))

We proposed a hybrid classification architecture consisting of CNNs optimized using GA. It utilizes a novel mutation operation and a network-wide heterogeneous activation function The

Algorithm: We were able to identify a competitive architecture using a less complex paradigm of connection and layer types. The number of days it took to identify the optimal NN was Only 1 day The