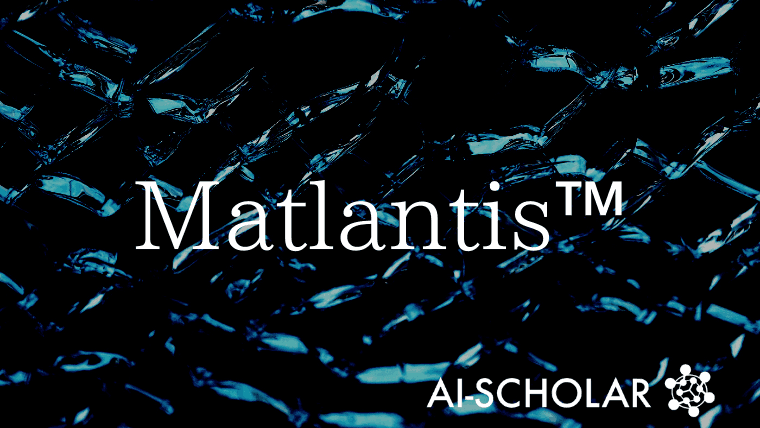 Matlantis™" was born by the joint development of Preferred Networks and ENEOS. Matlantis™.

This service can be used to predict the performance of materials, simulate and explore materials using machine learning. This service is attracting a lot of attention in the field of materials informatics because of its high versatility.

This time I would like to introduce "PFP" which is used in "Matlantis™". This paper is contributed by Preferred Networks and ENEOS.

There are a variety of elements in this world, and the number of substances consisting of their combinations is astronomical. Computer simulations based on quantum chemical theory, such as DFT calculations, are effective for handling these substances.

However, it is difficult to utilize DFT calculations for comprehensive material searches. This is because simulations such as DFT calculations at present are computationally expensive. In addition, the more complex the structure is, the longer the calculation time becomes.

However, there is an issue. That is the lack of versatility. In many cases, models created with data sets for specific substance groups cannot be used to predict other substance groups. It is also extremely difficult to accurately predict the performance of substances with unknown structures. Thus, NNP also has significant challenges. However, inspired by the results that NNP can predict accurately even with a small number of data sets and parameters, we aimed to build a general-purpose model using NNP in this study.

In particular, the dataset prepared in this study has the following characteristics.

Finally, in this study, we developed a model called Pre-Ferred Potential (PFP), which is a general-purpose NNP. The PFP can handle various combinations of 45 elements in the periodic table. The PFP model is mainly used to predict the potential energy surface, which is the basis for the prediction of physical properties, from the atomic structure.

The NNs of the neural network potentials (NNPs) are multiplied by several properties for the description of the atomic structure.

For example, Atomic Environment Vectors (AEVs) and node-based Machine-Learning Potentials (MLPs) represent the positions of atoms in terms of bond distances and angles.

They can adequately represent location relations while maintaining the invariance described above. However, they have the disadvantage that they do not have a message-passing mechanism like Graph Neural Networks (GNNs), which makes it difficult to convey location information over a distance. Therefore, as shown in Table 1, various existing methods are built to handle higher-order features in GNN structures. 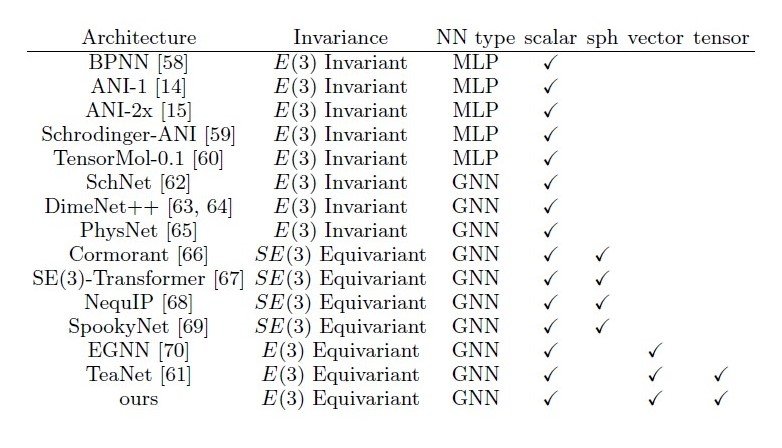 Among these, TeaNet has E(3) invariance and can handle higher-order features such as second-order tensor quantities.

Therefore, the authors have adopted a GNN structure with TeaNet-style tensor-based convolutional layers as the core of the model addressed in this study. Although the NNPs structure in this study is a GNN structure, it is a local interaction model and is set up so that infinitely distant atoms do not interact with each other. This setting leads to reduced computational cost and improved versatility.

And in DFT and molecular dynamics calculations, the stability of the calculation contributes to the smoothness of the resulting energy surface. Occasionally, higher-order derivative calculations may be required.

Therefore, the structure of our model is designed so that the energy is differentiable to higher orders concerning the atomic position.

Public datasets such as Materials Project (MP) contain data of "optimized structures" of materials obtained by DFT calculations and so on. However, the optimized structure alone is not sufficient to realize the generic potential for material discovery.

This is because chemical reactions, diffusion phenomena, and crystal phase changes often proceed in states that are far from the optimized structure. Therefore, in this study, in addition to the optimized structure, oscillatory and disordered structures were collected as data to realize a generic potential. As the data set continues to expand, this mechanism for learning data under various conditions is expected to become more effective.

Table 2 shows the list of public datasets and the types of data in the dataset constructed in this study (bottom).

As a system, the

and the public dataset holds only a part of each of them, while the dataset in this study is exhaustive. 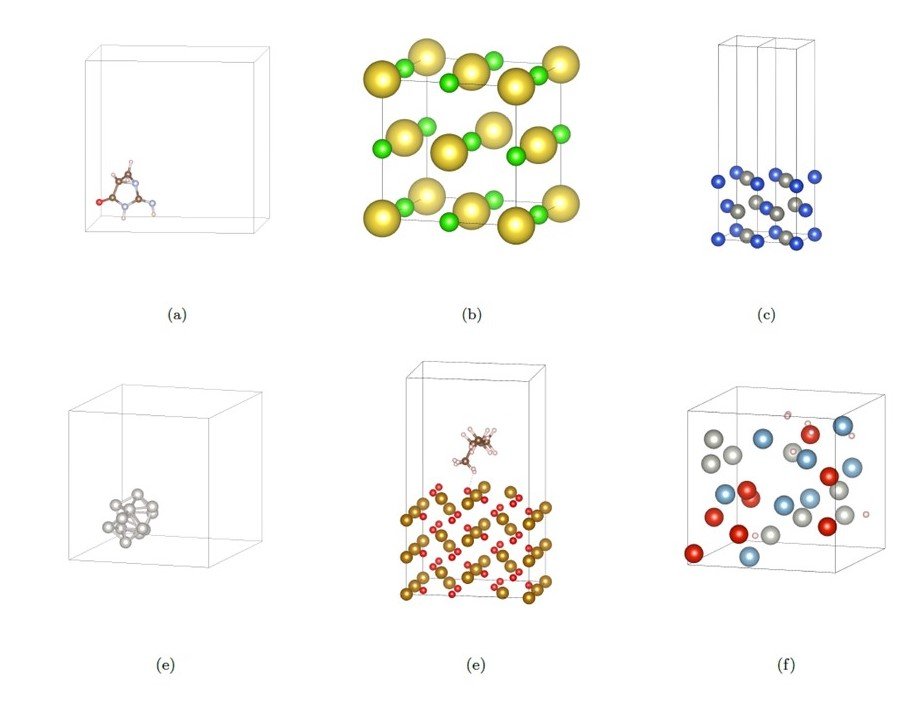 And as for the structure

etc., and our dataset has data for these various structures. The data set also covers 45 kinds of elements.

The calculation speed of PFP

We evaluated the calculation speed of DFT calculation and PFP, which are typical simulation methods. Surprisingly, PFP takes only 0.3 seconds to calculate 3000 platinum (Pt) atoms.

However, to train the model, we have to use data sets obtained mainly by DFT calculations. This is where public databases should be used as effectively as possible.

Application examples of PFP and its performance

We will now introduce two prediction tasks for the system using PFP.

The first example is the prediction of the diffusion behavior of lithium ions in materials used in lithium-ion batteries.

One of the important properties of lithium-ion batteries is their charge and discharge rate. The higher the diffusion rate of lithium ions in the material used, the lower the activation energy (like an energy barrier for the reaction, the lower the energy barrier the faster the reaction) and the higher the charge/discharge rate. Normally, calculation of activation energy by DFT calculation requires the calculation of the intermediate, or transition, state between the pre-reaction and post-reaction states.

In this study, the activation energy of lithium-ion diffusion in LiFeSO4F was obtained by the CI-NEB method (the detailed explanation is omitted because it is a term related to DFT calculation) using PFP.

The obtained diffusion paths of lithium ions in LiFeSO4F are shown in Figure 3. The activation energies obtained are shown in Table 3. 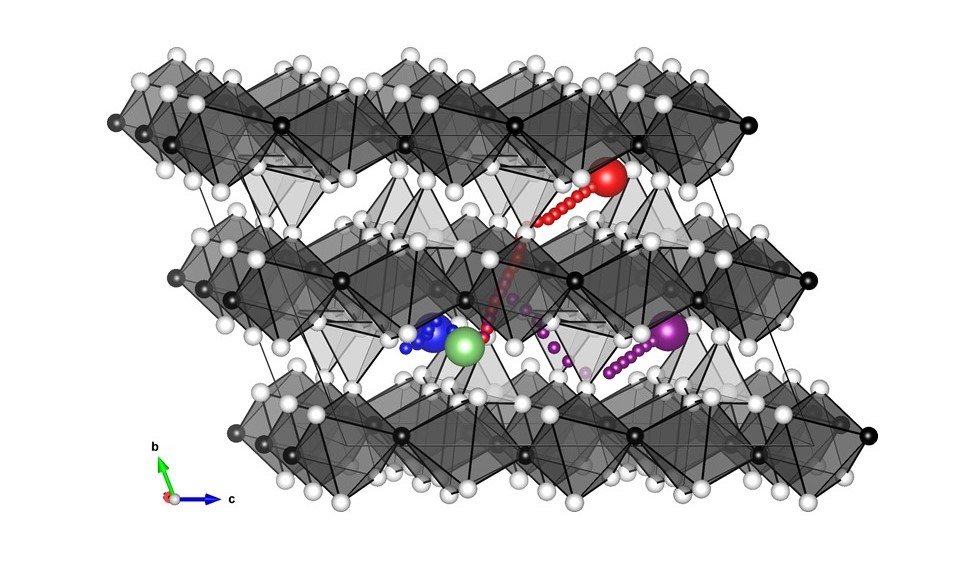 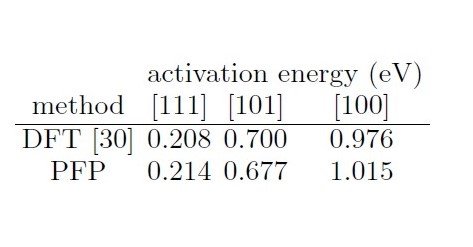 As a result, the PFP reproduces well the diffusion behavior only in the one-dimensional direction obtained by the conventional DFT calculation.

Moreover, surprisingly, PFP accurately calculated the energies of the transition states that are far from the optimized structure, even though no prior information on the transition states or reaction mechanism was given. Incidentally, PFP took only five minutes to perform this calculation on a single GPU.

-Exploring the catalytic materials for the Fischer Tropsch reaction

The following example is a catalytic materials search for a reaction called the Fischer Tropsch reaction.

This reaction is an industrial catalytic reaction that synthesizes various hydrocarbons ( CxHy ), which can also be used as fuels, from hydrogen ( H2 ) and carbon monoxide (CO) gases. It consists of complex elementary processes.

Nanoparticles of cobalt (Co) are loaded on the surface of a material called a support, which acts as a catalyst to promote the reaction. In this example, we are particularly interested in the methanation reaction and the carbon monoxide (CO) dissociation reaction, which are important elementary processes in this reaction.

Figure 4 shows the correlation between the values of activation energies in the methanation reaction obtained by PFP and conventional DFT calculations. The existence of several different activation energies is considered to be because several tests were performed with different elementary processes and reaction conditions. The results show that the correlation coefficient is 0.98 and the MAE is 0.097 eV, which means that the prediction was successful with high accuracy. 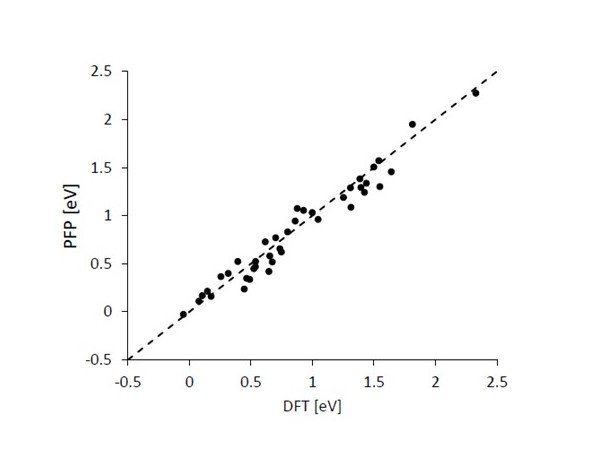 Then, we searched for additive elements that promote the CO dissociation process on the cobalt surface.

The CO dissociation process is an important elementary process in the Fischer-Tropsch reaction, and it is important to reduce the activation energy of this process to create effective catalytic materials.

However, it is not cost-effective to perform an exhaustive search for added elements only by DFT calculations, so we tried to improve the efficiency by PFP. The screening was performed by replacing some of the cobalt atoms in the cobalt catalyst with other atoms. The results of the activation energy calculation are shown in Figure 5.

Eleven elements were tested and it was found that vanadium (V) reduced the activation energy by nearly 40%.

Although vanadium was known to be effective in previous studies, PFP did not provide this prior information. In other words, it can be said that we succeeded in efficient and effective screening by PFP. In addition to the above two examples, other examples showing the effectiveness of PFP have been introduced. If you would like to know more, please refer to the original paper.

The PFP introduced here is Version 0, and a project to develop the PFP is still in progress.

Data set side: Expansion of the applicable range of element types, parameters, and structures that can be handled

Model structure side: Attempt to introduce charge transfer and long-range interaction between atoms into the model

Looking at the current official Matlantis website, the number of applicable elements seems to be even higher. (Currently, 55 elements are supported) Official site

In this article, we introduced the substance search by PFP, which has versatility potential.

This PFP has powerful expressive and descriptive power by learning an unprecedentedly diverse data set of materials with a unique GNN structure.

As a result, we obtained a model (potential) with excellent versatility, which does not require the training of a model for each task. Conventionally, the extrapolation task, which is important for the search for unknown substances, has been difficult and there have been few effective models. However, this PFP has a great potential to be applied to such extrapolation tasks. We look forward to future work.

And in the future, by learning even more diverse data sets with the improved PFP and improving its expressive power, it may become like an expert machine for materials. It's exciting. 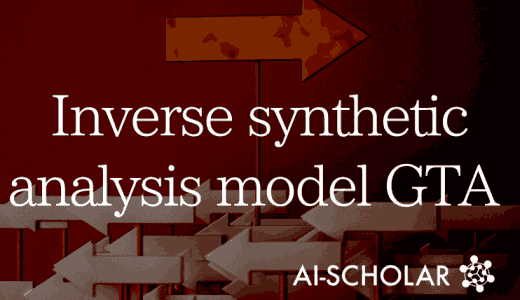 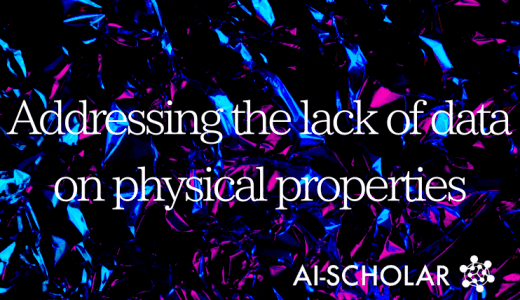 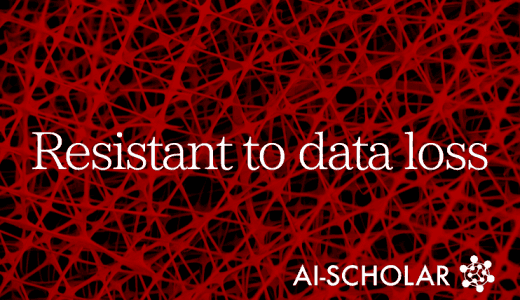 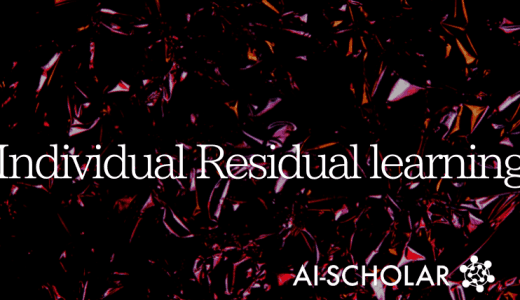 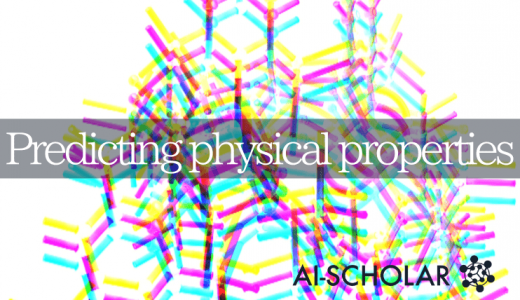