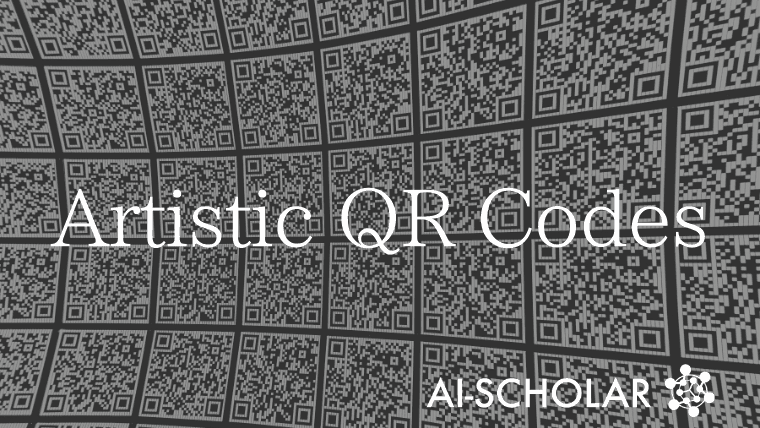 In this article, we introduce our research on generating art-like QR codes using Neural Style Transfer.

In the proposed method (ArtCoder), QR Code can be generated from a source image (Content), a target image (Style) and a message to be set, as in a general image style transformation, as follows.

If you scan this image with your smartphone or other devices, you will see the string "Thank you for reviewing our paper.

The pipeline of the proposed methodology is as follows

In this case, the objective function (loss function) $L_{total}$ of $Q=\Psi(I_s,I_c,M)$ is defined by the following equation which combines three loss functions.

The $\lambda_1,\lambda_2,\lambda_3$ are parameters that indicate the weights of the three functions.

In addition, style loss $L_{style}$, content loss $L_{content}$, and code loss $L_{code}$ are used to preserve the style, content, and message content of QR Code, respectively. Let's look at each loss in turn below.

The style loss $L_{style}$ and content loss $L_{content}$ are used to ensure that the generated QR Code retains its style and content contents. Specifically, according to the existing work on style transformation (1, 2), they are defined by the following equations

where $G$ denotes the Gram matrix and $f_s(,f_c)$ denotes the feature map extracted from the $s(,c)$-th layer of the pre-trained VGG-19.

The code loss $L_{code}$ is used to control the content of the generated QR code using the SS Layer (Sampling-Simulation layer), a virtual QR code reader that simulates the sampling process of the QR code reader.

In Goole ZXing, which is used to decode QR Codes, the QR Code reader samples and decodes the center pixel of each module (the black and white squares in the QR Code).

When reading a QR code with a QR code reader, the probability $g_{M_k(i,j)}$ that a pixel existing at the coordinate $(i,j)$ with the center of each module as the origin is sampled is considered to follow the following equation.

In the Sampling-Simulation layer, based on the aforementioned equation, the sampling process when the generated QR Code is read by an actual QR Code reader is simulated to improve the robustness of the QR Code reading. 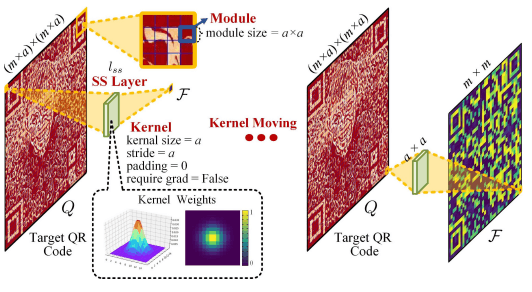 Specifically, for each module $m-dis-m$ (each with $a-dis-a$ pixels) in the QR code, we perform a convolution operation with kernel size $a$, stride $a$, and padding 0, and output the feature map $F=l_ss(Q)$ of $m-dis-m$.

The $F_{M_k}$ is considered to simulate whether each module is decoded as 0 or 1 when the QR code is actually read by a QR code reader.

where $L^{M_k}_{code}$ is given by the following equation.

where $\textit{M}$ is an $m×m$ matrix representing the target QR code and whether each module should be 0 or 1. Also, $K$ is the activation map computed by the competition mechanism described below.

By controlling the activation map $K$, the competition mechanism decides whether to prioritize and optimize the visual quality of the generated QR code ($L_style, L_content$) or whether the QR code can be accurately read by a QR code reader ($L_code$ ).

The pipeline for this competition mechanism is shown in the figure below. 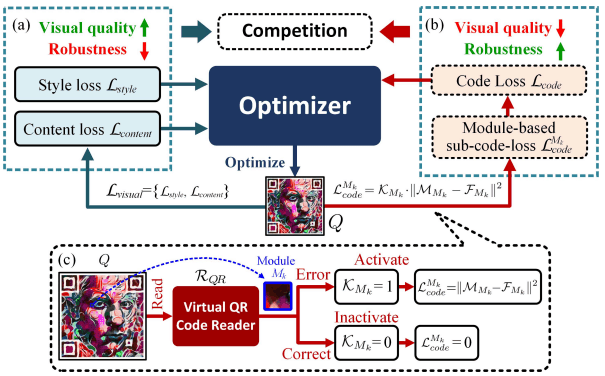 Specifically, the activation map $K$ is 0 if the module $M_k$ is correct and 1 if it is wrong when the QR code $Q$ is read by the virtual QR code reader $R_{QR}$.

When a normal QR code reader reads QR code $Q$, QR code $Q$ is converted to grayscale, and binarization is performed as follows according to the value of each module.

Here, $T$ is the threshold for determining whether a module is black or white.

On the other hand, when reading a QR code $Q$ with a virtual QR code reader, binarization is performed for each module $M_k$ as follows.

Based on the above, the loss function is optimized according to the pipeline described above, and the generated QR code is updated iteratively.

About the quality of the generated QR Code

To begin with, the results of comparison with existing NST (Neural Style Transfer) techniques or QR code generation methods are as follows. 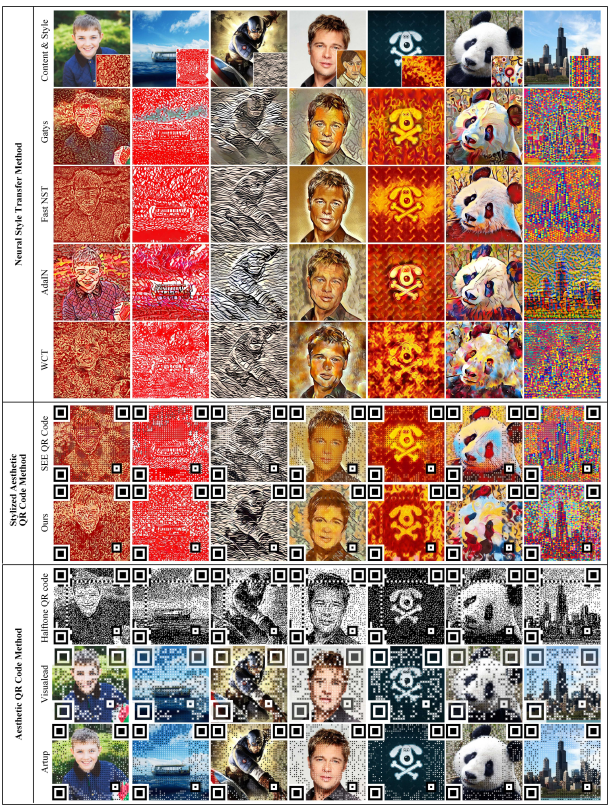 Comparing Ours with the others, the generated results are of lesser quality than the existing NST examples, and do not produce a large amount of point-like noise as compared to existing art-like QR code generation methods.

For the weight parameter $\lambda$.

Here are the results of varying the $\lambda_2$ for content loss among the weight parameters.

As shown in the figure, it can be seen that the generated image can be controlled by varying the weight parameter.

On the Robustness of QR Code Reading

In the following experiment, we verify the robustness of the generated QR Code to be read by a real application.

The following image shows a case in which a part of a generated QR Code is enlarged. 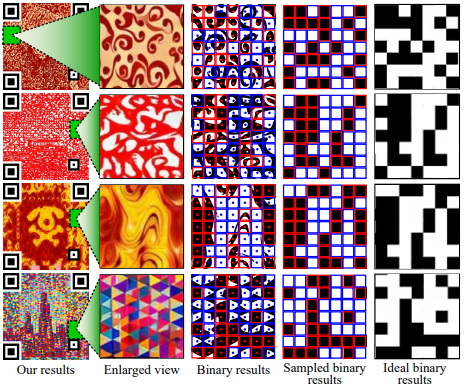 If you look at the center of each module after binarization (blue and red circles in Binary results), you can see that the black and white regions are well separated for each module, and the result after sampling is the same as the ideal result.

For the parameter $\eta$, which indicates the robustness

The results for varying the robustness parameter $\eta$ are as follows. 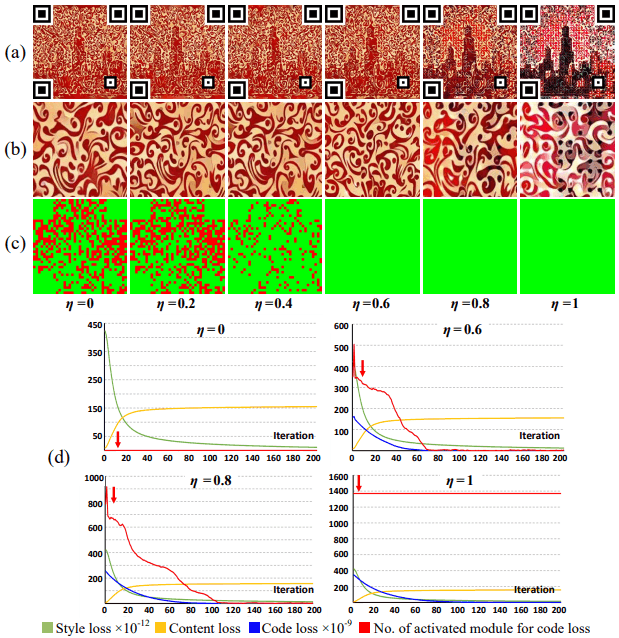 Among the figures, (a) shows the generated image, (b) shows a magnified part of it, (c) shows the error module, and (d) shows the magnitude of each loss.

About the success probability of reading

For the generated image, the following results are obtained when the image is displayed on the screen in three sizes (3cm x 3cm, 5cm x 5cm, and 7cm x 7cm) and scanned at a distance of 20cm. 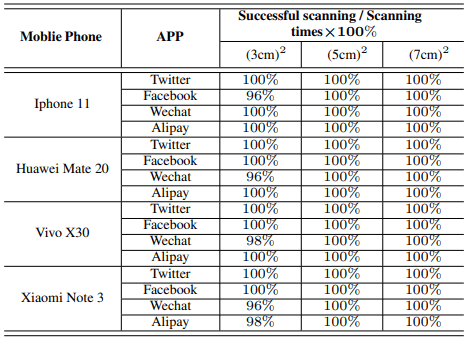 This table shows the average number of successful scans for 50 scans of 30 QR codes using each mobile device (successful decoding within 3 seconds is considered successful).

In general, the success rate is at least 96%, indicating that the proposed method is robust enough to be effective in real applications. (Even when the scan failed, the read seemed to succeed although it took more than 3 seconds to complete.)

The effect of distance and angle on reading

The results of the comparison with the existing method when changing the distance and angle and $\eta$ are shown in the following figure. 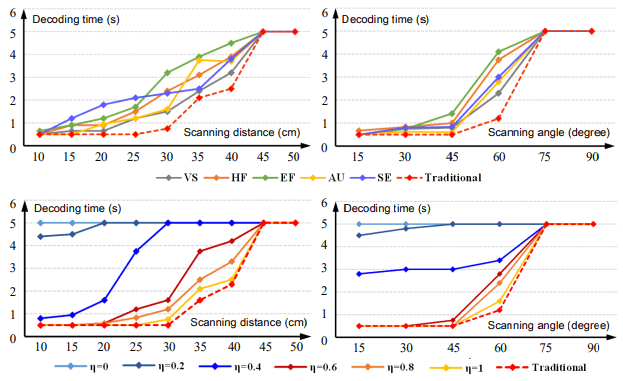 As a result of the comparison, when $\eta>0.6$, the robustness of the proposed method is equal to or slightly inferior to the existing methods, and it is robust enough to be used in practice.

In this article, we have presented our work on generating art-like QR codes using Neural Style Transfer. The proposed method (ArtCoder) is capable of generating QR codes with excellent quality and robustness that can be read by real-world applications.

However, if the generation speed is sufficiently improved in future research, we may see the day when we encounter eye-catching QR Codes with an artistic style in the real world! 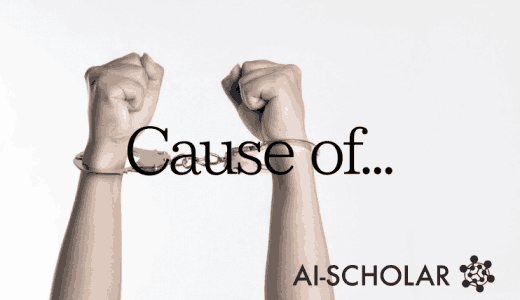