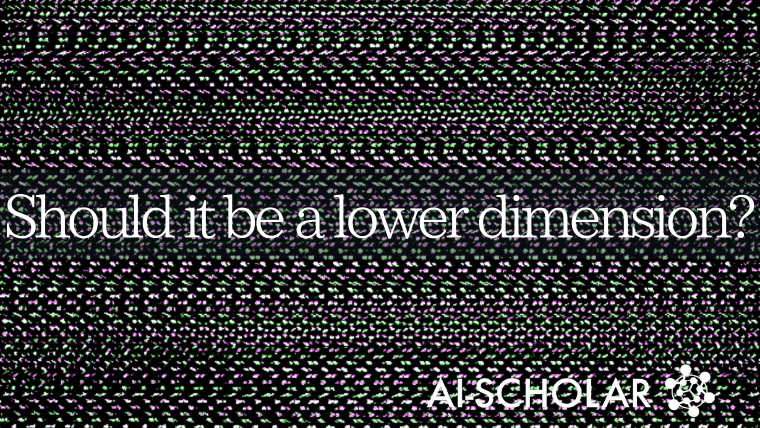 Should Feature Expressions Be Low-dimensional?

The most critical problem in deep learning is representation learning, which extracts important features from the raw input data and obtains latent representations that are useful for solving the task.

For example, let's say you want the AI to play a block-busting game. In this case, the input data would be RGB images of tens to hundreds of pixels in height and width, and the number of input dimensions would be in the thousands to tens of thousands. Deep reinforcement learning does not use such high-dimensional data as it is. First, important features are extracted using CNN and so on, and then transformed into a latent representation with fewer dimensions. This low-dimensional representation is then used for effective learning. Intuitively, the key to solving block collapses would be the position of the block, the ball, and the bar to be manipulated.

So what happens if, on the other hand, you get a high-dimensional latent representation from low-dimensional input data?

In other words, are high-dimensional latent representations for inputs useful in solving tasks?

The paper presented here is a study that provides an affirmative answer to this question about representational learning in deep reinforcement learning.

In reinforcement learning, the agent receives observations $o_t$ and rewards $r_t$ from the environment at some time $t$ and chooses an action $a_t$.

The architecture of OFENet is as follows

This can be expressed as a formula as follows

In other words, the convolutional operations of DenseNet are replaced by a MultiLayer Perceptron. So, as with DenseNet, the inputs and outputs of the lower layers are included in the final output. In our experiments, in addition to MLP-DenseNet and MLP (the usual multilayer perceptron), we also used a ResNet-tuned MLP-ResNet, which, like MLP-DenseNet, replaces the ResNet convolutional operations with a multilayer perceptron format.

To mitigate this problem, we use Batch Normalization to suppress the change in distribution.

The goal of a reinforcement learning algorithm is to learn measures that maximize the cumulative reward. OFENet needs to learn high-dimensional state and behavioral representations to help it learn such measures. To do so, we use an auxiliary task that takes the observation/behavioral representation $z_{o_t}$,$a_t$ as input and predicts the next observation $o_{t+1}$.

In order to get the full performance of OFENet, it is necessary to choose the right hyperparameters. However, optimal hyperparameters are strongly dependent on the environment and the reinforcement learning algorithm.

In this way, the hyperparameters are efficiently determined without actually having the reinforcement learning agent interact with the environment to learn.

In our experiments, we verify the performance based on a continuous control task where the input is low-dimensional.

All experiments are conducted in the MuJoCo environment.

First, the results of the comparison between the case with and without the representation obtained by OFENet (original) are shown below.

As mentioned earlier, OFENet is used in combination with existing reinforcement learning algorithms. The algorithms used here for comparison are as follows

Also, instead of OFENet, we use a representation generated using ML-DDPG for comparison.

In this case, we combine ML-DDPG and SAC (corresponding to ML-SAC in the following figure). The number of dimensions of the representation is examined both for the original case (1/3 of the input dimension) and for the same dimension as OFENet (OFE like).

As it can be seen from the figures and tables, the performance of ML-SAC was higher than that of ML-DDPG, an existing method of representation learning (ML-SAC), and that of the original method without MFE (original).

OFENet used MLP-DenseNet, which replaces the DenseNet convolutional layer with a multilayer perceptron. Instead of this MLP-DenseNet, MLP-ResNet and MLP would look like the following figure.

As you can see in this figure, the most outstanding performance is seen when using MLP-DenseNet. It is not easy to properly construct a high-dimensional representation, as network changes have a very significant impact on performance.

In order to examine other elements of OFENet's architecture that contribute to performance improvement, we conduct ablation studies on the following examples. We use SAC for the reinforcement learning algorithm and Ant-v2 for the simulation environment.

full: when the full OFENet representation is used.
original: Original SAC
no-bn: No Batch Normalization
no-aux: no auxiliary task
The same number of SAC parameters as OFENet.
Freeze-ofe: Train and fix the OFENet first, then train the reinforcement learning algorithm.

As shown in the figure, the simultaneous training of the auxiliary task, Batch Normalization, and the OFENet and reinforcement learning algorithms contribute to the performance improvement of OFENet.

Thus, we found that the performance improved up to a certain threshold as the number of dimensions increased.

This is a very important and promising study that throws a stone at the stereotypes of expression learning.