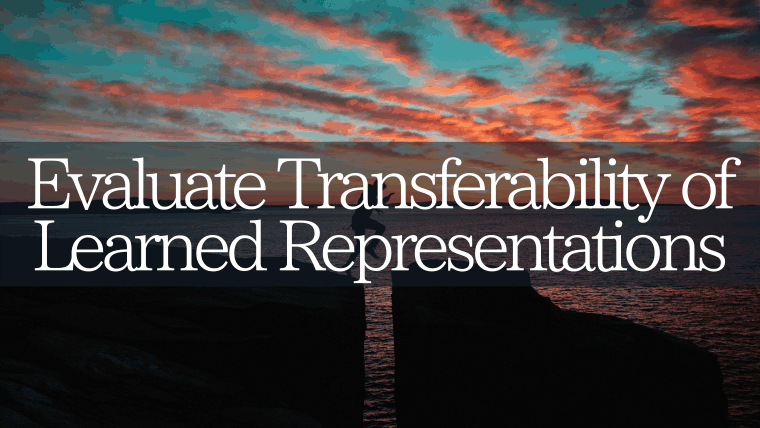 3 main points
✔️ Proposes LEEP, a metric that predicts with high accuracy which learned models should be used for transfer learning to produce accurate models
✔️ Faster computation because we only need to make predictions once for data in the target domain using the learned model
✔️ The first metric that shows a high correlation with the accuracy of recently proposed Meta-Transfer Learning

Now, this brings us to one question. What is the best-trained model for my data set? Here, we assume that the data to train the original learned model is fixed (such as ImageNet above). For example, ResNet, which solves the gradient vanishing problem of deep learning models, and MobileNet, which can run on CPU.

Of course, if you have enough computational resources, you can relearn using all possible models and choose the one with the best accuracy among them. However, general companies do not have such abundant computational resources, and they have no choice but to select and relearn models that they think are good within their limited computational resources. If it is possible to find a sub-optimal model with a small amount of computation, it would be very beneficial for companies. Given a trained model and a target dataset (a dataset to be re-trained), the goal of this research is to select a sub-optimal trained model that achieves good accuracy on the target dataset with a small amount of computation. We have proposed LEEP as a metric for this purpose, and have succeeded in selecting the optimal model with higher accuracy than conventional methods. Let's take a look at what LEEP is and how it works.

Meta-transference learning is a very new research area proposed in 2018. The goal of meta-transference learning is to learn how to transfer from a source task to a target task. It may not sound quite right when expressed in letters, but research in educational psychology has shown that this is something that humans do on a daily basis. For example, let's consider a child who is good at chess. That child learns that the experience gained in chess can actually be applied to math and puzzles. As the child grows, he or she will have many experiences (building a desk with tools, playing nicely with friends, etc.) and when faced with a new and unknown task A, he or she will be able to use what he or she has learned to determine what task B can be used to help solve task A and how. In other words, we can learn how to transfer between tasks. In other words, they are learning how to transfer between tasks. The following figure shows the difference between transfer learning, multi-task learning, continuous learning and meta-transfer learning, and experiments have shown that LEEP is a good indicator of the accuracy of this meta-transfer learning.

Task space representation is an attempt to represent a very ambiguous thing called a task by a vector. For example, a method called TASK2VEC is famous and has been reported in AI-SCHOLAR. It represents tasks as vectors, and by measuring the distance between the vectors, it is possible to determine which dataset the model trained on should be used for transfer learning. However, TASK2VEC obtained a representation of the task by training a large model called a probe network and applying it to the target data. This means that it has the disadvantage of requiring ample computational resources. 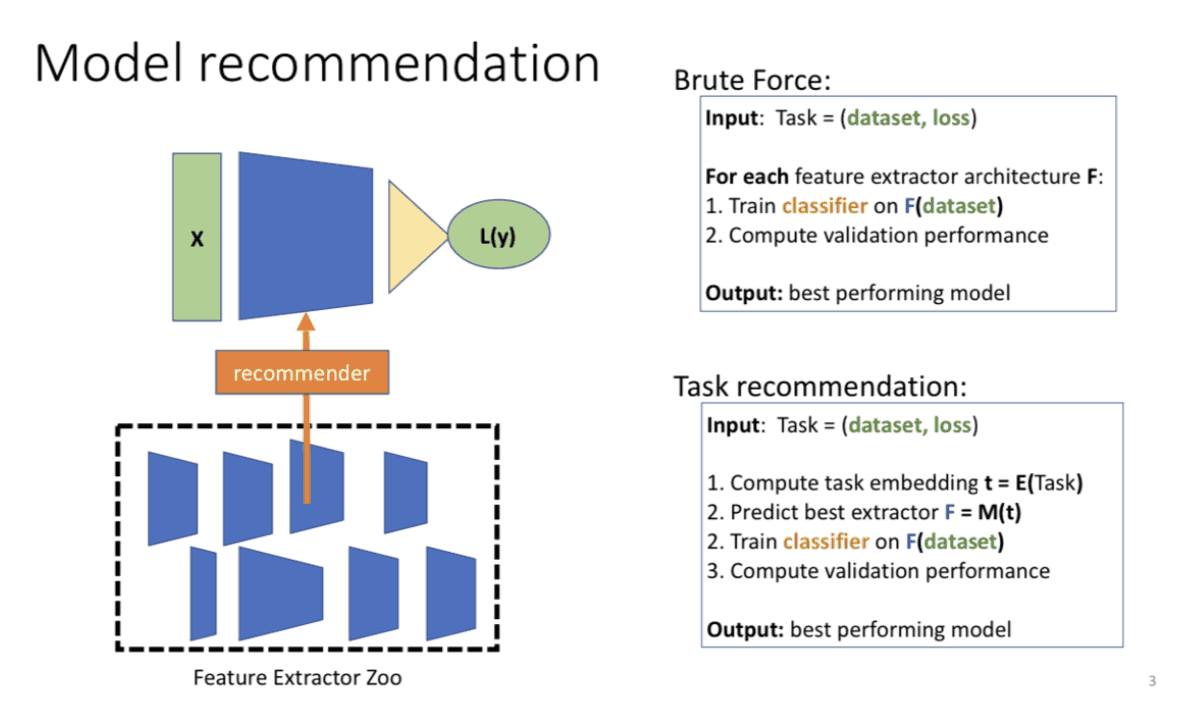 Now we will look at the proposal method. The proposed method consists of three steps.

We'll look at each of these steps in detail.

(1) Calculate the dummy label distribution of the target dataset with the learned model.

To calculate the simultaneous probability distribution of y and z, we are taking the sum of all dummy label distributions that satisfy yi=y. In other words, we are calculating the distribution of the data given the label y.

We have calculated $θ(x)$ and $P(y|z)$, let's consider a classifier that predicts the label of x. First, we compute the label z from the dummy label distribution. Then, using the label z Compute y from $P(y|z)$. This means that $P(y|x,θ,D)$ = $ΣP(y|z)θ(x)$, which is equivalent to computing y from the probability distribution (Σ is computed for all z.) LEEP is defined by taking the log of this EEP and averaging it over the target data set.

Intuitively, LEEP is computed on a trained model $θ$ and a target dataset D and is a measure of how close $θ$ is to D. By looking at the theoretical properties of LEEP, we can see how right this part is.

First, we decompose $θ$ into a feature extraction mechanism $ω$ and a classifier $h$. In other words, $θ$=($ω$,$h$). Next, we consider replacing only the classifier part and retraining it in D. In this, we consider the problem of choosing the optimal classifier. This can be expressed by the following equation.

The following properties illustrate the relationship between LEEP and a recently published measure of metastability, negative conditional entropy (NCE), which has been shown to be a good measure of metastability. For every input xi in the target dataset D, we calculate the dummy label zi=argmax$θ(xi)$, where Y=(y1,y2...yn) and Z=(z1,z2...zn), as follows.

In this experiment, we use ResNet18 trained on ImageNet and ResNet20 trained on CIFAR10 as trained models. We transfer train these two models to CIFAR100. In this experiment, we compare the accuracy and LEEP of the transfer-trained models on 200 different tasks (we randomly select 2~100 classes from CIFAR100 and iterate them to build 200 different datasets). In this section. We are experimenting with two types of models: Re-train head (replacing only the classifier and retraining only the classifier part) and Fine-tune (replacing the classifier and retraining the whole model). See the figure below. We can see that for both trained models, the accuracy of LEEP and the re-trained model are highly correlated.

LEEP vs. Convergence of Fine-tuned Models

In the next experiment, we use LEEP to predict the speed of convergence of fine-tuned models. to measure the speed of convergence of fine-tuned models, we randomly select five classes from the dataset as Reference models and train them from scratch using all the samples in the classes. The fine-tuned models are selected from the same five classes as above from CIFAR100, and each class is trained with 50 images. Please see the following figure. The black dotted line (0.0) in the figure is the area where the difference in accuracy between the scratch model and the Fine-tune model is 0. In addition, level1~5 means that the value of LEEP is divided into five levels, and the larger the level, the larger the value of LEEP. The following figure shows that the convergence becomes faster as the LEEP value becomes larger.

In the next set of experiments, we investigate the correlation between the values of the latest metrics of transfer learning (NCE, H scores) and the latest methods of meta-transfer learning, CNAPS and LEEP. In this experiment, we add restrictions to the target dataset D: large indicates retraining using the entire dataset, small indicates retraining using only a part of the dataset, and imblanced indicates varying the number of samples in each class from 30~60. From the following figures, we can see that LEEP shows a high correlation compared to the latest methods. 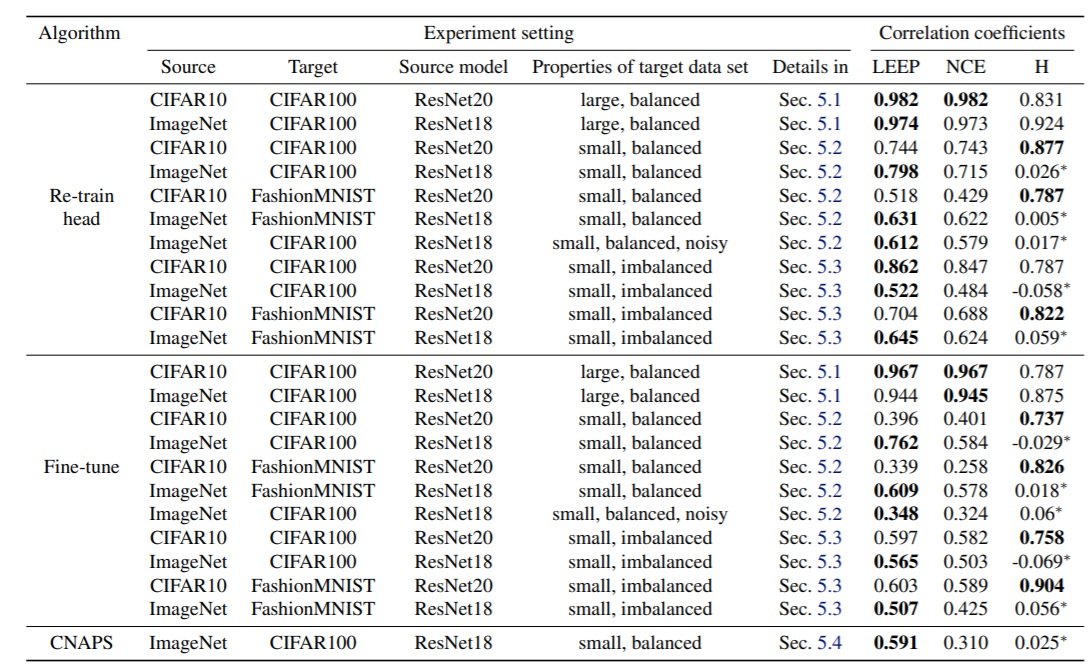 The work presented in this paper proposes a metric, LEEP, that predicts the optimal learned model efficiently and with high accuracy. The experimental results show that the LEEP values for nine different models are highly correlated with the accuracy of re-training on each model. In other words, by using LEEP, we can select a suboptimal model architecture with limited computational resources. Thus, transfer learning is a very important technique in the use of deep learning models. In this transfer learning, such a technique that can predict which learned model to choose without training would be very useful. This is a very interesting area of research, so why don't you check it out? 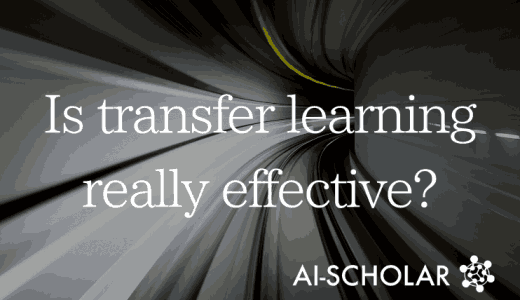 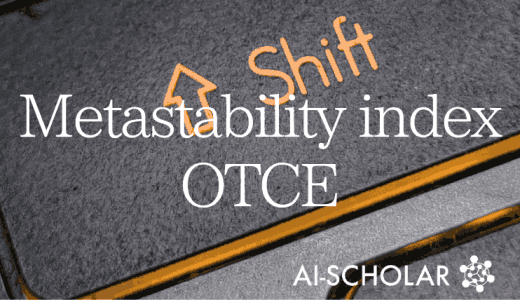