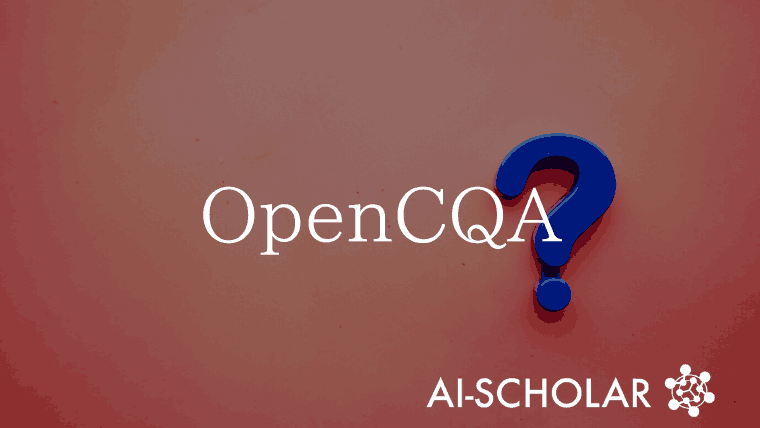 OpenCQA, The Task Of Answering Open-ended Questions About Graphs With Text, Is Here!

3 main points
✔️ Proposed OpenCQA, a new task to answer open-ended questions about graphs with descriptive text
✔️ Created a benchmark dataset for OpenCQA consisting of open-ended questions and descriptive answers about them
✔️ Validated using state-of-the-art models as a baseline and found that while the model used was able to generate fluent and consistent explanations, it had difficulty performing complex logical reasoning

Using data visualization techniques such as bar charts and line graphs to discover and explain important insights in data to others is a necessary process for many tasks, but it can be labor-intensive and time-consuming.

Chart Question Answering (CQA) is a task designed to solve these problems by taking a graph and a natural language question as input and generating an answer to the question as output.

In this paper, we propose a new task, OpenCQA, which aims to answer open-ended questions about graphs with descriptive text to solve this problem and demonstrate its effectiveness by creating and validating a benchmark data set as a baseline for this task. The paper will discuss the paper that demonstrates the effectiveness of OpenCQA by creating and validating a benchmark dataset baseline for this task.

The creation of datasets consisting of open-ended questions and annotator-written response statements has not been done previously for several reasons, including the fact that few data sources with graphs and associated textual descriptions are publicly available.

Therefore, for this paper, we decided to use graphs from Pew Research (pewresearch.org), where professional writers use various graphs and summaries to write articles on market research, public opinion, and social issues.

The OpenCQA proposed in this paper is a task that outputs the text that serves as the answer to an input question about a graph, and specifically, there are four question types as shown in the figure below.

In this paper, the following seven existing models were used as a baseline for the data set created.

For these models, we conducted validation under the following three conditions

Given the inputs in each condition and questions about the graph, the baseline model generates answers to the questions.

In this paper, two types of validation were conducted: automatic evaluation by evaluation indicators and human evaluation of the quality of responses.

Verification results under Setup1-3 conditions are shown in the figure below. 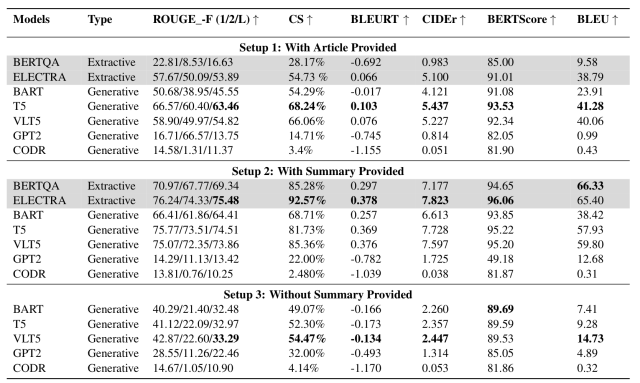 From this table, we found the following

These results show that for most models, the best performance is achieved when given a "graph + associated summary".

To further assess the quality of the responses generated by the model, a comparative validation was performed by three native English-speaking annotators on 150 graphs randomly selected from the OpenCQA dataset.

VLT5, the best-performing model in the automatic evaluation, is used as the comparison model and is denoted as VLT5-S and VLT5 with and without summary text, respectively.

Annotators evaluated the model-generated responses based on three criteria employed in existing studies.

Based on these three criteria, the annotators rated the products on a 5-point scale from 1 (worst) to 5 (best).

The results are shown in the figure below. (Correct answers are marked as Gold.)

On the other hand, the VLT5 model received high marks for Relevance and Fluency, but there is room for improvement in Factual and CS. (The red text in the figure below shows the areas of error.) 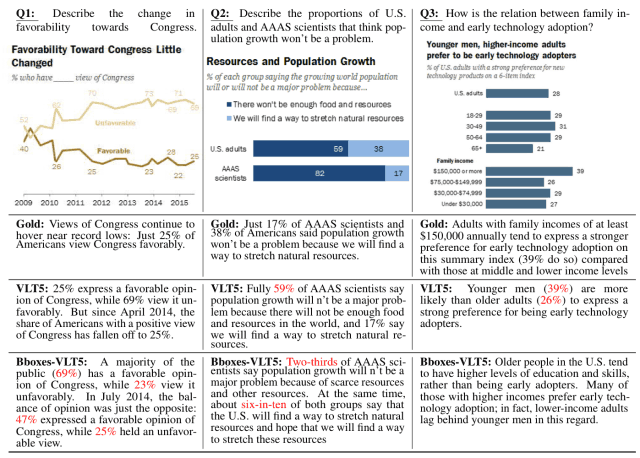 Thus, future work is needed to improve the problem that the accuracy of the generated text is significantly reduced when only graphs are used as input.

How was it? In this article, we described a paper that proposed OpenCQA, a new task to answer open-ended questions about graphs with descriptive text, and created a large data set and baseline for this task.

The author is very much looking forward to future progress, as he states that although this baseline achieved excellent results with existing evaluation metrics, the nature of the task of generating more human-like responses requires further research to build better evaluation metrics that correlate with human judgment.