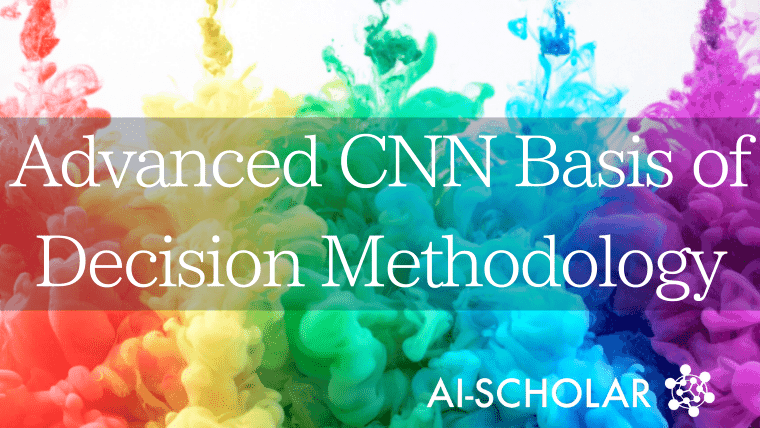 To address these concerns technology to explain the basis for decisions in deep learning models, called Explainable AI (XAI) is becoming more and more important in recent years.

XAI, which is widely used in computer vision, is a saliency map. This is a heat map that highlights the pixels on which a decision is based according to their importance. For example, suppose that the following dog and cat pictures are input to a trained image classification model and it identifies them as dogs. In this case, The saliency map would be The more evidence and important parts of the image are in red. In this case, we can see that the area around the dog's mouth is the basis of the image.

The methods in this field can be roughly classified into two types, and Group-CAM introduced here is a method that overcomes the shortcomings of each.

However, there is a problem of heavy computational cost because thousands of masks need to be generated and inferred. for inference RISE and XRAI, It is reported in this paper that it takes about 40 seconds to infer one

This line of methods infers a saliency map based on the feature maps in the backbone of the model. The feature map of the last layer is often used. The flow of inference is to determine the weights of each channel of the feature map, weight them, add them in the direction of the channel, enlarge them, and combine them with the input image. In this type of research, how to assign weights is often the main point of discussion.

A well-known method is Grad-CAM. The weights are determined by applying Global Average Pooling (GAP) to the gradients about the feature maps in the final layer.

However, there is a problem that these weights do not correctly evaluate the importance of the feature map, and that the feature map itself contains noise and includes unimportant parts.

Group-CAM, which we introduce here, is a method that solves the following problems mentioned above.

The overall architecture is as follows 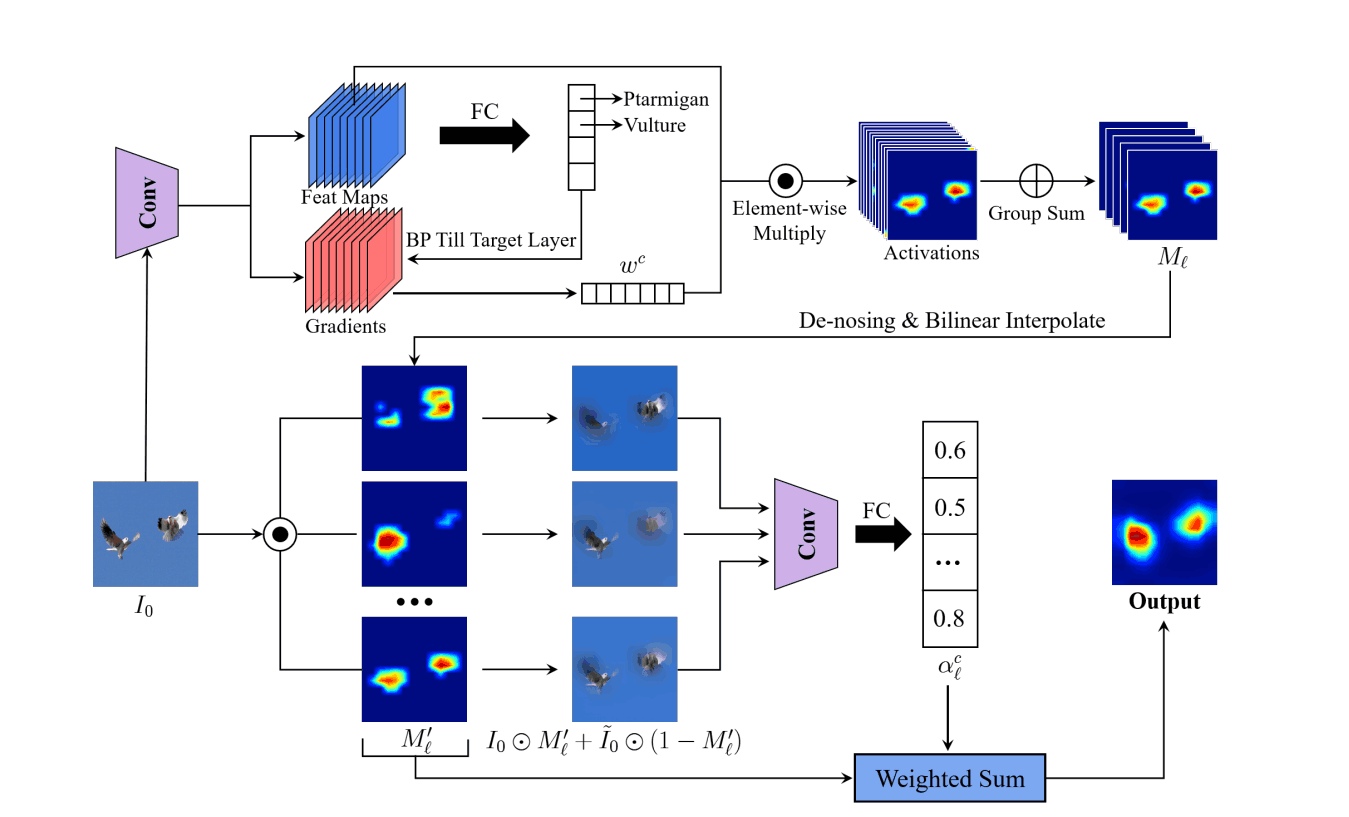 There are three phases of reasoning.

Step1. determine the weight of the feature map 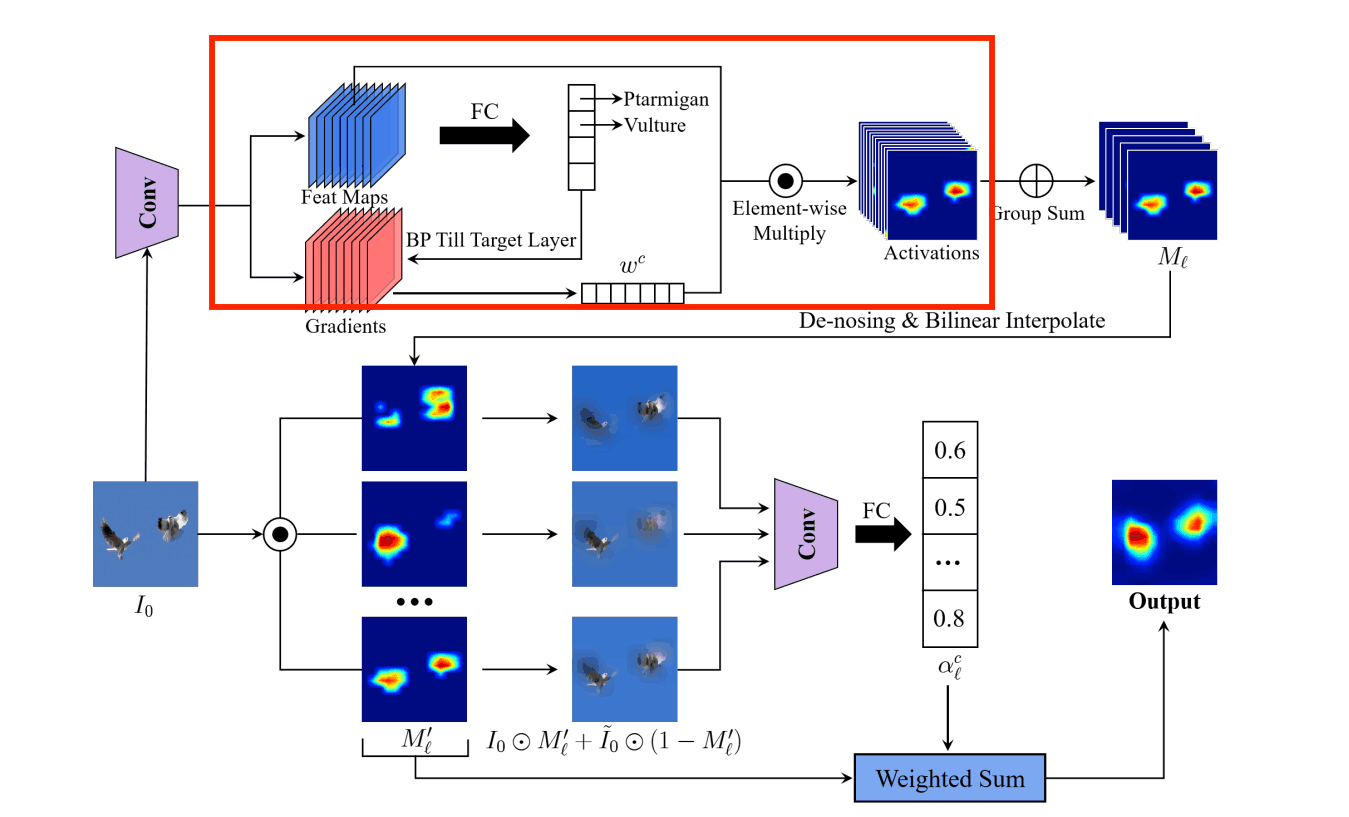 Global Average Pooling (GAP) is applied to this gradient to calculate the weights in the number of channel dimensions. wkc, the weight of channel c in the kth convolution layer, is expressed in the formula as

Step2. denoising of the feature map 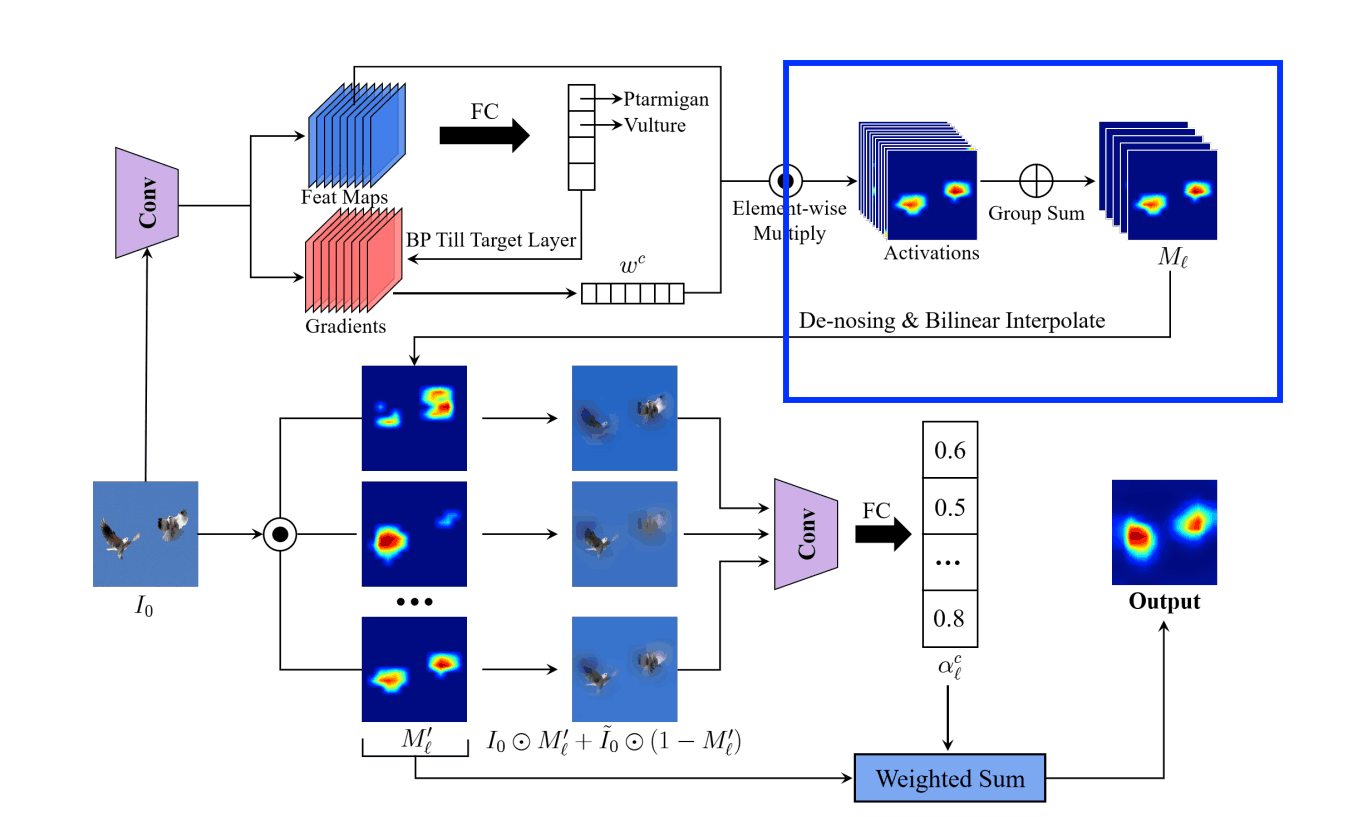 There are two things to do here.

Divide the feature maps obtained in Step 1 into G groups and summarize them into G feature maps.

The image is then normalized to be in the range [0,1] and scaled to the size of the input image by bilinear interpolation.

Step3. determine the weights of the grouped feature maps and create the saliency map 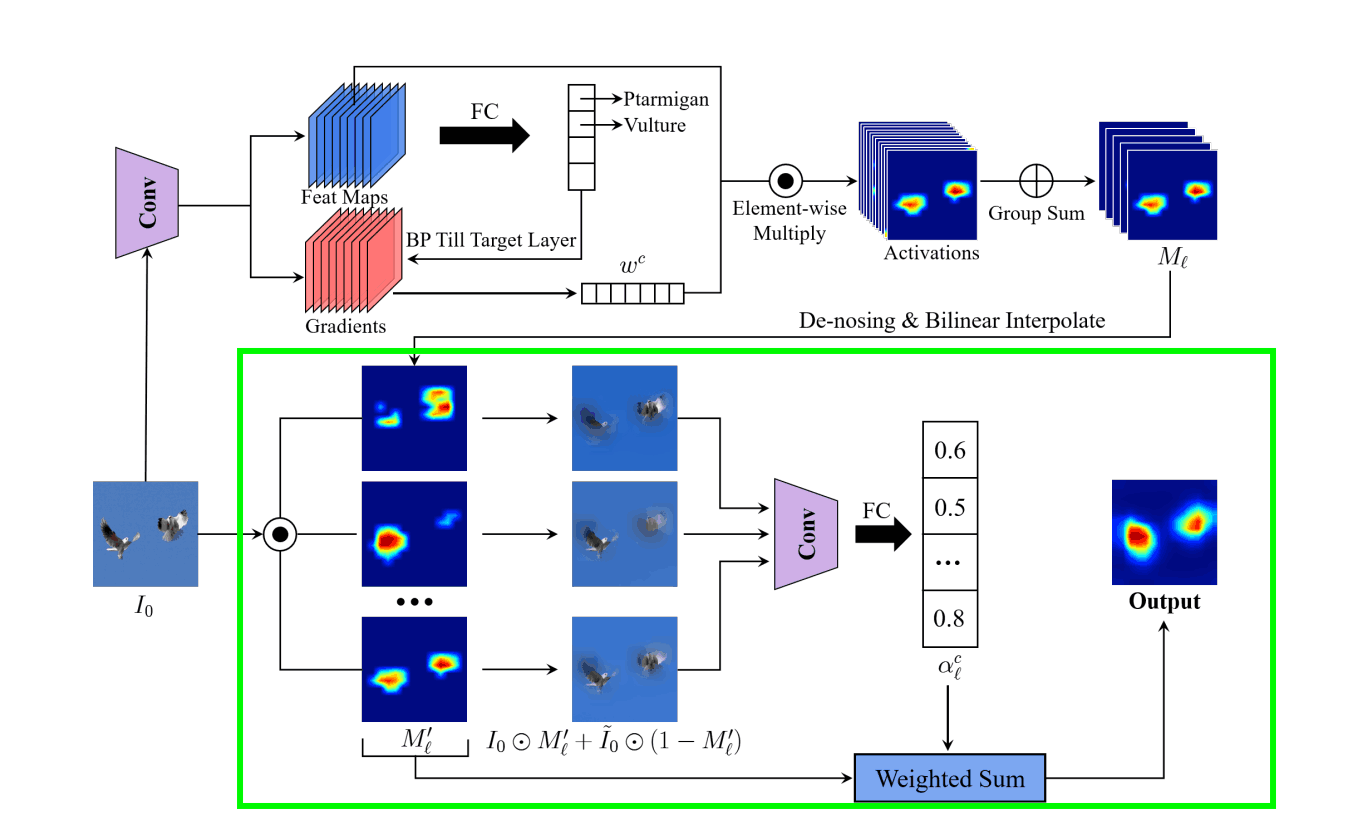 We apply the normalized feature map Ml ' as a mask to the original input image Io and also add the Gaussian blurred ĩo. The reason for adding this is that the masked input image alone may have hostile effects.

Then, the lth summarized feature map is weighted by alc to generate a heat map. 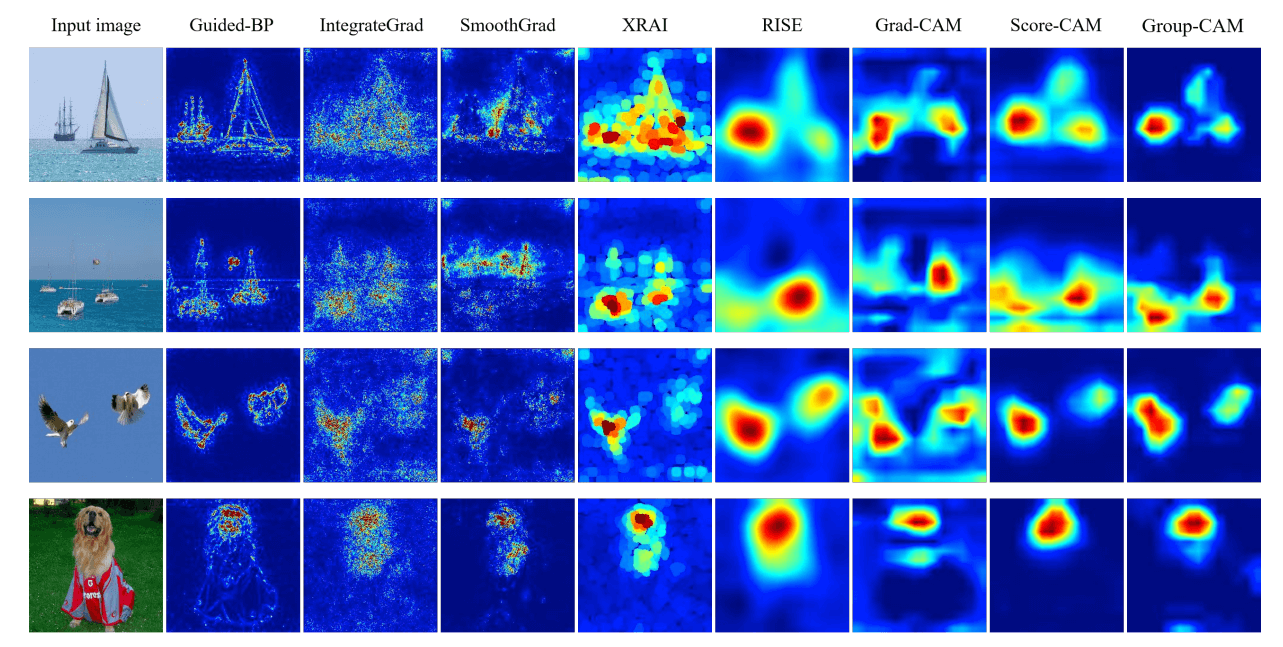 The reason behind the development of this method is that XAI in CNNs is considered to perform well if the most important part of the saliency map is located on the bounding box annotated by a human, but this is not always true since CNNs may be discriminating based on the background. However, this is not always the case because CNNs may take into account the background.

In the deletion test, the area under the curve (AUC) is used as a measure of the predicted probability of a class on the vertical axis.

In the insertion test, we add the original image to the blurred image by 3.6% according to the importance of the saliency map and use the area of the graph (AUC: Area Under Curve), where the vertical axis is the predicted probability of the class, as the index.

As you can see, Group-CAM has the best overall results. The overall rating value is calculated as AUC(Insertion) - AUC(Deletion).

The evaluation is performed using the trained model Resnet-50 on the dataset MS COCO2017 val2017. The evaluation is done by treating any salient pixel on the bounding box of an object as a Hit, and the performance value is the average value for all categories.

In our experiments, the results are 0.8% higher than Grad-CAM. 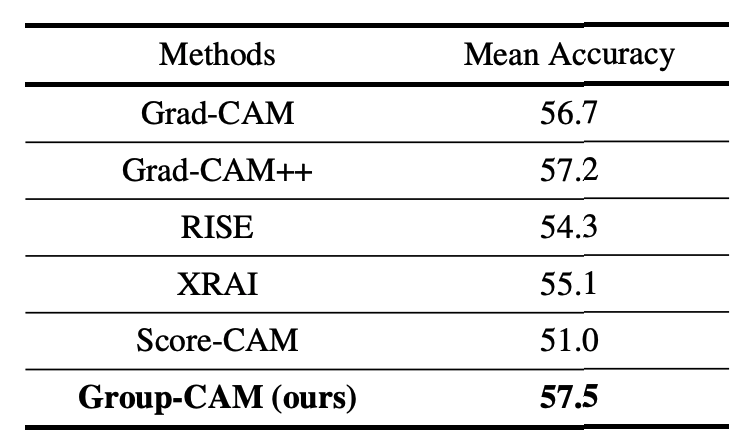 It was found that the AUC was constant when θ was less than 70 and suddenly decreased when θ was greater than 70.

We found that the more G is increased, the higher the overall AUC value is. However, increasing G raises the computational cost, so we use 32 in our experiments. 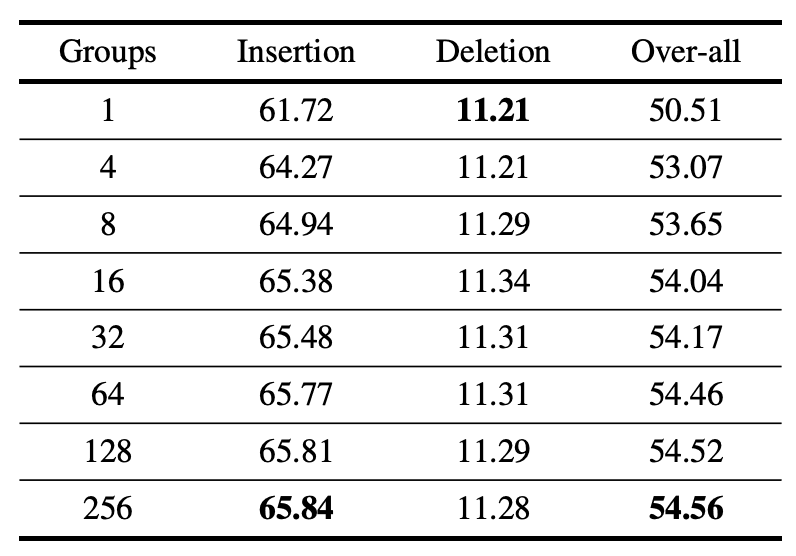 Here are the results on the NVIDIA 2080Ti GPU, showing that Grad-CAM and Group-CAM can be run as fast as 0.1 seconds or less. 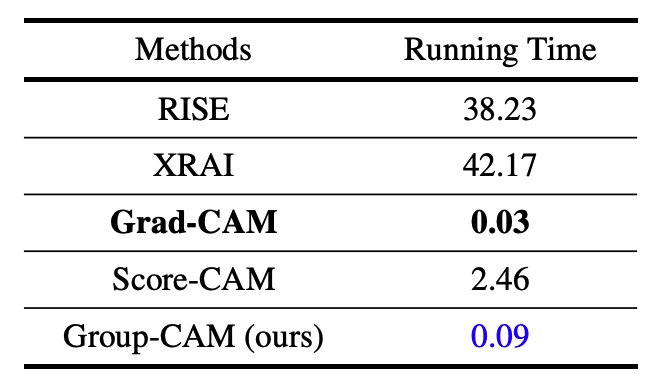 Sanity Check is a method for evaluating XAI methods presented by the team at Google Brain. If the parameters are completely different, but the output is the same, it is not a good reflection of the learning results.

In this paper, we show that the method is parameter dependent by comparing the results obtained with heatmaps obtained by initializing the classifier to the target layer. 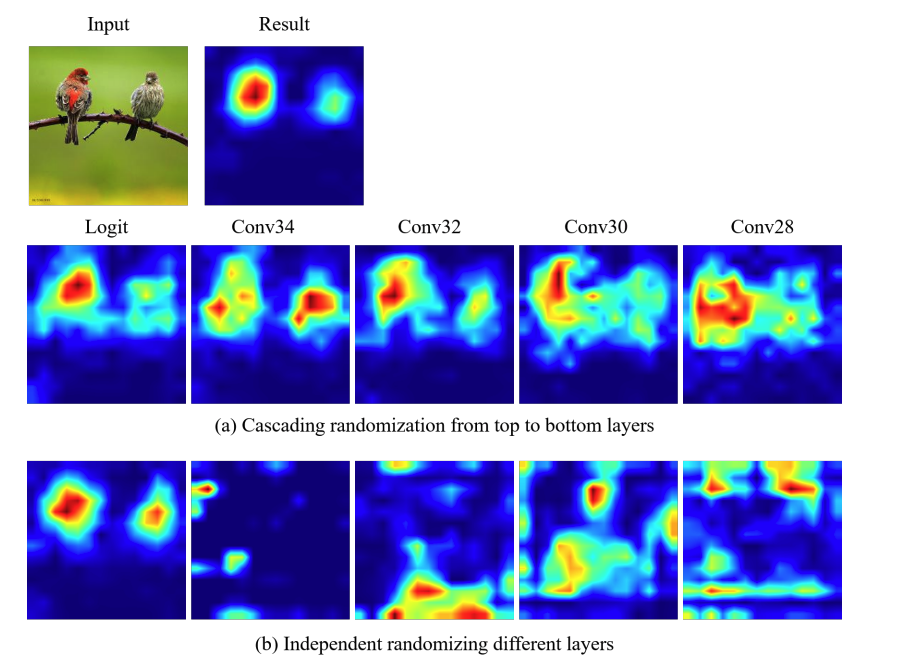 Group-CAM can also be applied to data augmentation methods. In the paper, we report that ResNet-50 improves accuracy by 0.59% on ImageNet-1k whenwkcis eliminated to shorten training time and error backpropagation is not used, and the mask is generated by Il ' where pixels below θ% are 0 and others are 1.

CNNs can be roughly classified into activation-based and region-based models, and Group-CAM can be said to be a model that compensates for the shortcomings of both, with the advantages of reduced noise and low computational cost for inferring the basis of a single decision when using Grad-CAM. It will be interesting to see how this research will be applied to the visualization method of ViT in the future. 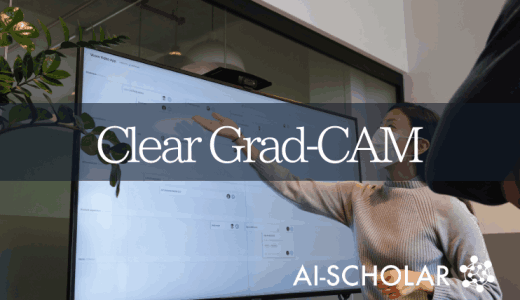