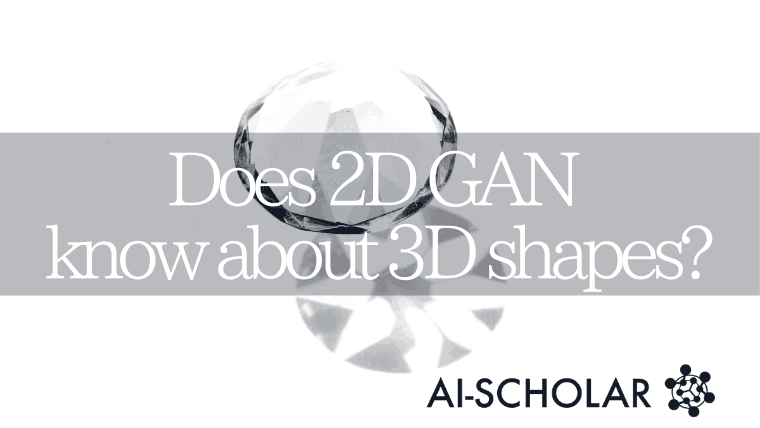 Generative Adversarial Networks (GANs) have shown very good performance in image generation and other applications, and have successfully generated a wide variety of data. In the paper presented in this article, we show that GANs trained with 2D images can also implicitly capture 3D information.

In other words, we have demonstrated that it is possible to recover the 3D shape of a 2D image from a GAN trained on the 2D image. The image is shown in the following figure.

The proposed framework is able to recover (unsupervised) 3D shapes from 2D images and also perform advanced operations such as changing the viewpoint (rotation) and changing the proof. Let's take a look at it below.

The overall diagram of the proposed method is as follows 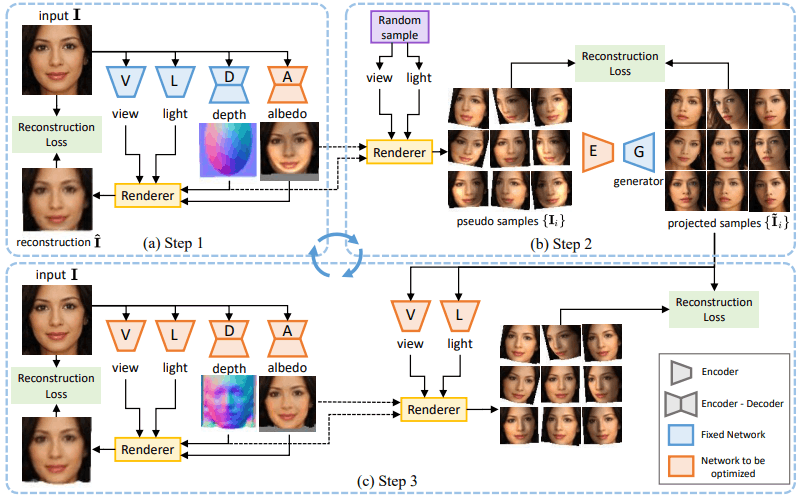 In this case, we take the image $I \in R^{3×H×W}$ as input, and use a function to predict four pieces of information consisting of the depth map $d \in R^{H×W}$ (depth information), the albedo (reflectivity) image $I \in R^{3×H×W}$, the viewpoint $v \in R^6$, and the direction of light $l \in S^2$. is used. As can be seen from the upper left (a) of the figure, this is predicted using the subnetworks ($D, A, V, L$) corresponding to the four pieces of information, respectively.

These four pieces of information are trained to recover the original input through a rendering process consisting of two steps, Lighting$\Lambda$ and Reprojection$\Pi$.

Step 1 (Figure a): Use of weak shapes

Many objects, including faces and cars, are thought to have a slightly convex shape.

We then initialize the depth map $d$, corresponding to the image $I$, in the form of an ellipse, as shown in depth in Figure (a). We use the existing scene analysis model to position the ellipse so that it roughly matches the objects in the image. 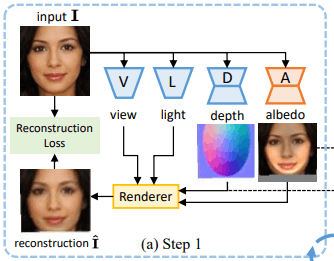 Furthermore, we initialize the viewpoint as $v_0=0$ and the light direction as from the front and train the albedo network $A$ based on the reconstruction loss.

The viewpoint $v$ and light direction $l$ is randomly sampled and rendered to obtain a pseudo-sample $\{I_i\}$. 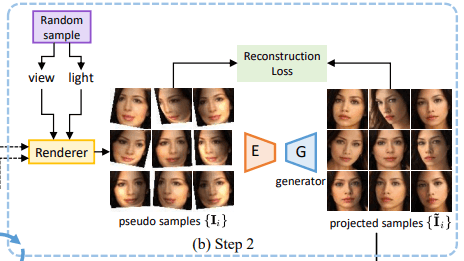 Now, we reconstruct these pseudo-samples by GAN's Generator. Specifically, we train the encoder $E$ to predict the intermediate latent vector $w_i$ for each sample (without training the generator of GAN). In this case, the optimization objective is given by the following equation

where $m$ is the number of samples, $\theta_E$ is a parameter of the encoder $E$, $\lambda$ is the regularization factor, and $L^{\prime}$ is a measure of the image distance (L1 distance in the proposed method).

The $\lambda||E(I_i)||_2$ is a regularization term, which prevents the latent offset from becoming large (far outside the intermediate latent vector distribution) (a strong regularization method is also applied in the paper).

We use the Generator of GAN, but as mentioned earlier, we do not train the Generator. Therefore, even if there are unnatural distortions or shadows in the input image (which do not exist in normal 2D images and are not usually included in the output of GAN), such distortions or shadows will not appear in the generated result of the generator (as well as in the output of normal GAN).

Therefore, it is possible to generate natural images by correcting unnatural distortions and shadows that are not included in normal 2D images, while appropriately retaining information on the viewpoint, light changes, etc. of the pseudo-sample image.

The generated result (projection sample $\tilde{I}_i$) obtained in Step 2 can be said to be a successful change of viewpoint and light direction of the original image $I$.

In this case, not only the projection sample $tilde{I}_i$ generated in Step 2, but also the original image $I$ is used as one of the samples at the same time.

In the discussion so far, we have assumed that the original image $I$ is a single image, but this can be extended to multiple images.

In the experiments, we evaluate the proposed method for 3D shape restoration and then apply it to 3D image manipulation such as viewpoint change.

The dataset used was as follows

The GAN used within the proposed method is StyleGAN2, which has been pre-trained on the previously mentioned dataset.

The qualitative results of the proposed method and previous studies in Unsup3d are shown in the following figures. 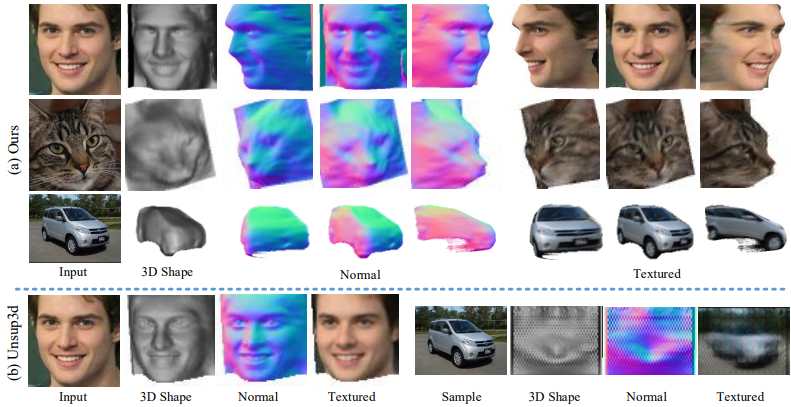 As you can see in the figure, the 3D shapes of human faces, cats, cars, and buildings can be restored with high quality. The Unsup3d method also shows some good results, but it tends to perform poorly, especially for asymmetric objects such as cars and buildings.

For quantitative evaluation, we use the BFM dataset. Here, following previous studies, we use SIDE (scale-invariant depth error) and MAD (mean angle deviation) as indices for evaluation. The results are as follows.

Furthermore, the proposed method used an ellipse to initialize the shape (depth map), but the comparison results when initialized with different settings are shown below.

Without going into details, we can see that the effect of the shape initialization setting on the performance is small. However, in the case of flat geometry (Flat), the performance is significantly worse, so it is necessary to initialize the 3D geometry to at least be able to capture changes in the viewpoint and light direction.

Rotation and Relighting of the object

After the training is completed, the proposed method can perform three-dimensional image manipulation by changing the viewpoint $v$ and light direction $l$ and rendering (or via encoder $E$ and GAN Generator$G$).

In the following figure, we show the result when the object is rotated and re-illuminated.

Rotation(Relighting)-3D shows the case of rendering (from the restored 3D shape and albedo image), and Rotation(Relighting)-GAN shows the result of image generation via encoder-GAN. The rendered result faithfully reflects the structure of the object, and the GAN generates a very natural and realistic image, indicating that both are working effectively.

We compare the proposed method with unsupervised methods (HoloGAN, GANSpace, and SeFa) that can perform face rotation using GAN.

As shown in the table, we can see that the loss is very small compared to the existing methods, and the face identity is effectively preserved. In addition, an actual generation example is shown below.

In the existing method, the face changes significantly due to rotation (e.g., the gender changes in the right of GANSpace), whereas the proposed method (Ours) can recognize the same person.

Although the proposed method worked very well, there were some cases where the 3D shape could not be recovered accurately, as shown in the following figure.

This can be attributed to the fact that the initialization of the shape of the proposed method is a simple convex shape. In addition, since the 3D shape of the proposed method is parameterized by the depth map, the shape behind the object cannot be modeled. This may be solved by better parameterization such as handling the 3D mesh in some form other than the depth map, and future development is expected.

In the paper presented in this article, we proposed an innovative method for unsupervised 3D shape recovery from a GAN trained on 2D images. This not only provides an effective method for the 3D shape recovery task but also shows that GANs implicitly learn 3D information as well. GANs have been very successful in image generation, but now their potential is even more apparent.