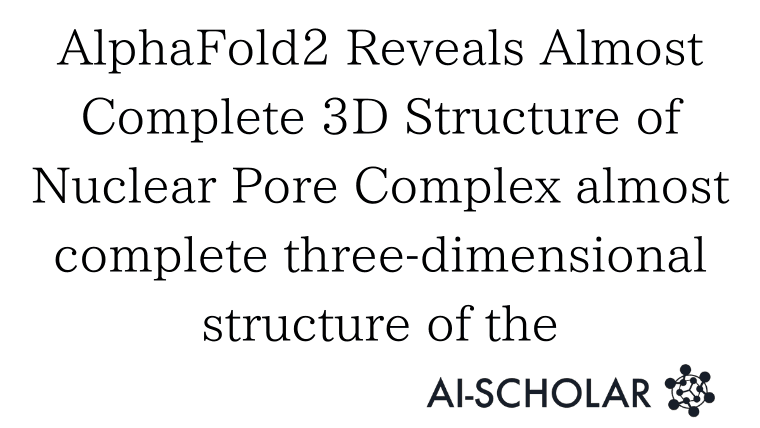 Visualize The Behavior Of Proteins! AlphaFold Reveals The Shape And Movement Of The Nuclear Membrane Pore, A Giant Protein Complex.

Nuclear pore complexes (NPCs) mediate the transport of materials in and out of the cell nucleus, and although the structure of NPCs is not well understood due to their large size and complexity (120 megadaltons), this paper presents a nearly complete structural model.

In this study, we combined AI-based structure prediction with in situ and in cellulo cryoelectron tomography to perform integrated modeling. As a result, it was revealed that the linker nucleoporin (Nups) constitutes a scaffold within and between subcomplexes to construct higher-order structures. Microsecond molecular dynamics simulations suggest that the scaffolds play a role in expanding the central pore rather than stabilizing the fusion of the inner and outer nuclear membranes. This study demonstrates that the integration of AI-based modeling and structural biology can be used to understand intracellular structures.

The above figure is taken from " In situ structural analysis of the human nuclear pore complex " (von Appen et.al , 2015 ).

The nuclear pore complex (NPC) is essential for the transport between the nucleus and the cytoplasm, and also plays an important role in the intracellular activities of eukaryotes. However, NPC is a large and complex protein complex of about 120 MDa, making it extremely difficult to study.

The NPC consists of two outer rings, the cytoplasmic ring (CR) and the nuclear ring (NR), and an inner ring. Each ring consists of eight spokes surrounding a 40-50 µm wide transport channel.

The human NPC contains about 1,000 copies of about 30 different nucleoporins (Nups), which are divided into subcomplexes. Each subcomplex is assembled to form a higher-order structure, which is achieved by a flexible protein called the Nup linker.

Current structural models are inherently flawed in that they do not include all Nups and use homology to determine structure. In addition, the complexity of NPCs in non-human organisms is greatly reduced, making them inapplicable to human studies.

In this paper, we combined cryo-electron tomography (cryo-ET) and AI-based structure prediction using isolated nuclear envelopes (NEs) and in situ human NPCs. As a result, we succeeded in estimating the 3D structure of the human NPC scaffold with unprecedented accuracy. Furthermore, the AI-based model was demonstrated to be consistent with X-ray crystallography, cryo-electron microscopy, and complementary data for an unpublished protein.

*Translator's note. The Materials and Method section is not included in the manuscript. For preprint, the part of "see Method" is marked with "Error! Reference source not found.

A near-complete model of the human NPC scaffold

The completeness of previously published human NPC structural models has been limited by the resolution of electron tomography and the unknown structure of Nups. In this study, we purified nuclear membranes from HeLa cells and performed cryo-ET analysis to generate a data set. Cryo-ET maps were also obtained from cells thinned by cryo-focused ion beam (cyro-FIB) and used as a data set.

To model the human Nups structure, we used AlphaFold and RoseTTAfold, and found that most of the Nups could be modeled with high confidence. We further validated the accuracy of our model by comparing it with unpublished X-ray crystallographic results of Nups.

The authors attempted to model Nups using ColabFold (AlphaFold available on Google Colab). The results were found to be consistent with published and unpublished X-ray crystallography.

From the above, the authors succeeded in constructing an almost complete model of human NPCs from cryo-ET images and AI-based structural models. They have also succeeded in modeling NPCs in contracted and expanded states by applying a program called Assembline to the predicted Nups structure.

The structure of the NPCs revealed is shown below.

This modeling also revealed that Nup93 bridges to the Y complex in both the CR (cytoplasmic ring) and NR (nuclear ring), which was previously unknown. We also found that there are other structures in the nuclear pore that are optimal for mRNA transport.

Linker Nups help in the spatial organization of higher-order structures

It has been very difficult to follow the 3D trajectory of the movement of soft proteins (which take on a myriad of structures) and the associated movement of materials. The authors have also succeeded in approximating the trajectory of linker Nups by coarse- or fine-graining the structures revealed by the model in this paper.

We found that the linker region of Nups35 acts as a bridge between the spokes of the IR (inner ring). This Nups35 bridge was found to be the only geometric arrangement that can be taken in both the contracted and expanded states of the NPC, suggesting that Nups35 functions as an organizer that allows the IR to build up horizontally along the membrane surface. 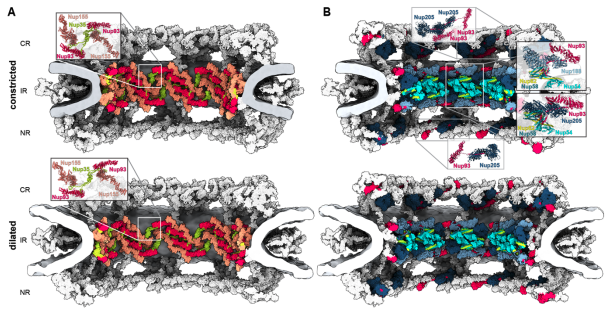 The above figure shows the connectivity of protein linkers in human NPC.

Three transmembrane Nups were known in human NPCs, but their exact locations were unknown. Again, by AI-based modeling and fitting to EM maps, their locations were clearly identified. 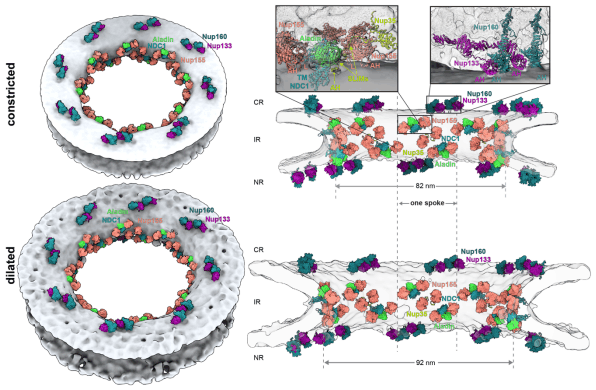 As shown in the figure above, membrane-bound motifs in human NPCs are distributed throughout the scaffold; Aladin and NDC1 form a transmembrane hub together with Nup155. 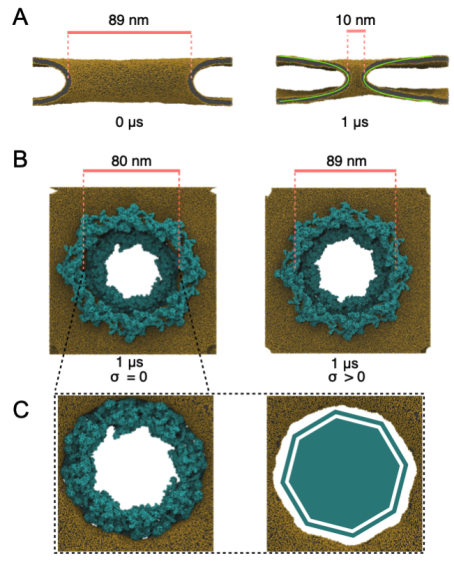 The authors have succeeded in constructing a nearly complete model of two human NPCs, one in a contracted state at the purified nuclear membrane and the other in an expanded state in the cell. This model has revealed multiple previously unknown domains, proteins, and functions of Nups.

The model will provide a basis for further studies of NPC dynamics and function, allowing quantitative and predictive statements to be made on issues such as how NPCs interact with the nuclear membrane and how they respond to mechanical stimuli.