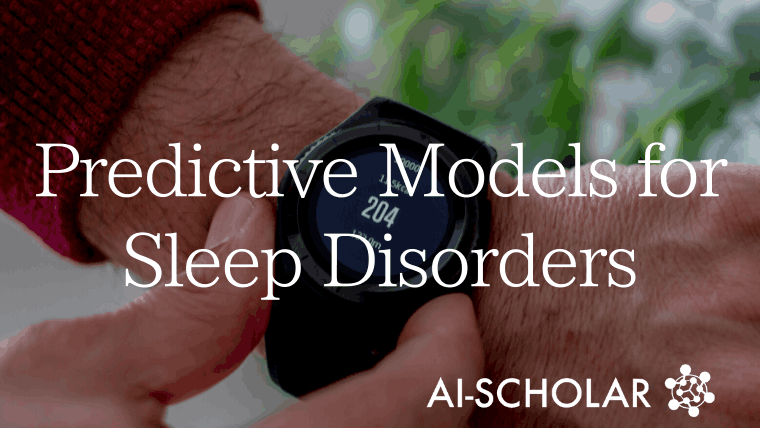 3 main points
✔️ Home sleep monitoring, especially using photoplethysmography (PPG)-photoplethysmography with a wearable device worn on the wrist, for screening for sleep disorders and health monitoring The technique has been attracting much attention
✔️ In this study, we aim to build a learning model for sleep stage classification from a large dataset of sleep-related data.
✔️ Evaluation results showed that the learning model performed better than the baseline model of PPG and ECG - an estimation model that utilized only ECG data or only PPG data

In this study, we aim to construct a learning model for classifying sleep states based on wearable devices, to improve sleep disorders.

In this study, we aim to construct a sleep state classification model based on ECG data, trained using a time series analysis model, and introducing transfer learning based on sleep scoring indices: we use LSTM as the time series analysis model, train on a large ECG data set, and transfer learn on a small PPG We will also compare and validate our model with the base model based on these data.

First, a brief description of wearable devices, which are the subject of this study's analysis, is given.

Wearable device is a generic term for information devices that subjects actually wear and use. Wearable means wearable or wearable, and there are wristband/wristwatch-type, eyeglass-type, and other types. Since these devices can actually be worn, they can be used in many aspects of daily life, from exercising to bathing and sleeping - they are thought to be effective in recording exercise such as jogging and swimming, and in acquiring health information by capturing heartbeat, pulse, sleep time, etc. It is thought to be effective in obtaining health information by capturing exercise records such as jogging and swimming, heart rate, pulse, and sleeping time.

In this section, we give an overview of the proposed method in this study.

Two datasets were used in the evaluation: first, a large dataset of 292 participants with sleep scoring from ECG and PSG signals; second, a dataset of 60 participants with annotations based on PSG, PPG and AASM We perform transfer learning on this data set. In the proposed model, time series analysis based on LSTM-Long short-term memory-is used as a deep learning model for time series analysis. 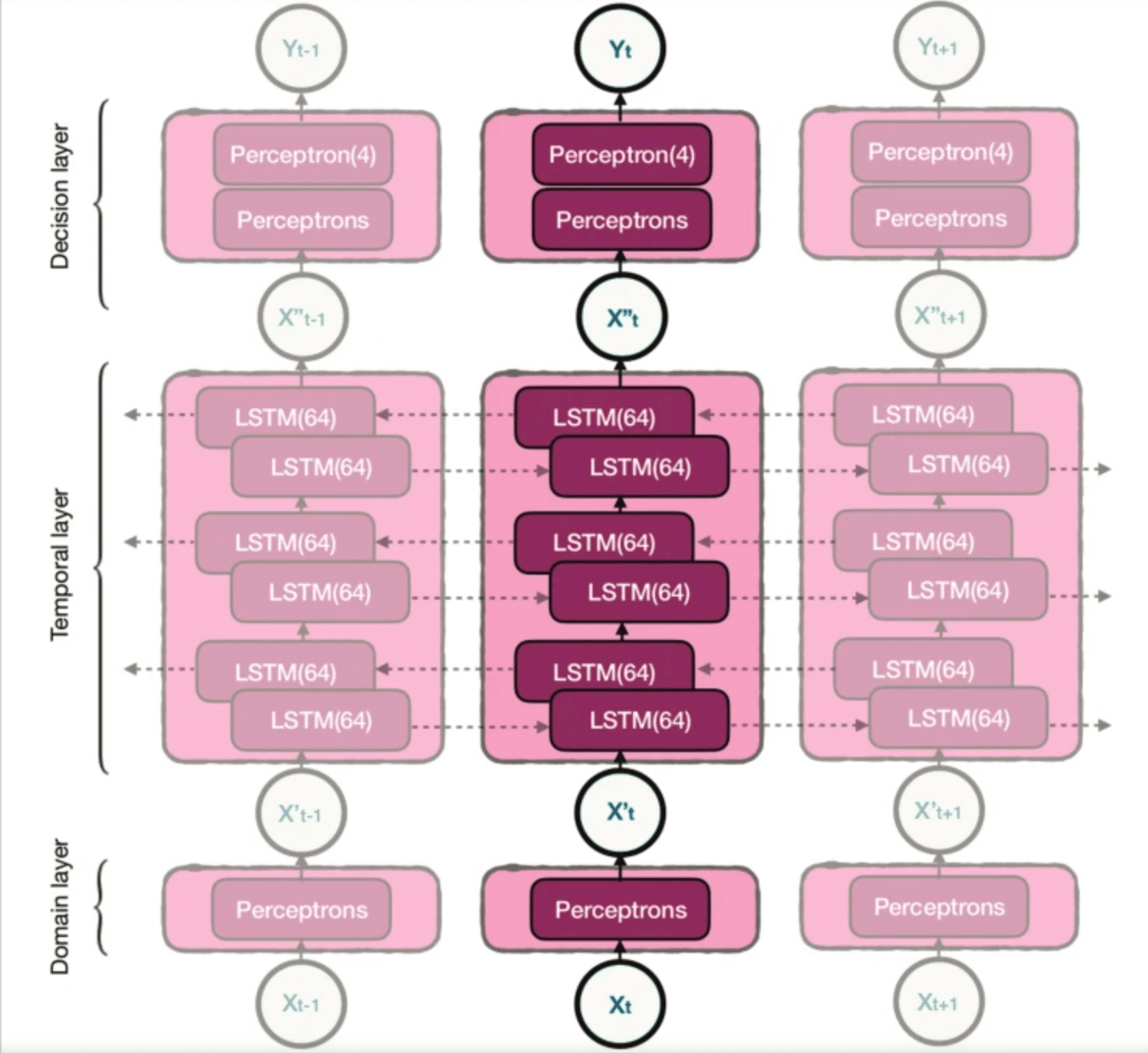 The components of this model are: domain layer; Temporal layer; decision layer. The domain layer consists of a perceptron, which is used for weighting and selecting inputs and for compact coupling in the representation. This layer holds 32 vectors for each time step. This vector is generated at every time step - in the domain layer, the vector {𝑋'1, ..., 𝑋'𝑛} with |𝑋'|=32 vectors {𝑋'1, . , 𝑋'𝑛} sequences are generated; the Temporal layer consists of an LSTM stack - in this stack, the sequence {𝑋'1,... ,𝑋'𝑛} is taken and 128 features are generated at each time step. The decision layer consists of two levels of perceptrons: the first level performs dimensionality reduction on the output of the Tempral layer - reducing a vector of size 128 to size 32 The final layer generates four softmax outputs: the outputs are set to sum to 1 at each time step - these are generated at each time step, resulting in sleep stage probabilities corresponding to all epochs. probabilities are output. In order to suppress overlearning, dropout was applied in each training session. The categorical cross-entropy was used as the loss function in the proposed model.

In the transfer learning, the Temporal layer in the proposed model is introduced as a target of the transfer learning: this layer accounts for most of the model weights - 96.6% - and is likely to be difficult to train on a small data set. Therefore, by treating it as a transfer learning target, it can be trained well on smaller data sets; the domain and decision layers, on the other hand, are re-trained after transfer learning: the domain layer adjusts the input to adapt the ECG model, and the decision layer trains the mapping between the input and the mapping between inputs and labels. In these processes, the layers of the source model are frozen and trained and validated by four-fold cross-validation. In these three transfer learning models - domain model, decision model, and composite model - a name is defined by the layer to be trained.

In this section, we describe our evaluation of the proposed model.

The performance of the proposed method in the two base models - ECG and PPG base models - against which it is compared is described below: for ECG, the Kappa coefficient - the degree of agreement between the multiple evaluation models for the same subject - is 0.62 and the estimation accuracy is 74.83%; for PPG, the kappa is 0.57 and the accuracy is 71.88 - see the table below. 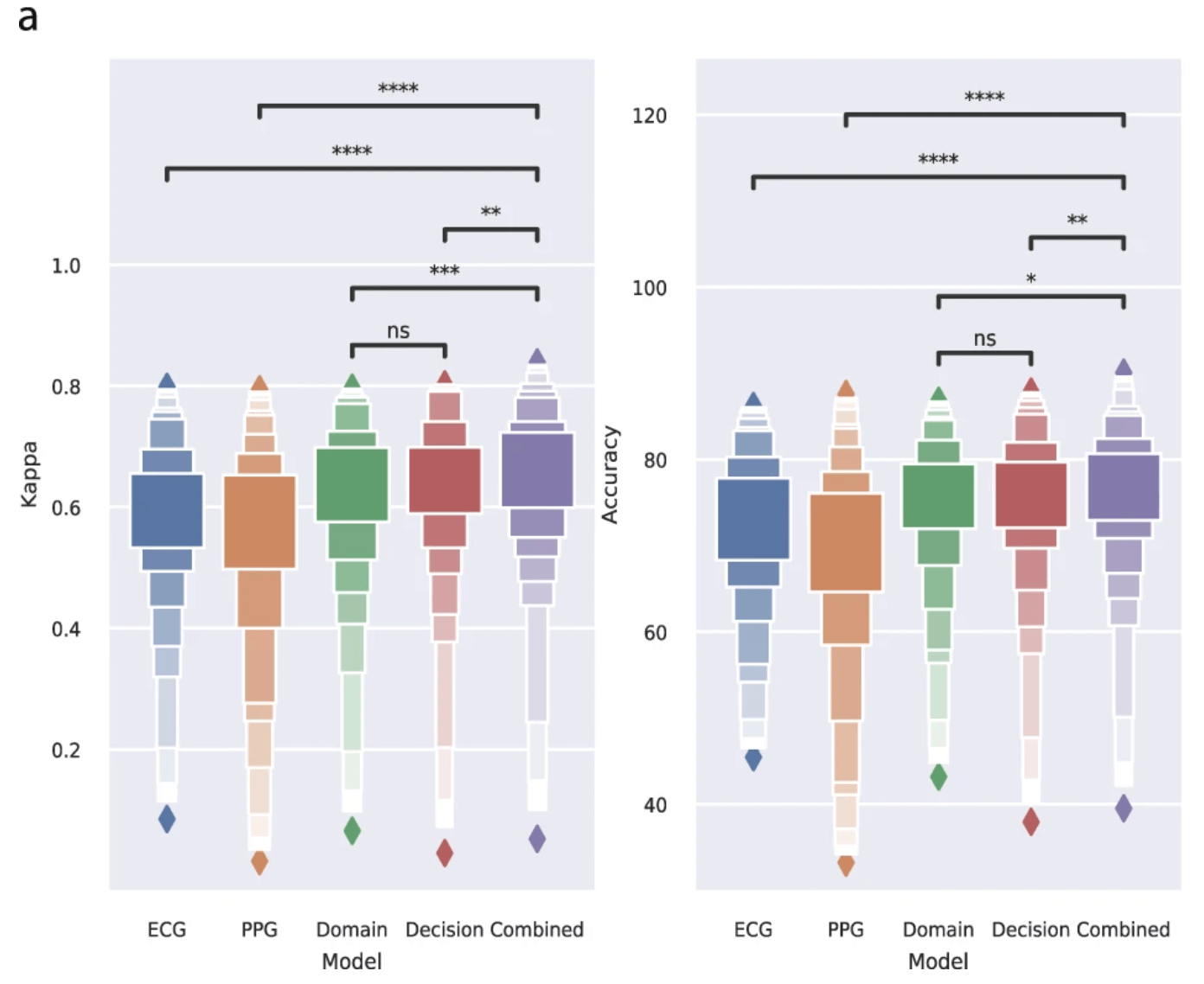 The performance of the combined approach was also compared based on F1 scores by sleep stage - see figure below. 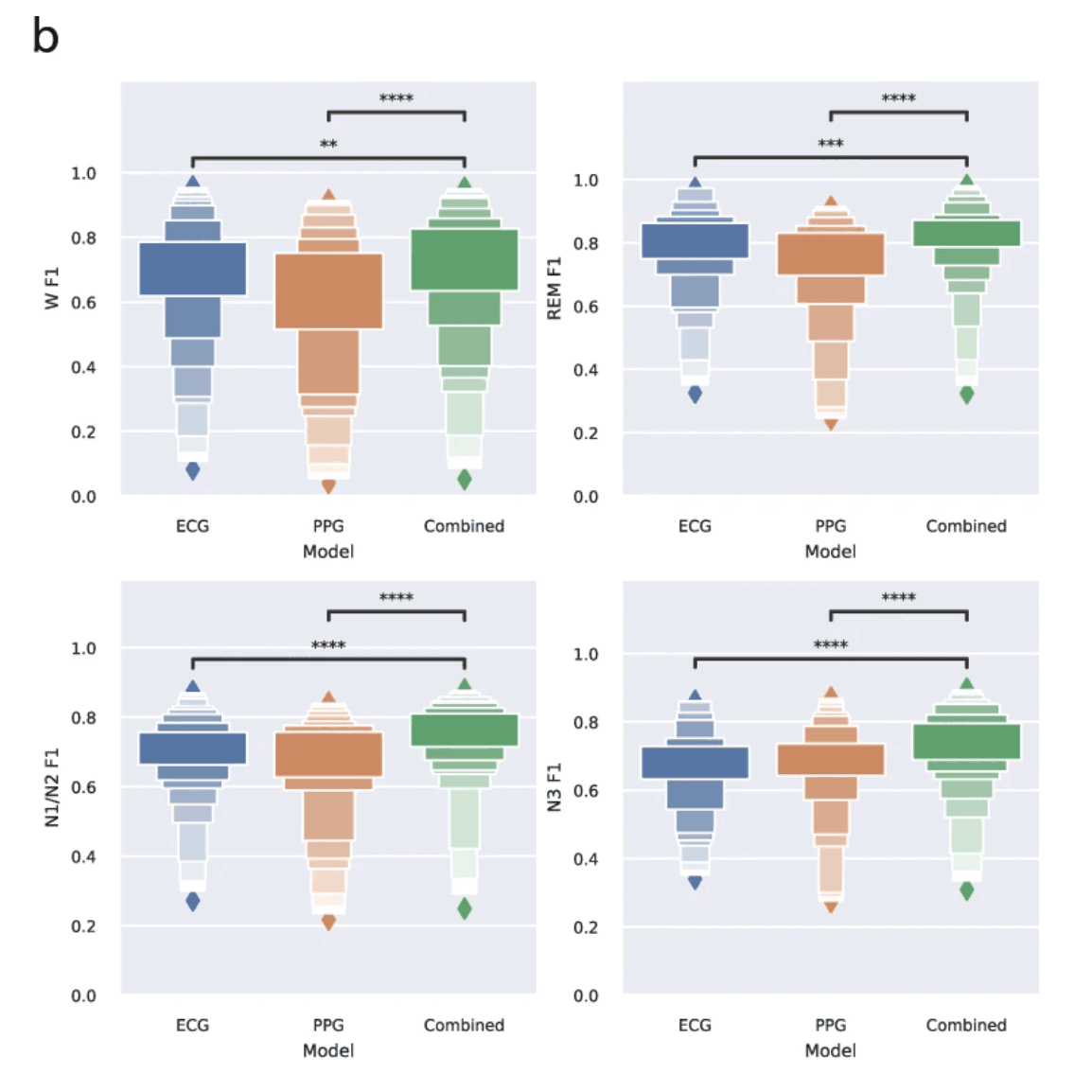 On the other hand, challenges include: classification by sleep stage; assessment of sleep apnea; and assessment of non-health status. In the present study, we set up a 4-level classification assessment instead of the usual 5-level sleep stage: the reason is that inter-rater agreement is worst in N1 - the transitional period from wakefulness to sleep - in PSG-based assessments, and rater bias occurs. On the other hand, there are also reported cases of sleep disorders in falling asleep, so there may be cases in which these classifications are inappropriate; therefore, it is necessary to clarify the evaluation performance of the five-level classification in the proposed model. In addition, it is necessary to clarify the evaluation of sleep apnea syndrome, which is one of the most common sleep disorders. Sleep-disordered breathing has been shown to disrupt sleep architecture and is associated with various lifestyle-related diseases - i.e., angina pectoris and myocardial infarction; therefore, the sleep apnea syndrome, as measured by the apnea-hypopnea index - AHI Therefore, it is necessary to clarify the performance of algorithms for severity classification of sleep apnea as measured by the apnea-hypopnea index (AHI). In addition, the fact that the subjects analyzed in this study are healthy and do not have sleep disorders is also a possible issue: the proposed model's estimation performance for people with sleep disorders is unclear. Therefore, it is possible that the performance of the proposed model may be poor for such a case sample, and it is inferred that it is necessary to build a more robust model performance. 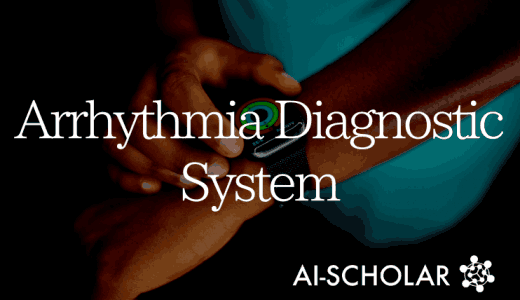