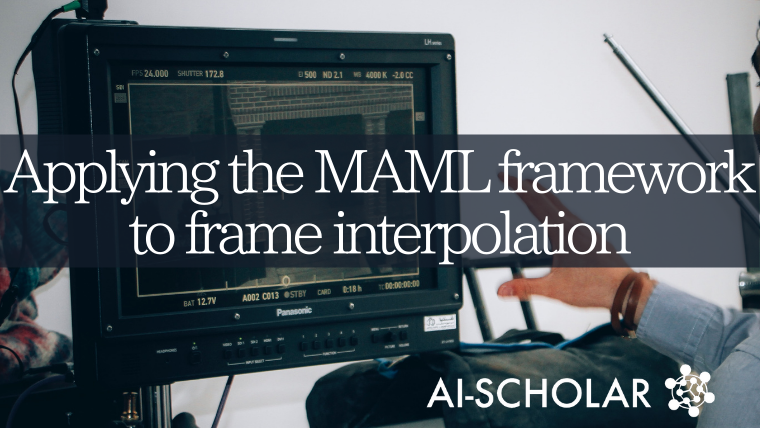 However, existing highly accurate frame interpolation models are very large and require additional computation time when training new task data. In addition, fine-tuning and other methods to solve this problem have not been studied much.

MAML (Model-Agnostic Meta-Learning ) is a model-independent meta-learning technique. Specifically, MAML is a parameter update technique consisting of an inner loop and an outer loop to make the model adapt to new tasks. After that, the actual parameter update is performed by the Outer loop.

Suppose a model is $f_\theta$ ($\theta$ is a learning parameter), and $T_{i}$ is a new task for learning. Let $\alpha$ be the learning rate. Then Inner Loop is calculated for each task by the following equation for each task and derives $\theta'_{i}$ by updating parameters for the gradient of each task. This can be done not only by updating once but also by updating an arbitrary number of times.

Then, in the Outer loop, the gradient of each task is summarized and updated in the outer loop for the model that has been updated an arbitrary number of times in the Inner loop. If $\beta$ is the learning rate of the Outer loop, it is defined as below.

For the loss, we take the loss updated for each task in the inner loop, but the update itself uses $\theta$ before the inner loop update, not $\theta'_i$. This is the basic idea of MAML, but please refer to the MAML paper for the mathematical details. The MAML described above suggests that it can be applied to various tasks independent of the model.

In the SAVFI paper, we apply the MAML framework to frame interpolation. The concrete framework is shown in the figure above. The video of the new task is defined as $T_i$. The frame counties to be sampled from each video are defined as $D_{T_{i}}I$ and $D'_{T_{i}}I$, respectively. The former is the data for updating the Inner Loop, and the latter is the data for updating the Outer Loop. In the original paper, the difference from conventional MAML is shown as follows.

Note that, the biggest difference from our algorithm from the original MAML is that the distributions for the taskwise training and test set, $D_{T_{i}}$ and $D_{T_{i}}$, are not the same. Namely, $D_{T_{i}}$ have a broader spectrum of motion and includes $D_{T_{i}}$ , since the time gap between the frame triplets are twice as large.

In other words, the handling of data with different frame intervals in the Inner Loop and Outer Loop is an unexplored area.

The following figure shows the pseudo-code written based on the above two internal and external losses. You can see that the above losses are applied to the MAML framework, and the parameters are updated. 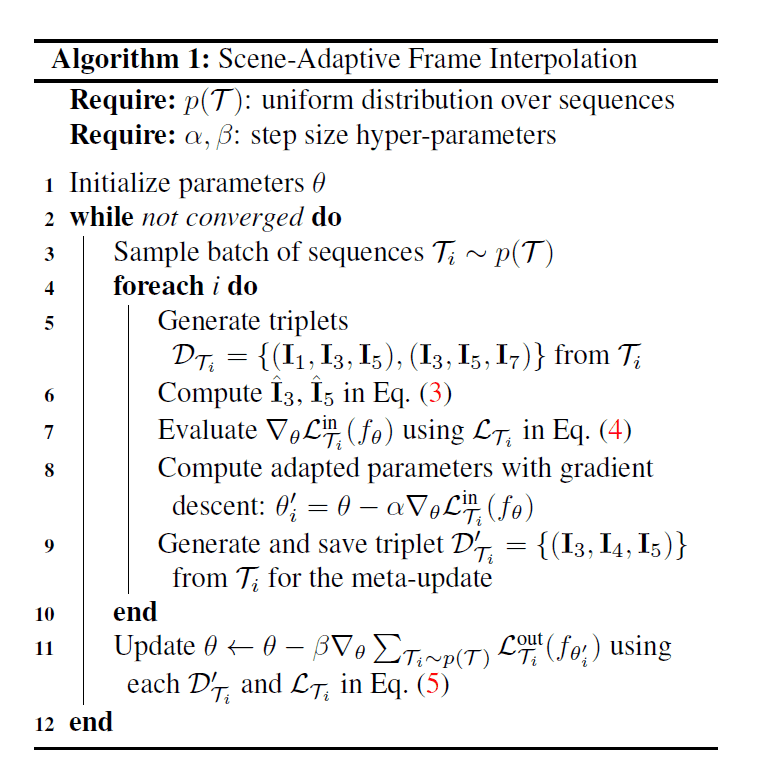 In this paper, the experiments of meta-learning are performed on four models, DVF, SuperSloMo, SepConv, and DAIN, as baselines. As the training data for meta-learning, a train-split of VimeoSeptuplet is used. For the evaluation, the test-split of VimeoSeptuplet and Middlebury-others, HD are used. In addition, the model with the arbitrary number of interpolations like SuperSLoMo is also tested with one interpolation in order to put it into the framework. Specifically, the following three experiments are conducted.

The score in the table is the PSNR between the images, and higher values generally mean that the images are closer together. Re-train is simply the result of finetuning using VimeoSeptuplet's train-split. Looking at the bolded area, we can see that the performance of each model is improved against the test-split of VimeoSeptuplet. It can also be confirmed that Meta-learning is effective for most of the models on the other datasets.

Qualitative results of frame interpolation for each data set 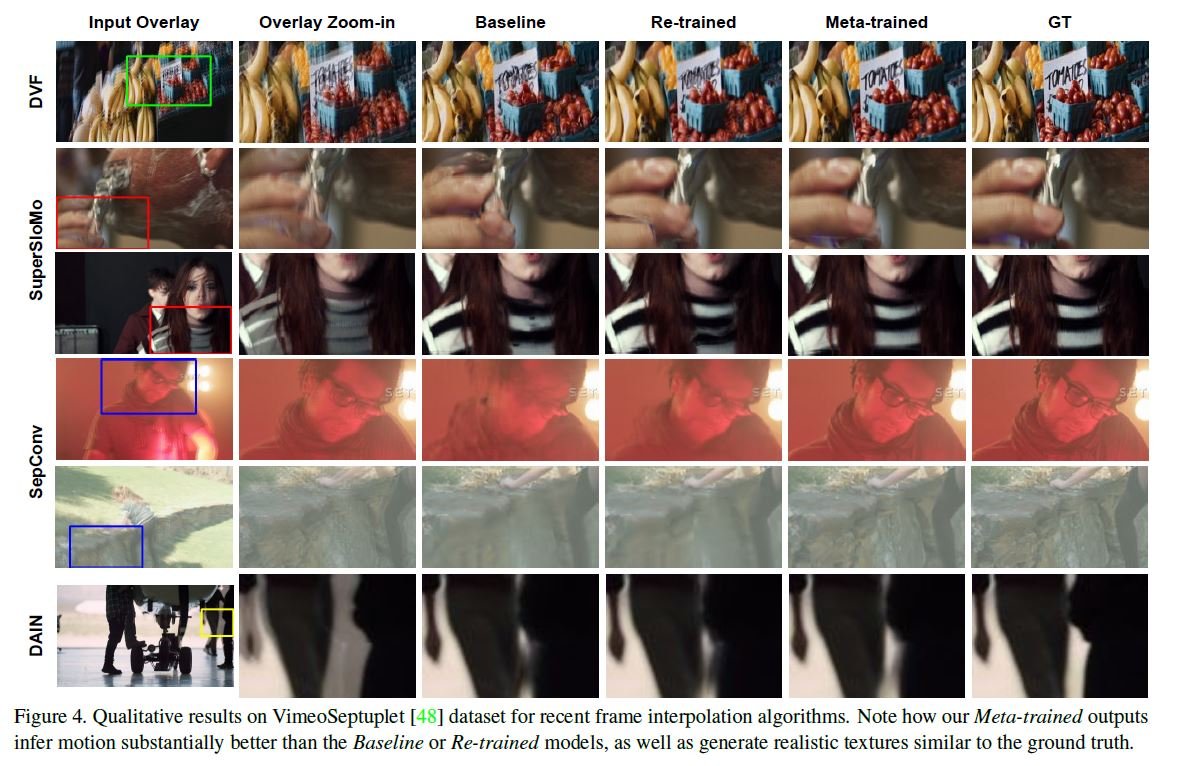 The qualitative results are shown in the figure below. The interpolation result of each row of the interpolated image by Meta-learning is clearer and closer to Ground Truth than the other rows. Especially, SepConv is remarkable, and it can be confirmed that the blur is reduced. For more information about SepConv, please refer to Other detailed results on the HD dataset The results also show that It can be confirmed that the sharpness of the interpolated image is improved. The reason for this is that in the paper SepConv's This may be due to the fact that SepConv does not have an optical flow warp transformation mechanism.

Ablation results for gradient update and learning rate of InnerLoop.

This is the result when the learning rate of Innerloop is changed. We can confirm that the best accuracy is obtained by heuristically adjusting the learning rate to the optimal value, which is neither too high nor too low, just like the number of updates above. 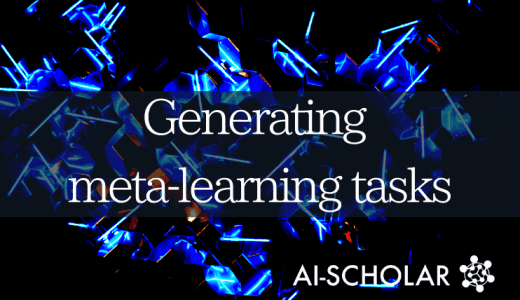