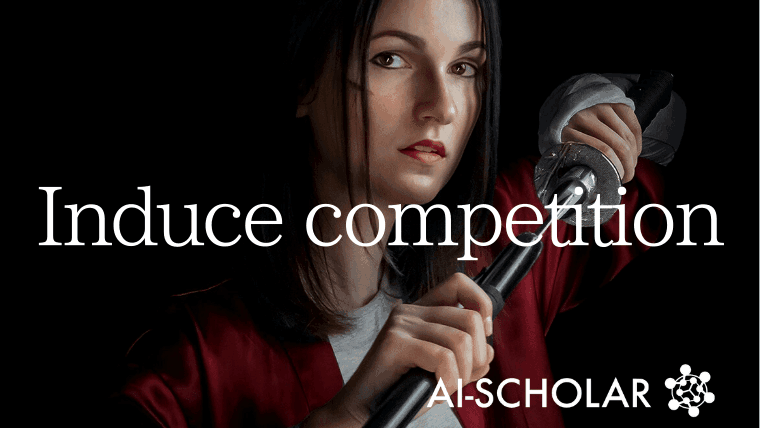 Introduction: independent structures that exist in the world

Physical processes can be thought of as being produced by a combination of subsystems with a simple modular structure. For example, two balls can be modeled as almost independent mechanisms, except that they are interlocked by gravity but occasionally collide and interact strongly with each other.

The proposed method in the introductory paper, named Recurrent Independent Mechanisms (RIMs), tries to realize a modular structure with independent mechanisms that humans use to recognize the natural world using a deep learning approach.

In designing RIMs, it is important for the mechanisms to be independent and to communicate sparsely. Independence between modules is a prerequisite for being able to interfere locally in causal inference and is considered a very important property. On the other hand, sparse communication between modules is to avoid dense exchange, which leads to independence where only modules relevant to the input respond. Specifically, we will discuss in detail how the architecture of RIMs should be designed, and from which angles the generalization performance of RIMs can be evaluated.

After an overview of RIMs and architectural design, the details of RIMs will be described in detail in four steps.

The individual subsystems, which divide the overall model into k parts, are designed to capture the changes in the observed series information in an iterative manner. These subsystems are called Recurrent Independent Mechanisms (RIMs), and each RIM learns from the data to have a different function.

Figure 1 shows an overall view of the RIMs. The authors designed the RIMs so that each RIM is differentiated and has its own dynamics, but occasionally interacts with other RIMs or embeddings of selected inputs. In particular, by using Attention Mechanisms, RIMs can manipulate only a few key/value variables, keeping the total number of parameters small. This differentiation and modularity not only provide computational and statistical benefits but also prevent individual RIMs from dominating the computation and encourages the decomposition of the computation into simple elements that can be easily recombined and reused.

We expect that the RIMs architecture will allow us to learn more robust systems than learning one large homogeneous system. This requires various properties of RIMs, such as that they should maintain their own functionality even when other RIMs change, which are detailed in Appendix A of the paper. 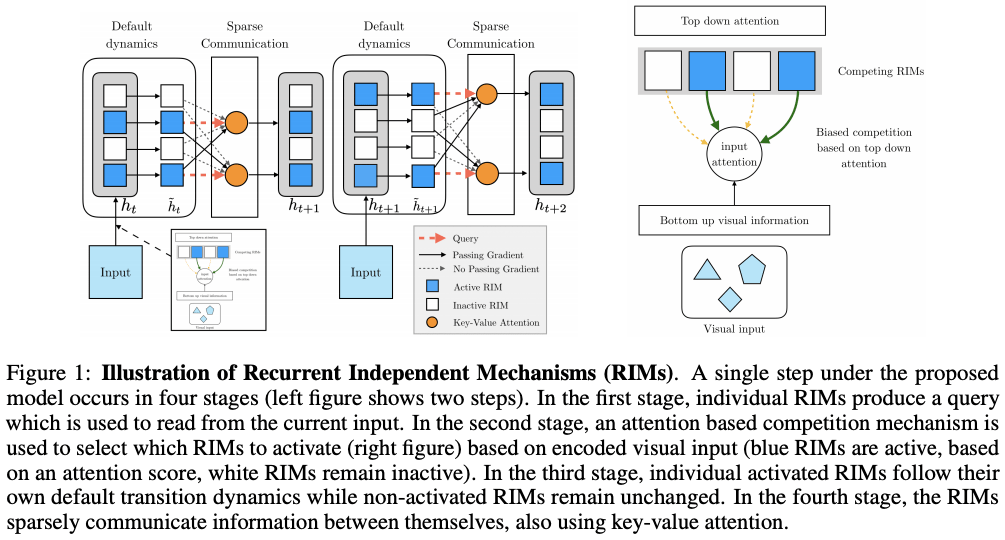 Each RIM should be excited and updated only when it receives input relevant to itself in the first stage of receiving input. At each time, each of the k RIMs computes its relevance to the input using the Attention mechanism and competes for resources. If the hypothesis introduced in the Introduction that the data is governed by independent physical phenomena is correct, then the RIMs are said to be able to learn the independent mechanism naturally (Parascandolo et al. 2018).

# When the input and output of each RIMs are multiple objects, the RIMs can dynamically select the objects to be input through Soft-Attention calculation to the Key(K) and Value(V) of the input using its own Query(Q).

The proposed method learns to dynamically select RIMs that are related to the input by the fact that the RIMs to be activated are determined by the result of the interaction between the RIMs and the input at the current time. At each time, we choose the top k RIMs of the Score obtained by the Attention mechanism described in Section 2.1. That is, at each time, only the k RIMs with a higher Attention Score than the other RIMs can be read from the input, and only the selected RIMs can be updated.

The process of selecting the RIMs to be activated in the Top-Down form to access the input from these RIMs is shown on the right of Figure 1. As shown in Equation (2), the Key and Value in the Soft-Attention calculation are obtained by linearly transforming the input X by the matrix W, respectively. The query is also calculated by each RIMs using its own transformation matrix W. These matrices W are parameters of the RIMs, and each RIM has its own W to calculate the Query.

In addition, not only the input X of the series information can be easily processed at time t, but also the input with a spatial structure such as images can be used to select the RIMs to be activated by the same procedure if the output of an embedding network such as CNN is treated as X.

Here we consider independent dynamics with no information flow between RIMs. There are several possible formats, but the authors adopt the GRU (LSTM) architecture. As shown in the following equation, the state of the kth RIM at time t is denoted as the latent state h_(t,k), and the input is A_k obtained from the Attention calculation described in Section 2.2. Also, since St is a set of activated RIMs, only the activated RIMs update through their own GRU (LSTM).

Basically, RIMs are learning with their own parameters, but RIMs that are activated using the Attention mechanism are provided with a chance to acquire information from other RIMs. The reason for this is that even if the inactive RIMs are not directly related to the input, they may contain information that is useful to the activated RIMs.

As can be seen from the above equation, based on the Attention mechanism introduced in Section 2.1, we introduced a residual connection (h_(t,k)) to prevent gradient loss (latent state h_(t,k) added at the end of Soft-Attention). To achieve sparse information exchange between RIMs, we used top-k Attention as well.

First, we visualize that different RIMs are activated for different patterns of time series data; we can see in the middle part of Figure 2 that RIMs are activated in a fixed pattern when no time-series information is input. Next, we describe the copy task and the series MNIST classification task.

In the copying task, where a short string is followed by a long blank, and then the reproduction of the string is evaluated, RIMs can generalize to 50 steps of blank during training and 200 steps of blank during testing, but the comparison methods LSTM, NTM and RMC do not do well (Table 1 left). We show in additional experiments that the elements of RIMs introduced in Chapter 2 are needed to achieve this (Appendix D.1).

In the task of classifying MNIST images with pixel [0,1] sequence inputs, we train on 14x14 images and then perform evaluation experiments at different resolutions: 16x16, 19x19, and 24x24. RIMs outperforms Transformers and other leading methods in the need for long-term memory of information rather than a copying task, and it can be said that the mechanism of RIMs, which respond only to relevant parts, is robust to changes in series length caused by changes in resolution (Table 1, right).

We then evaluate the object-based generalization performance of RIMs using a task that predicts the motion of banding balls of different sizes and speeds.

Figure 3, left, shows the results of a task in which the RIMs predicted the motion of a ball up to 50 frames after being given a 15-frame movie. Even though the number of balls during training changed during testing and a part of the input was not visible, the RIMs showed lower reconstruction error than the baseline. In addition, RIMs outperformed all comparative methods even when the number of balls was changed from 1 to 6 during training and testing, indicating that RIMs have better object-based generalization performance (Figure 3, right).

Figure 4 also shows that RIMs are more robust than Baseline LSTMs to both known and unknown obstacles in the pickup task in a grid environment.