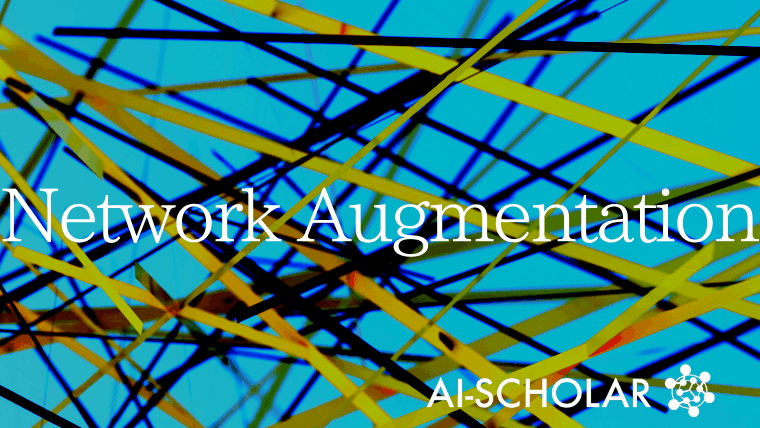 Various regularization techniques (e.g., data augmentation and dropout) have been used with much success to improve the performance of deep learning.

The results include an accuracy improvement of up to 2.2% on ImageNet for small-scale models.

First, let $W_t$ be the weights of the small (tiny) neural network that we want to train and $L$ be the loss function. During training, the weights are optimized to minimize $L$.

At this time, small neural networks tend to fall into locally optimal solutions and have poorer training and testing performance than large neural networks due to their small capacity.

This can be said to be the opposite of the dropout method, which makes predictions only on a part of the network, and creates a huge neural network by extending the width of the small neural network you want to train.

The idea can be summarized in the following diagram 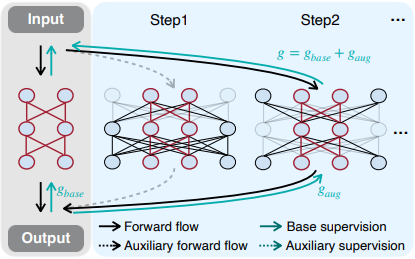 The loss function $L_{aug}$ in the network augmentation then becomes

where $[W_t, W_i]$ represents the small neural network $W_t$ that we want to train and the extended model including new weights $W_i$.

$\alpha_i$ is a hyperparameter to integrate the losses of different augmented models.

About the enhanced model

When augmenting a network, it is difficult to make the augmented model $[W_t, W_i]$ independent from the aspect of computational resources. Therefore, we construct various augmented models in the form of selecting the subnetwork of the largest model (see Step1 and Step2 in the aforementioned figure).

The idea is similar to One-Shot NAS, except that the focus is on improving the performance of a particular small neural network, rather than on obtaining the optimal subnetwork.

In addition, when the network is augmented, the augmentation is done in such a way that the width of the model is increased. 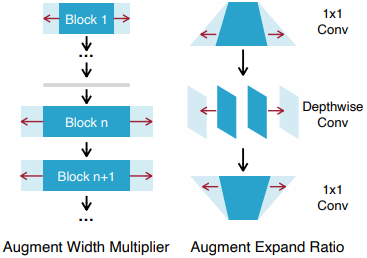 When training the augmented network, the model is updated by sampling the subnetworks at each step.

Where $[W^n_t, W^n_i]$ is the network sampled at each learning step. The $W_i$ of the augmented part is updated as well as the weights of the small neural network we want to learn.

Note that the hyperparameter $\alpha$ is fixed at 1.0 for all experiments.

Overheads in Learning and Inference

First, network augmentation is done only at training time, so there is no overhead at inference time. For learning time, our experiments show that the learning time is only 16.7% longer.

This is because network augmentation is assumed to be used for training small networks, and the data loading and communication costs dominate over the computational processing during training.

The image classification dataset and training settings used in the experiments are as follows.

The image detection dataset is also shown below.

First, the results in ImageNet are as follows.

In general, the proposed method can consistently improve the accuracy of small neural networks for different neural network architectures.

Note that network augmentation is a method that is supposed to be applied to small neural networks, so ResNet50 with sufficient model capacity will not improve the accuracy. The plot of accuracy against the number of training epochs is shown below.

As shown in the figure, the number of training epochs required to achieve the same accuracy is significantly reduced compared to the no-enhancement case.

Next, the comparison with knowledge distillation using the Assemble-ResNet50 is a supervised model is as follows.

Next, the comparison results with dropout, data augmentation, and other methods that lead to improved accuracy for large neural networks are shown below.

In general, small neural networks suffer more from underfitting than overfitting, so methods to prevent overfitting are counterproductive.

Conversely, the proposed method of network augmentation is designed to mitigate the underfitting of small neural networks, so applying it to large neural networks is counterproductive. These are shown in the following learning curves.

Finally, the following results are obtained when we perform the transition learning of the model pre-trained by ImageNet.

Compared to the baseline (Baseline(150)), better results are shown in green and worse results in red. Overall, we found that Network Augmentation performed well when learning transitions.

In this figure, we can see that we can achieve comparable performance at smaller resolutions.

In this article, we introduced Network Augmentation, a method for improving the performance of small neural networks that are prone to suffer from underfitting. The method was shown to consistently improve accuracy in tasks such as image classification and object detection.

Existing regularization methods are mainly aimed at dealing with the overfitting of large neural networks, but given that we want to use small models for edge devices, etc., it is also important to use such small neural network-specific improvement methods.