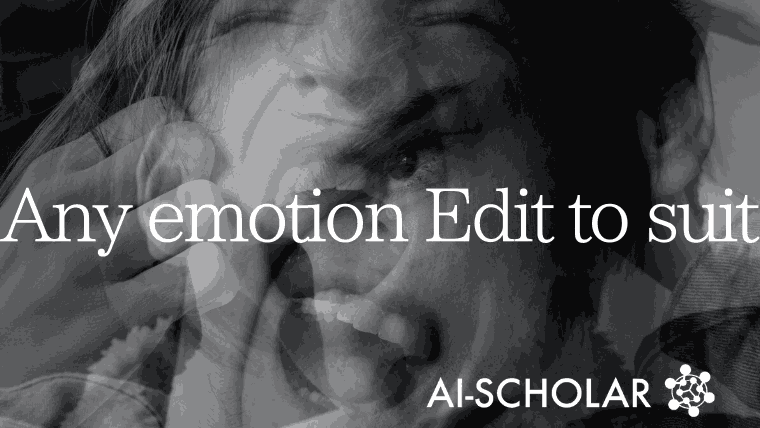 Now There's A Technique For Editing The Facial Movements Of Characters In A Video To Match Any Emotion!

A research area called audio-driven talking heads, which edits a person's face in a video to synchronize with the input audio, has been proposed in various methods because of its great need for film production and telepresence.

However, most of these previous studies have focused on the correlation between the content of speech and a person's mouth, and no method has been developed that takes into account emotion, an important feature in human facial expressions.

The following challenges were cited as the reasons for this when modeling emotional expressions by speech intonation.

As shown in the figure below, EVP consists of two main components: Cross-Reconstructed Emotion Disentanglement and Target-Adaptive Face Synthesis.

To realize emotion control by speech synthesis, it is necessary to extract information about emotion and speech content, which are inherently intertwined in a complex manner, independently from speech signals.

So, to separate this information. cross reconstruction from existing research, but since this method requires pairing audio clips of the same utterance but with different emotions of the same length, we use an audio-visual dataset of various characters speaking the same content in different emotional states, and construct two pseudo-training pairs.

Specifically, Mel Frequency Cepstral Coefficients (MFCC) is used to acquire speech information, and Dynamic Timig Warping (DTW) is used to align the length of two speech clips by stretching and shrinking the MFCC feature vector along the time dimension.

The training pairs thus created are used to train the Cross-Reconstructed Emotion Disentanglement below.

The learning procedure for Cross-Reconstructed Emotion Disentanglement is shown in the figure below. 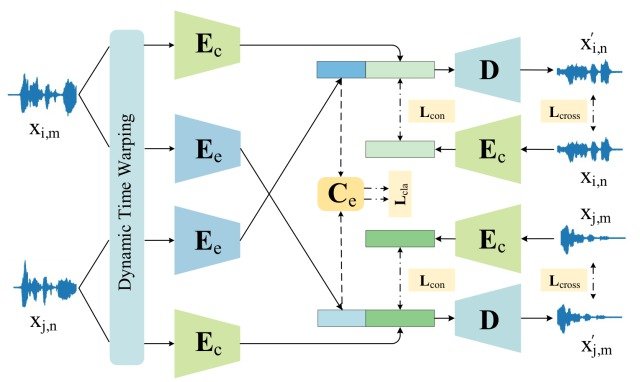 In this paper, we propose a method called Target-Adaptive Face Synthesis to bridge the gap between the facial landmarks generated by the separated audio information and the variations in the posture and motion of the characters in the video.

This method consists of the following three processes

Let's look at them one at a time.

The goal of this process is to predict the position and movement of landmarks from audio clips of the extracted emotional information, which requires that the facial shape from the aligned landmarks, i.e. the identity information of the person in the video, is not changed.

To align the head pose, we first perform landmark detection on the video using existing methods and then a parametric 3D face model to solve a nonlinear optimization problem to recover 3D parameters from 2D landmarks.

Then, from the shape and expression parameters, we obtain L3dp, the set of pose-invariant 3D landmarks, as shown in the equation below.

where m is the location of the average facial landmark, and bgeok and bexpk are the basis of the shape (geometry) and expression (expression) computed by principal component analysis of a high-quality face scan and blendshape (an animation technique).

Given the landmarks obtained from training and the target frame, the edge maps extracted from the landmarks and the frame are combined to create a guidance map.

Specifically, the edge detection algorithm Canny Edge Detection is used to detect edges in regions other than faces, the original landmark positions are replaced with landmarks obtained by training, and then adjacent facial landmarks are concatenated to create a face sketch.

This makes it possible to generate smooth, realistic frames that match the movements of the people in the video.

In this paper, we compare our method with the following three existing methods.

The generated results are shown in the figure below. 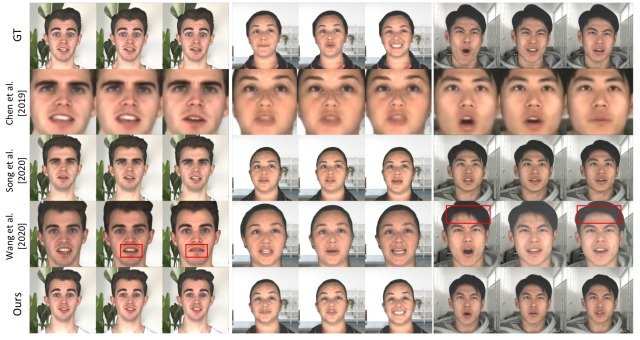 Thus, it is demonstrated that our method has a very good performance compared with the existing methods.

We applied LD and LVD in the mouth and face regions. We separately evaluated how accurately the synthesized videos represented lip movements and facial expressions, in addition to comparing the scores of SSIM, PSNR, and FID, which are evaluation metrics of existing methods.

The results are shown in the table below.

To quantify the quality of the generated video clips, we conducted a user study using our method, three existing methods, and real videos under the following conditions

The results of the 50-participant survey are shown below.

Thus, it was confirmed that our method obtained the highest scores for both the quality of the generated video and the synchronization with the audio, and it was also evaluated to have the highest accuracy for sentiment classification compared to existing methods.

As you can see in the generated video, this method produces very natural facial expressions for the "Happy" and "Angry" conditions, and we expect further progress in this research field based on this paper.

The details of the architecture of the model presented here and the generated video can be found in this paper if you are interested.