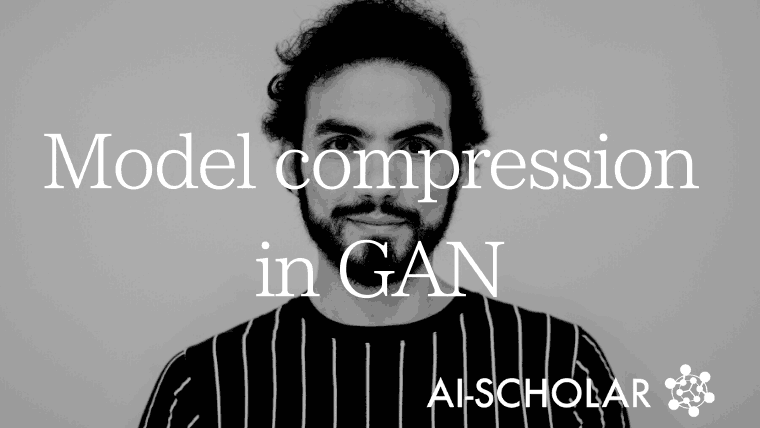 However, state-of-the-art GANs, such as StyleGAN2, face challenges in terms of computational complexity and memory cost, making it difficult to deploy them on edge devices.

However, these methods cannot be directly applied to Unconditional-GANs such as StyleGAN. In this article, we propose a model compression method specialized for Unconditional-GAN to deal with this problem. Let's take a look at it below.

The goal of the proposed method is to obtain a smaller capacity and more efficient model $G'$ for $G$, an Unconditional-GAN that generates images from random noise.

More specifically, the goal is to achieve the following two things

The following Channel Pruning and Knowledge Distillation will be conducted to achieve this goal.

Before we get into the details of Channel Pruning and Knowledge Distillation, let's consider a case where we want to compress a GAN that produces an image of a human face. In this case, the most important region of the generated image is the human face (other background regions are not important).

By using such "Content-Aware" model compression, we aim to obtain a lightweight model with the same quality as the original GAN. 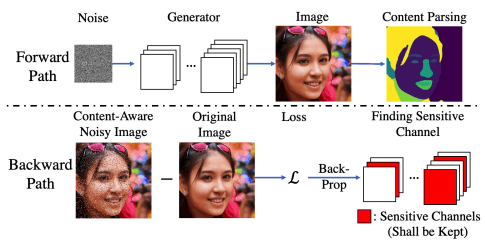 In the generation of human face images, the human face region corresponds to this.

Next, in the Backward path, we prepare an image $G_N(z)$ with random noise only on the COI, which is an important region of the generated image $G(z)$. This is the Content-Aware Noisy Image in the above figure. For example, in the face image generation, the noise is added only to the human face region in the generated image.

Then, we perform back-propagation of the differentiable loss $L_{CA}(G(z),G_N(z))$ obtained from the original image to obtain the gradient $\nabla g\in R^{n_{in}×n_{out}×h×w}$.

In the proposed method Knowledge Distillation, we use a combination of several losses. Let's look at each of them in turn.

The simplest example would be a loss defined to reduce the norm between the output or intermediate layers of the generated image $G(z), G'(z)$.

This is represented by the following equations for the output and intermediate layers, respectively

where $G_t(z),G'_t(z)$ is the activation of the middle layer ($t$th layer) and $f_t$ is the linear transformation to match the depth dimension.

Apart from the pixel-level norm between the output images, we can also use an evaluation metric that more closely resembles the human judgment of similarity.

The proposed method uses the perceptual distance between the output images by LPIPS.

As in the case of pruning, the proposed method uses a distillation loss that focuses on the important content in the image. This is shown in the following figure.

Simply put, we compute the aforementioned pixel-level and image-level Distillation loss for the image after masking non-essential content regions in the image (e.g., background regions in face image generation).

In our experiments, we performed model compression for SN-GAN trained on CIFAR-10 and StyleGAN2 trained on FFHQ. The resolution of the output image is 32px for SN-GAN and 256,1024px square for StyleGAN2.

To evaluate the performance of the generated images, we use the following five quantitative metrics

The last evaluation index for PSNR and LPIPS is shown in the following figure.

In GAN-based image editing methods (e.g., this study ), such a metric is introduced because it is important to obtain the latent vector corresponding to the real image and to be able to recover the original image from it.

About the proposed method (channel pruning)

At the outset, the results of the pruning of the proposed method and its comparison with various baselines are as follows

On the other hand, the proposed pruning method resulted in only a 0.9 reduction in FID score while keeping FLOPs to half of the original.

About the proposed method (knowledge distillation)

For the aforementioned learning goal $L=L_{GAN}+\lambda L^{norm}_{KD} + \gamma L^{per}_{KD}$ in knowledge distillation, the results of experiments with various settings of hyperparameters such as $\lambda and \gamma$ are as follows ( The trained model has 80% of the channels of the original model removed by the proposed pruning method).

In general, the best results were obtained when training was performed by $L^{norm}_{KD}$ with output only and $L^{per}_{KD}$ with LPIPS.

Furthermore, we perform a comparison experiment between the proposed method and GAN Slimming (GS), a state-of-the-art GAN compression method. The results are as follows.

In general, for both CIFAR-10/FFHQ, the proposed method (especially in the Content-Aware setting) showed better results.

The results of testing whether the models compressed by the proposed method can be used for style fusion, morphing, and GANSpace editing tasks are as follows.