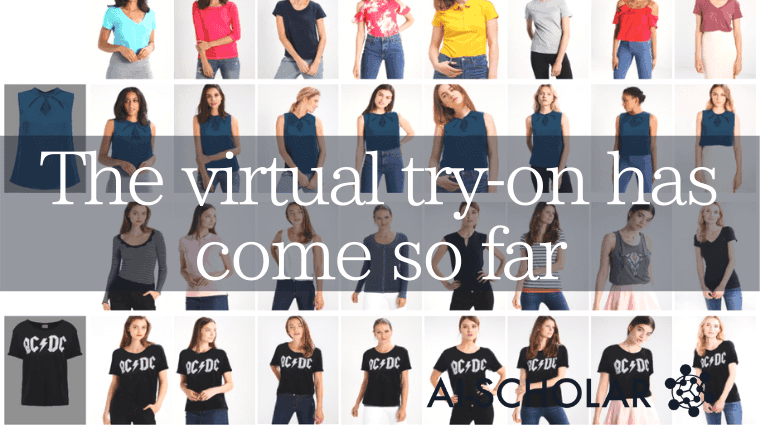 To address these challenges, a parse-free Parse Free Appearance Flow Network (PF-AFN ) is proposed in this paper.

Appearance Flow: Appearance Flow is a 2D coordinate vector that indicates which pixels in the source image can be used to composite the target. It is used for visual tracking, image restoration, and super-resolution of face images. 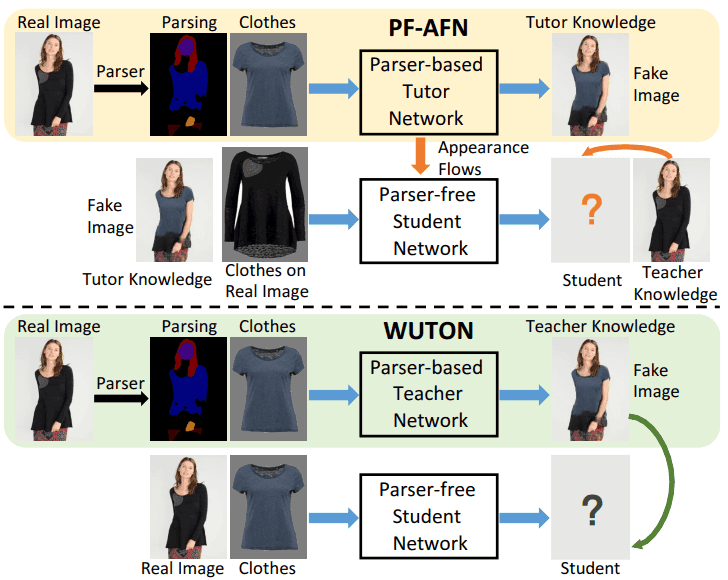 In this paper, a parser-free model, Parser Free Appearance Flow Network ( PF-AFN ), which does not require segmentation information, is proposed. Unlike conventional models such as WUTON, this is the first model to distill knowledge in a three-stage " teacher-tutor-student " structure. In the above figure, the difference between PF-AFN and WUTON is illustrated.

As can be seen from the above figure, our method includes two networks: PB-AFN, which is a parse-based network, and PF-AFN, which is a parse-free network. As a training procedure, we first train the PB-AFN on an image of a garment and a person wearing this garment, as in the existing method. We concatenate the paper, the face, the lower part of the clothes, the body segmentation results, and the pose estimation results. By concatenating this distorted clothing image with the stored parts of the human image and the pose estimation, we can train the generation module to synthesize a try-on image together with a ground-truth teacher image.

In the training phase, the parameters of both the generative model and the warping module, AFWM, are optimized by the following equation.

Besides supervised training of the parser-free student network, PF-AFN, on authentic images, this paper also distills the appearance flow between human and clothing images to help find their correlations. features extracted from PB-AFN generally capture rich semantic information, and the estimated appearance flows are likely to be more accurate and can therefore guide the PF-AFN. However, as pointed out earlier, if the parsing results are inaccurate, then the parsing-based PB-AFN will also guide the PF-AFN quite differently, making the semantic information and the estimated appearance flow quite strange. To avoid this, we introduce a completely new adjustable distillation loss in this paper. The definition is as follows.

The experiments were performed with VITON, VITON-HD, and MPV, respectively.

As can be seen from the above figure, PF-AFN achieves SoTA performance on both VITON and MPV datasets.

In this paper, we use a completely new knowledge distillation method called " teacher-tutor-student " to generate high-performance fitting images without parsing. The interesting feature of this approach is that the fake images generated by the parsing-based tutor network are treated as input to the parsing-free student network, which is then supervised by the original real images ( teacher knowledge ). In addition to using the real image as a teacher, we also distill the appearance flow between the human image and the clothing image to help find correlations. Experimental results show that AF-PFN achieves SoTA on various datasets.