How Is It Different From GAN? Are You Familiar With The Image Generation Model NeRF?

First, watch the animation below to get an idea of the "New Perspective Image Generation".

The easiest way to create the above animation is to take a series of pictures while moving the camera (just like a movie), that is, by taking a series of pictures of an object while changing the viewpoint little by little, the object appears to be viewed in three dimensions. However, in NeRF, you can only shoot from three viewpoints (front, side, and back), and you can get images from "diagonally forward" and "diagonally backward" which are "not shot" in between. This is called "novel view" image generation.

This research addresses a longstanding problem in view synthesis (view synthesis) by using neural networks to optimize the parameters of the image representation.

The authors represent a static scene as a continuous 5-dimensional function that outputs the radiance (with direction θ, φ) and density at each point (x, y, z) in space This function acts like a differential opacity that controls how much luminosity (i.e. how bright) is stored by the rays passing through each point.

In our method, we transform the five-dimensional variables (x, y, z, θ, φ) into volume density and RGB color by regression using a Multilayer perceptron (MLP) without convolutional layers MLP regression is simple and easy to use method.

To obtain the neural radiance field (NeRF), which is the output of the regression, the experiments in this study were conducted as follows.

Through these steps, the model is optimized by actually minimizing the difference between the observed image and the output result; the protocol flow is shown below.

A recent promising direction in this field is the encoding of scenes using MLP, but it has not been able to reproduce realistic scenes with complex shapes. ShapeNet is known for the representation of 3D shapes, but the difficulty of aligning teacher data in the first place has been a barrier to research. The ShapeNet is a new method for 3D shape representation.

Later, by formulating a differentiable rendering function, it became possible to optimize the 3D neural implicit shape representation using only 2D images. Niemeyer et al. considered the object surface as a 3D occupancy field, calculated the surface intersection of each ray using a numerical method, and calculated it exactly by implicit The position of the intersection of each ray was then used as input to the neural 3D texture to predict the diffuse color at that point. Using the neural 3D texture, Sitzmann et al. proposed a differentiable rendering function that outputs feature vectors and RGB colors in continuous 3D coordinates.

The authors represent the continuous scene as a five-dimensional vector-valued function, whose inputs are coordinates (x, y, z) and line of sight (θ, φ) and whose outputs are color (r, g, b) and volume density σ.

The above figure shows an overview of the scene representation and differentiable rendering using NeRF: 5-dimensional inputs (position and line of sight) are used to compose an image along the camera ray (camera ray, represented by the eye and red arrow in the figure). The five variables (x, y, z, θ, φ) are input to MLP (F_Θ), which outputs RGB color and volume density (R, G, B, σ).

The volume density σ(x) can be interpreted as the differential probability that a particle with one ray infinitesimal ends up at point x.

C(r) is the predicted color of the camera ray r(t) with proximal t_n and distal t_f. The function T(t) is the probability that the ray will travel from t_n to t_f without colliding with other particles, expressed as the cumulative transmission along the ray To render a view from a continuous NeRF (neural radiance field) the desired virtual camera must be integrated over each pixel it passes through.

F'_Θ is a multilayer perceptron.

γ is a high-frequency function expressed as above.

Similarly, C simplifies the above. 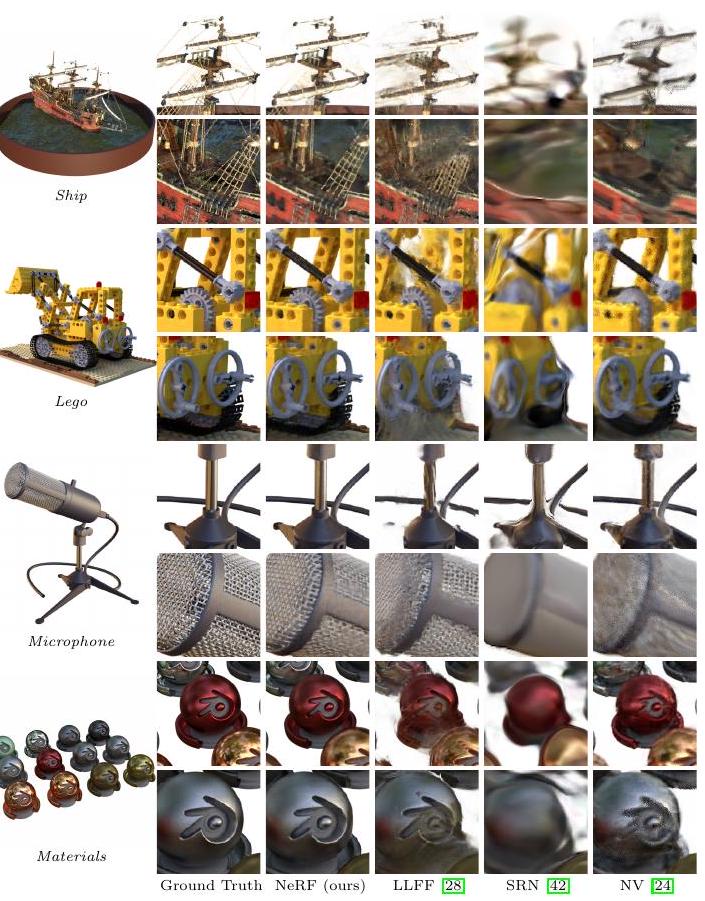 Comparison with Neural Volumes (NV), Scene Representation Networks (SRN), and Local Light Field Fusion (LLFF). All of the images are distorted and have more details when compared to NeRF.

The table above summarizes the comparison results.

Each index is a loss function, which compares the GT and the generated image from a certain point of view: PSNR and SSIM indicate that the larger the better, and LPIPS indicates that the smaller the better This shows that NeRF outperforms all existing methods.

In this work, the authors tackled the problem of existing MLPs representing objects and scenes as continuous functions and succeeded in representing the scene as a 5D Neural radiance field. This has allowed us to advance the graphics pipeline to generate new viewpoint images from real-world objects.