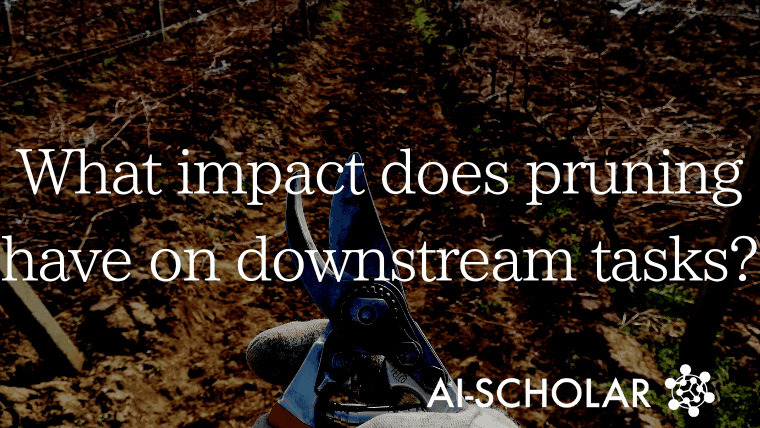 The computational cost of deep learning models is significant, and model compression techniques to mitigate this cost is a rapidly developing area.

In the paper presented in this article, we investigate how the Pruning method, which sets some of the weights to zero, works in the general transition learning setting, where a convolutional neural network (CNN) trained on ImageNet is adapted to a downstream task.

The results of this study show that the sparse model performs as well as or better than the transition learning performance of the dense model, that inference and learning can be significantly accelerated, and that the behavior of various pruning methods is different.

Our experiments investigate the transition learning performance when various model compression techniques are applied. The experimental setup is as follows.

In our experiments, we mainly use ResNet50 to analyze the transition learning of sparse models.

For all three of these, we specifically use the following techniques

The downstream tasks used for transfer learning are as follows

As noted in the table, we use the Top-1 accuracy or the average Validation accuracy per class for each task as the performance metric.

For each downstream task and model, we also compute the relative increase in error relative to the dense model baseline and the degree to which each method is faster, which we use as a performance measure.

First, we check the validation accuracy of the model sparsified by Pruning on ImageNet. The results are as follows. 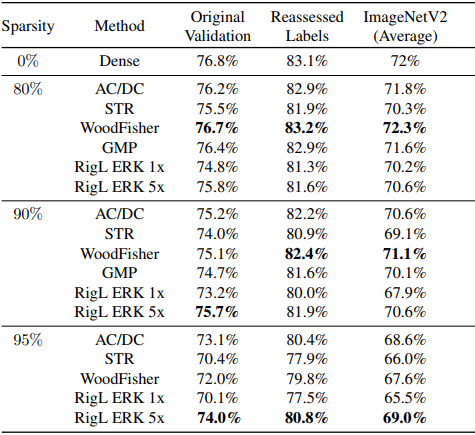 There are differences depending on the sparsity and the version of the Validation set, but in general WoodFisher and RigL ERK 5x show particularly good results.

Next, we investigate the performance of various Pruning methods when only the linear classifier is fine-tuned in the downstream task. The results are as follows. 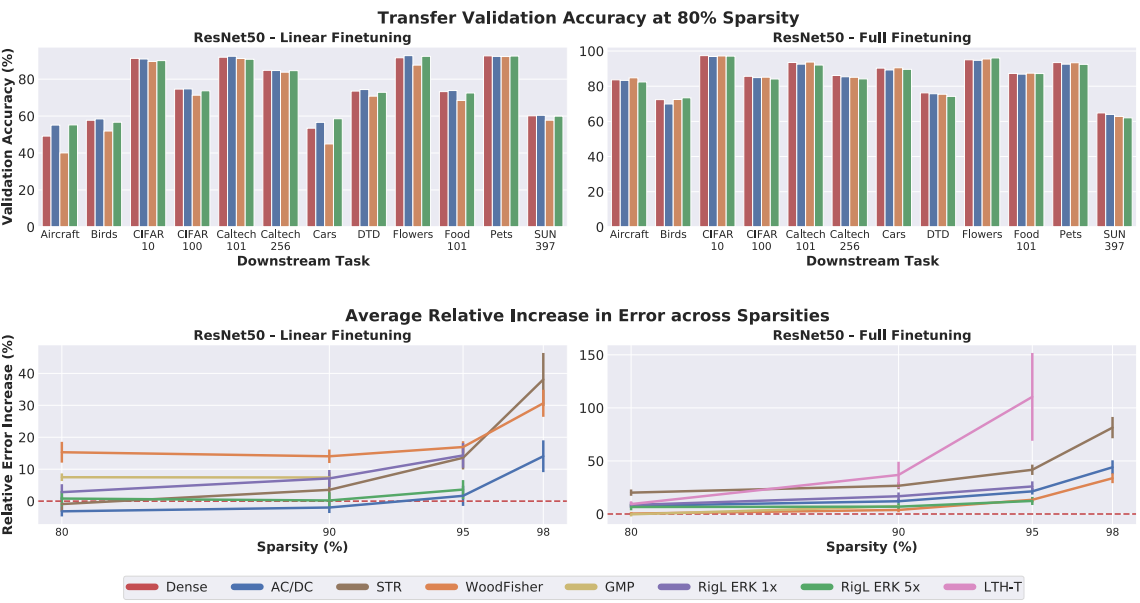 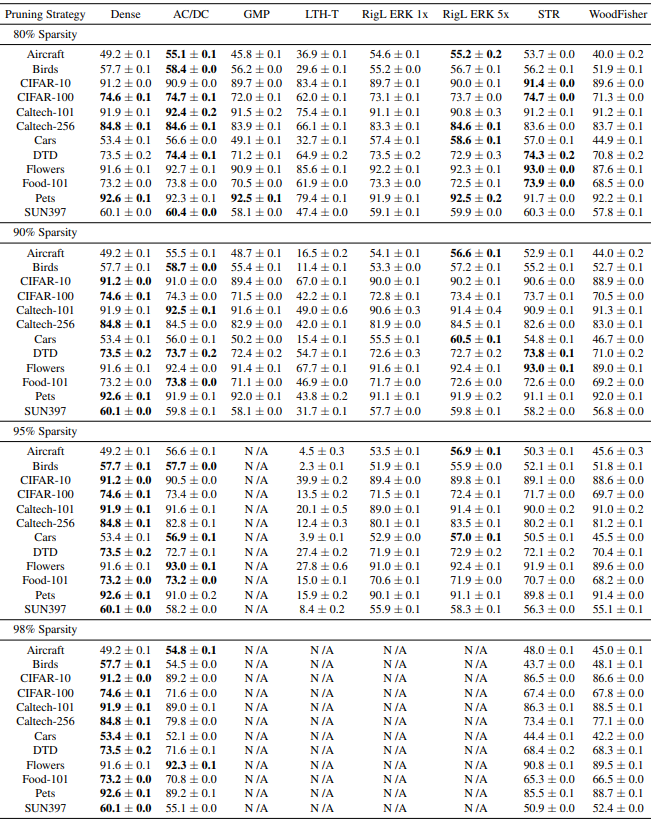 Note that the LTH-T method is designed for full fine-tuning and is therefore excluded from this analysis. The figure also shows the results for the sparsity of 80% (see the Linear Finetuning section).

In general, it can be seen that the choice of pruning method in the upstream task makes a significant difference in the downstream task performance.

This difference is more pronounced for specialized downstream tasks with fine classes, for example, in Aircraft we see a 15% difference in Top-1 accuracy between the best performing AC/DC and RigL ERK 5x and the worst performing WoodFisher.

Based on these results, the behavior of each method when the difference in Top1-accuracy between the dense backbone and the pruned model is used as a measure of the difficulty of each downstream task is as follows. 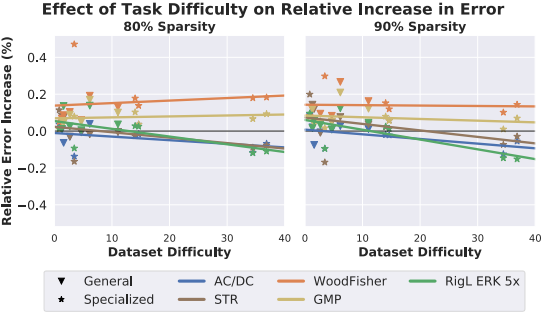 The figure shows that the regularization methods (AC/DC, STR, and RigL) tend to perform better than the baseline with a dense backbone as the task difficulty increases. This is more pronounced at 90% sparsity.

On the other hand, gradual sparsification methods (GMP, WoodFisher) do not exhibit this behavior. This suggests that regularization-based Pruning methods appear to be more suitable for linear fine-tuning when the downstream task is specialized or difficult.

It is also notable that sparsity does not correlate well with the performance of downstream tasks. For example, AC/DC and RigL have a 1~2% difference in ImageNet accuracy between models with 80% and 90% sparsity, while the relative error to a dense baseline remains flat. However, extreme sparsity (98%) tends to degrade performance.

In general, the following results were found

Next, the results for fine-tuning the entire model are shown below. 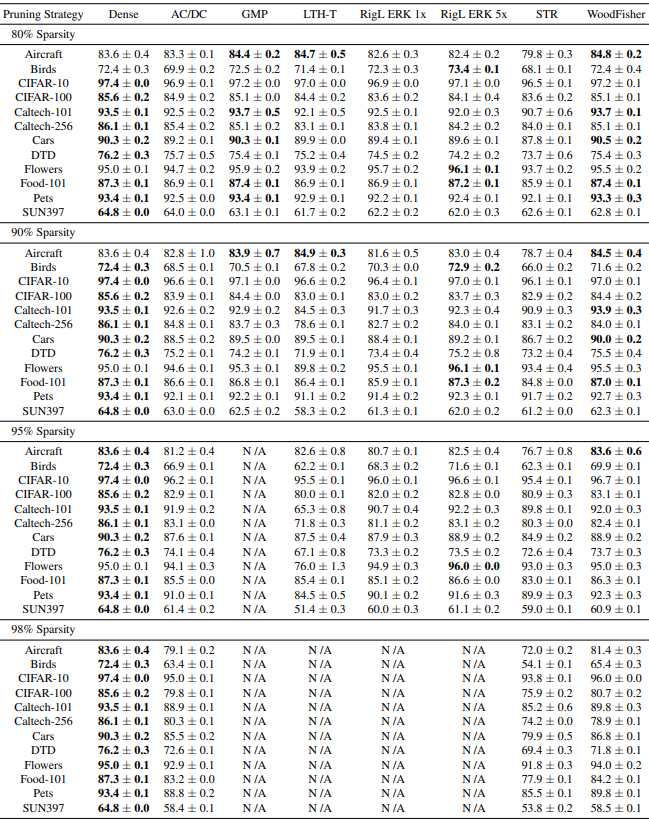 As in the case of linear fine-tuning, considerable performance differences were observed between the Pruning methods.

First, there is a consistent trend that quality decreases as the degree of sparsity are increased. In addition, the gradual sparsification method (WoodFisher, GMP) tends to show better transition learning performance than the other methods. In particular, at 80% and 90% sparsity, the downstream task performance was almost as good as that of the dense models, which is the opposite of the linear fine-tuning case.

Furthermore, looking at the downstream task performance, WoodFisher and GMP consistently showed the top performance, while the performance of the other methods tended to vary significantly from task to task.

In general, incremental sparsification methods are seen to be a good choice for full fine tuning on downstream tasks. These techniques show comparable performance to dense backbones at 80% or 90% sparsity.

It is an interesting result that the optimal pruning method differs depending on whether linear or full fine-tuning is chosen. To investigate this result, we measured the fraction of ResNet50 backbones that are fully pruned convolutional filters. ( See Appendix E of the original paper.)

The results show that AC/DC has on average 2~4 more channels to be eliminated than the other methods. This result seems to lead to fewer features being trainable during full-fine tuning.

On the other hand, the sparsity of GMP and WoodFisher is unstructured, which may increase the number of features that can be expressed during full fine-tuning.

In the case of linear fine-tuning, the relationship with the gradual sparsification method is seen to be reversed, as the regularization method produces more robust features. 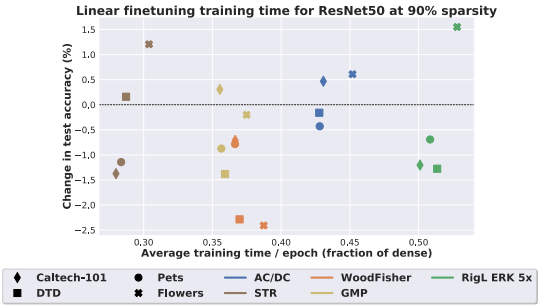 In general, we found that we could speed up the learning time by a factor of 2~3 without adversely affecting the accuracy.

In the appendix of the paper, experiments are conducted on ResNet18, ResNet34, and MobileNet, as well as on YOLOv3 and YOLOv5 to measure object detection task performance, with results that support previous analyses.

The results of full-fine tuning with structured sparse models also showed a tendency to decrease the transition learning performance compared to unstructured methods.

Extensive analysis of the transition learning performance when sparsifying ImageNet pre-trained models using pruning methods shows that different performances can be obtained depending on the downstream task and learning settings, even though the ImageNet classification accuracy is comparable. 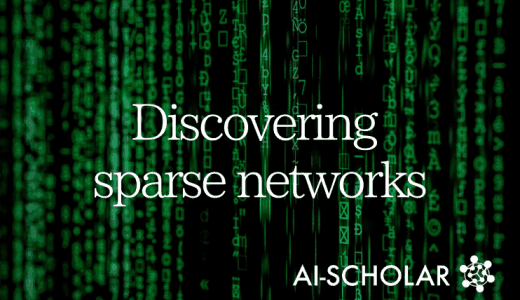 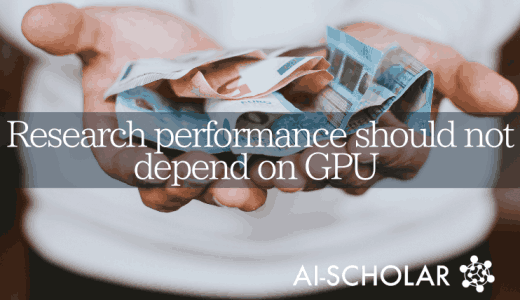 BERT For The Poor: A Technique To Reduce The Weight Of Complex Models Using Simple Techniques To Maximize Performance With Limited ...

BERT For The Poor: A Technique To Reduce The Weight Of Complex Models Using Simple Techniques To Max ...