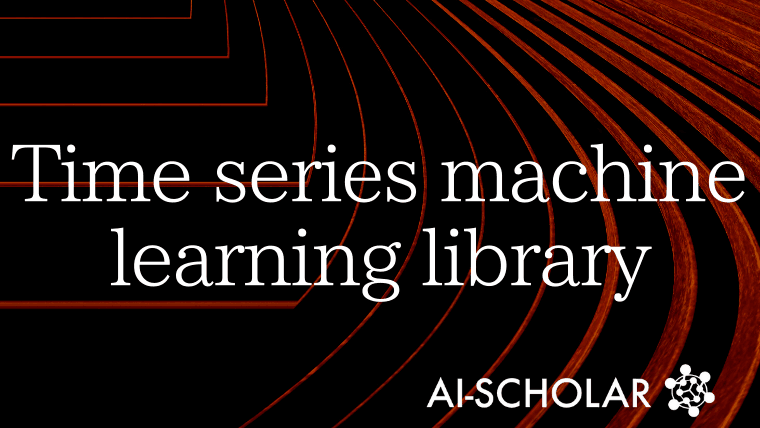 Two time-series machine learning libraries have been announced in quick succession, so I'll introduce them all together.

The first is Merlion, a Salesforce group.

Time series are ubiquitous in monitoring the behavior of complex systems in real-world applications such as IT operations management, manufacturing, and cyber security. They can represent key metrics of computing resources, business indicators, or feedback from marketing campaigns on social networking sites. In all of these applications, it is important to accurately predict the trends and values of key metrics and to quickly and accurately detect anomalies in those metrics. In fact, in the software industry, anomaly detection that notifies operators promptly is one of the key machine learning techniques for automating the identification of problems and incidents to improve the availability of IT systems.

Although several tools have been proposed to account for the different potential applications of time series analysis, there are still several issues with today's industry workflows for time series analysis. These include inconsistent interfaces between data sets and models, inconsistent metrics between academic papers and industrial applications, and a relative lack of support for practical features such as post-processing, AutoML, and model combination. These issues make it difficult to benchmark across multiple datasets and settings, across a variety of models, and to make data-driven decisions about the best model for the target task.

Table 1 shows the feature table of Merlion compared to other libraries.

Typical usage of the library is as follows

Since no single model will work well for all-time series and all use cases, it is important to provide users with the flexibility to choose from a wide range of heterogeneous models Merlion implements a variety of models for both forecasting and anomaly detection. To make all these choices transparent to the user, we integrate all Merlion models into two generic APIs, one for prediction and one for anomaly detection. All models are initialized with a config object that contains implementation-specific hyperparameters and supports the model. train(time_series) method. Given a generic multivariate time series, the predictor will be trained to predict the value of a single target univariate value for a single target univariate. You can then get the model's forecast for a set of future timestamps by calling the model. forecast(time_stamps).

For models that require additional computation, the Layer interface, which is the basis for the autoML functionality provided. Layers can be used to implement additional logic on top of existing model definitions that are not properly fit into the model code itself, such as seasonality detection or hyperparameter tuning. Layers have three methods: generate_theta to generate candidate hyperparameters θ, evaluate_theta to evaluate the quality of θ, and set_theta to apply the selected θ to the underlying model. theta to apply the selected theta to the underlying model. Another class, ForecasterAutoMLBase, implements the forecast and train methods that leverage the methods of the Layers class to complete the predictive model. Finally, all models support the ability to adjust their forecasts with historical data time_series_prev, which is different from the data used for training. These conditional forecasts can be obtained by calling model.forecast (time_stamps, time_series_prev) or model.get_anomaly_score (time_series, time_series_prev).

When a time series model is deployed live in production, training, and inference are typically not performed in batches on the complete time series. Rather, the model is retrained at normal intervals, and inference is performed in streaming mode when possible. To simulate this setting more realistically, we provide an EvaluatorBase class that implements the following evaluation loop.

It also provides a wide range of evaluation metrics for both forecasting and anomaly detection, implemented as the enumerations ForecastMetric and TSADMetric, respectively. Finally, we provide the scripts benchmark_forecast.py and benchmark_anomaly.py. This allows the user to use this logic to easily evaluate the model performance of the datasets contained in the ts_datasets module.

We further reduce the training time of the autoML module in the following way We obtain an initial list of candidate models that achieve good performance with relatively few optimization iterations. We then retrain each of these candidates until the models converge and select the best model by AIC.

Merlion's ensemble of predictors allows the user to transparently combine models in two ways. First, it supports traditional ensembles that report the mean or median value predicted by all models at each timestamp. Second, we support automatic model selection. When performing model selection, we split the training data into training and validation data, train each model on the training data, and retrieve the predictions for the validation data. It then evaluates the quality of these predictions using user-specified metrics and, after retraining on the full training data, returns the model that achieved the best performance.

There are many ways to evaluate the accuracy of a prediction model. Merlion's ForecastMetric provides MAE, RMSE, sMAPE, MARRE, and other metrics.

Merlion supports two key post-processing steps in a heterogeneity detector: calibration and thresholding. Calibration is important to improve the interpretability of the model, while thresholding converts a series of continuous dysmorphic scores into individual labels, reducing the false positive rate.

To use a model successfully, you need to be able to interpret the anomaly scores returned by the model. This would make many models immediately unusable by users unfamiliar with the particular implementation. Calibration fills this gap by allowing all anomaly scores to be interpreted as z-scores, i.e. values extracted from a standard normal distribution. This simple post-processing step dramatically improves the interpretability of the heteroskedasticity scores returned by individual models.

The most common way to determine whether an individual timestamp t is an anomaly is to compare the anomaly score st with a threshold τ. However, in many real-world systems, a human is alerted each time an anomaly is detected. A high false-positive rate increases the load on the user to investigate each alert and may result in a system that the user does not trust. A way to avoid this problem is to include additional automated checks that must be passed before alerting a human. These steps can significantly improve accuracy without adversely affecting repeatability, and Merlion implements all of these features in the user-configurable AggregateAlarms post-processing rules.

Because both the time series and its heterogeneity are so diverse, no single model can be expected to be optimal for all use cases. As a general rule, a heterogeneous ensemble of models is likely to generalize better than individual models within that ensemble. Since the anomaly scores of all Merlion models can be interpreted as z-scores, an ensemble of anomaly detectors can be constructed by simply reporting the average calibrated anomaly scores returned by the individual models and applying thresholds. Empirically, we find that the ensemble reliably achieves the strongest or most competitive performance across multiple open source and internal datasets for both univariate (Table 10) and multivariate (Table 13) anomaly detection.

A key challenge in designing appropriate evaluation metrics for time series anomaly detection lies in the fact that anomalies are almost always time frames rather than discrete points. Thus, while it is easy to compute pointwise (PW) fit rates, recall rates, and F1 scores for predicted anomaly label sequences compared to correct label sequences, these metrics do not reflect the quantities of interest to human operators.

We propose a point adjustment (PA) metric as a solution to this problem. If any point in the positive dissimilarity window is labeled as dissimilar, then all points in the segment are treated as true positives. If the window is not flagged as an anomaly, then all points are labeled as false negatives. Anomalies predicted outside the anomaly window are treated as false positives. The goodness of fit, repeatability, and F1 can be calculated based on these adjusted true/false positive/negative counts. However, the drawback of the PA metric is that it is biased towards reward models for detecting long anomalies rather than short anomalies.

Since Merlion is a library, it is equipped with various methods as described so far, but since a performance comparison is performed here, it is better to refer to it when selecting.

We primarily evaluate our models on the M4 benchmark, a reputable time series forecasting competition. The dataset contains 100,000-time series from a variety of domains, including financial, industry, and demographic forecasting, with sampling frequencies ranging from hourly to yearly. The sampling frequency ranges from hourly to yearly; Table 2 summarizes the dataset. In addition, we evaluate three internal datasets of cloud KPIs, which are described in Table 3. To reduce the impact of outliers, we show both the mean and median MAPE for each method.

Tables 4 and 5 show the performance of each model on the public and internal datasets, respectively; Table 6 shows the average improvement achieved using the autoML module.

We collect a public dataset and an internal dataset (Table 7) and train the model by training partitioning of the data. For some datasets, we resample the data at a specified granularity. For each time series, we train the model in training partitions and predict the first univariate as the target sequence. We do not retrain the model but use the evaluation pipeline to incrementally obtain forecasts for test splits using a rolling window. Predict the time series values for the next three timestamps while conditioning the prediction on the previous 21 timestamps. We obtain these 3-step predictions for all timestamps of the test split and evaluate the quality of the predictions using sMAPE if possible, otherwise using RMSE.

Table 8 shows the performance of each model. GBForecaster achieves the best results on three of the four data sets. The VAR model shows competitive performance on only one data set. For this reason, we consider GBForecaster to be a good "default" model for new users and early exploration.