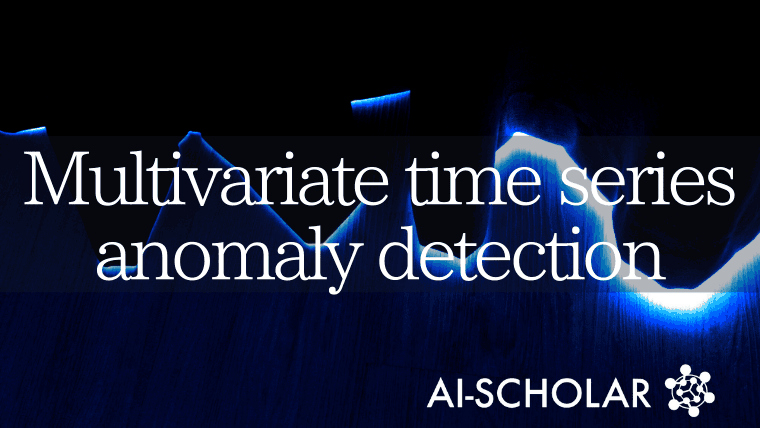 3 main points
✔️ We are building a new framework taking into account the characteristics of multivariate time series data and the purpose of using the results.
✔️ Presenting a solution for cases where relationships are found between variables, rather than lumping univariate data together, will pave the way for a leap forward not only in space and cloud computing but also in many
✔️ The performance of SOTA is even better than SOTA that has been coming out in the last few years.

The framework developed is named MTAD-GAT, as the title of the paper suggests. For time series forecasting using deep learning, we introduced a survey paper in a previous AI SCHOLAR article, " Deep Learning Changes Future Forecasting ". I listed elements such as LSTMs as building blocks and mentioned that deep learning may provide outputs that cannot be obtained with classical methods. However, he did not discuss multivariate data in depth there.

LSTM-based encoders and decoders modeling the restoration probability under normal conditions [3], and stochastic recurrent networks of multivariate time series using stochastic latent variables [4] have been proposed. However, there is no paper that explicitly captures the correlation between multivariates, and this paper cuts into that.

Before inputting the data into these layers, the time series data is 1D-convolution processed to extract high-level feature values.

The concatenated hidden layer variables then input to the GRU (Gated Recurrent Unit). It captures the sequence patterns of the time series. The output of the GRU is input to the prediction-based model and the recovery model in parallel. Fully connected network is used for the prediction-based model and VAE (Variational Auto Encoder) is used for the restoration model.

As preprocessing, we use max-min regularization and SR (Spectral Residual), which is SOTA in univariate anomaly detection.

The graph attention is expressed for each node by the following equation.

σ is the sigmoid activation function; L is the number of nodes in the neighborhood of i. The attention score α is obtained as follows.

In the feature value-oriented graph attention layer, a node corresponds to each multivariate variable, and the input is given as a sequential vector of time series data with all timestamps n. The graph is created with k number of variables.

In the time-oriented graph attention layer, time-series data are separated by Sliding windows, there is n number of nodes with n number of timestamps, and vectors with the multivariate number of dimensions are output from each graph.

The first term in the loss function of the restoration model is the negative log-likelihood and the second term is the Kullback-Leibler divergence.

For each timestamp, there are two inference results. The first is the predicted value, and the second is the restoration probability. For anomaly detection, we balance the two results and use the optimized result. The threshold of the anomaly determination is automatically determined by the POT (Peak Over Threshold) algorithm. The score of the inference is calculated using the hyperparameter γ as follows.

The evaluation metrics are precision, recall, and F1 score.

The following eight SOTAs were used for comparison. All of them are multivariate anomaly detection published in 2018-2019. They include prediction-based and restoration-based models.

We propose a probabilistic model for multivariate time-series anomaly detection, in which temporal dependencies are grasped by GRU and then projected onto a probability distribution by VAE. We consider patterns with low recovery probability to be anomalies in comparison with normal patterns.

We propose an unsupervised, non-parameterized threshold determination algorithm for the output of the LSTM.

We do not look at time dependence but focus only on multivariate anomaly detection.