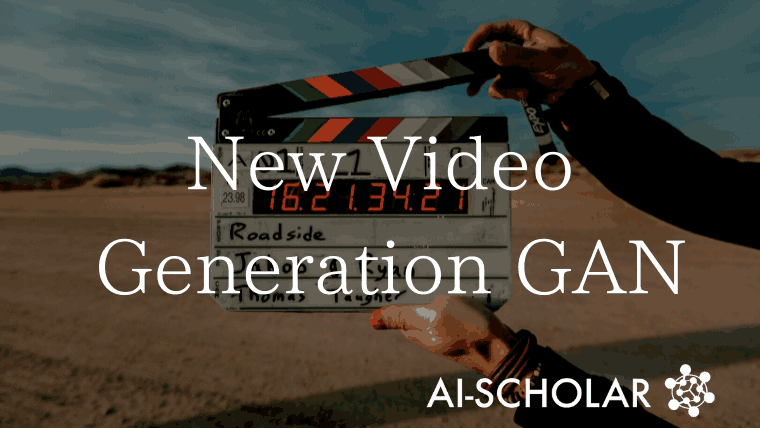 The ability to easily process high-dimensional input, especially in the field of computer graphics such as NeRF, is a decisive difference from conventional methods. (This is because conventional graphics methods require the use of a spherical prescriptive function in addition to a three-dimensional grid.)

The DIGAN (dynamics-aware implicit generative adversarial network ) presented in this paper is a new INRs-based GAN for video generation based on this INR-GAN. It not only achieves a long time and high-quality video generation compared to existing video generation models, but also has various interesting properties such as video interpolation, extrapolation, and various motion sampling.

In this model, the Generator generates a Video INR that transforms the video into coordinates based on the Content (each image in the decomposition of the video) and Motion (the motion of objects in the video) features of the video.

Also, by randomly conditioning a Motion vector on a Content vector, it is possible to generate a variety of videos while sharing the initial frame of the video.

In this paper, comparative verification was performed under the following conditions.

Here is the video dataset (UCF-101, Kinetics-food) generated by DIGAN as a result of the validation. 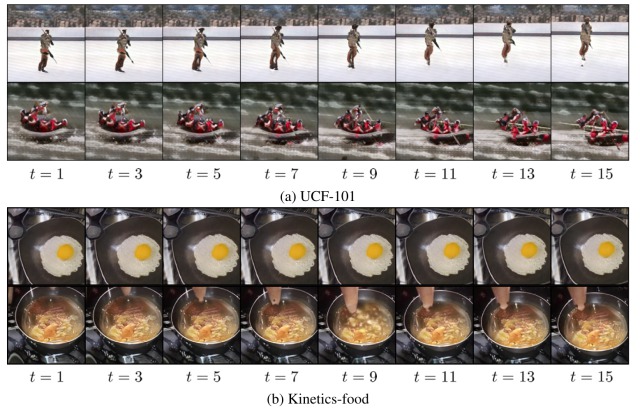 As you can see, we can confirm that we can generate very high-quality videos. In addition, the following table shows the results of the comparative verification of DIGAN and existing video generation models in terms of evaluation metrics. 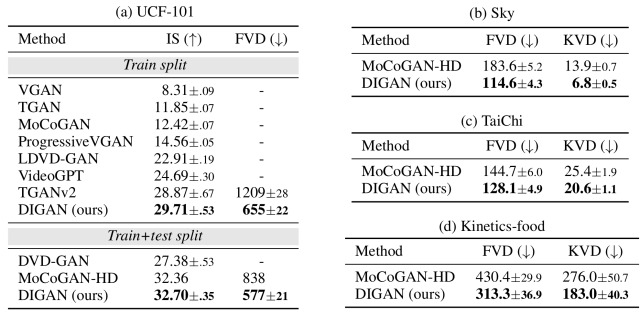 From this table, we can see that DIGAN significantly outperforms existing video generation models on all datasets. These results demonstrate the advantages of using INRs for video generation.

In addition, from these verifications, we obtained interesting properties of DIGAN that are not found in existing video generation models, as shown below.

We'll look at them one at a time.

DIGAN can easily interpolate (fill in intermediate frames) or extrapolate (generate video outside of frames ) videos by controlling the input coordinates of the Generator. Furthermore, because INRs model the video continuously, the video interpolated or extrapolated by DIGAN is generated much more naturally than a discrete generative model.

The upper image is MoCoGAN-HD and the lower image is generated by DIGAN. The yellow frame line is the extrapolated part. You can see that MoCoGAN-HD can't extrapolate the video and the result is blurry, whereas DIGAN can produce a clear video.

Unlike existing video generation models that autoregressively sample the next frame conditional on the previous frame, DIGAN can generate arbitrary time samples by controlling the input coordinates. This allows DIGAN to predict past (or intermediate) frames from future frames, or to compute the entire video at once in parallel.

The figure below shows the prediction results for the past and future frames of DIGAN on the TaiChi dataset.

As explained in the DIGAN overview, DIGAN can perform various motion sampling from the initial frame by controlling motion vectors.

The degree of freedom of sampling variation conditional on the initial frame also depends on the dataset.

With the results left by DIGAN, we believe that efforts to solve the problems of existing methods using INRs will become stronger, and we are very much looking forward to seeing what kind of models will emerge in the future in this research field. The details of the architecture of DIGAN and the generated movies introduced in this article can be found in this paper, so please refer to it if you are interested.