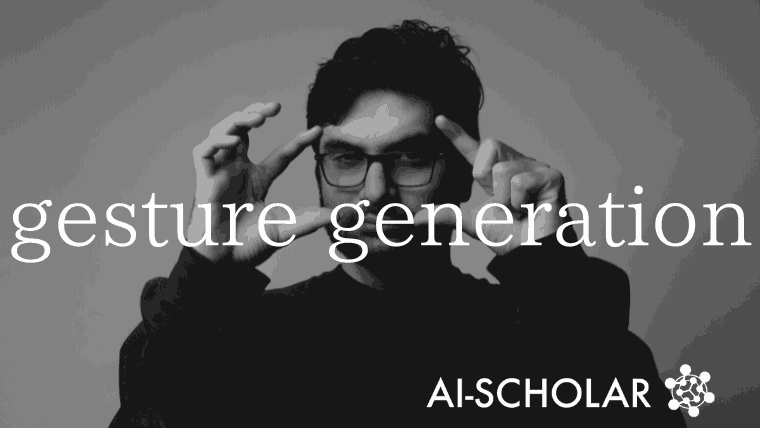 However, one of the problems with existing methods is that they cannot generate gestures that take these emotional expressions into account, even though humans are known to change their gesture styles depending on their emotions (e.g., when they are angry, they wave their arms faster and move their heads). This is a problem that has been

In this paper, we describe the MFCC Encoder and Affective Encoder, and so on, and we introduce a GAN-based model that can generate upper body gestures with such emotional expressions.

As shown in the figure below, this model consists of a Generator, which consists of four Encoders, and a Discriminator, which discriminates between the gesture generated by the Generator and a real gesture. 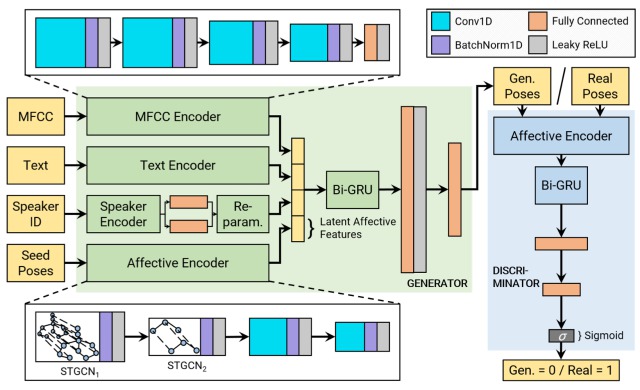 The Generator of this method consists of the following four Encoders.

MFCCs (Mel-Frequency Cepstral Coefficients ) are features based on auditory filters that are commonly used in speech recognition. In this method, MFCC Encoder is designed to incorporate the emotional features obtained from speech such as intonation obtained by MFCCs into gesture generation.

A Text Encoder is used to process text manuscripts that correspond to speech. Our method converts word sequences into features by using trained FastText word embedding models for text manuscripts.

Speaker Encoder uses one-hot vectors for Speaker IDs, which are then trained on two sets of all-join layers.

In this method, we propose an encoding mechanism to convert pose-based emotional expressions into features. Since gestures usually consist of the trunk, arm, and head movements, we consider 10 joints corresponding to these parts. Here, the joints are the vertices and the edges from the trunk to the limbs are the directed graphs, and Encoder is trained for the direction of the edges. To deal with hierarchical encoding, we use STGCNs (Spatial-Temporal Graph Convolutions).

Finally, the feature sequences obtained by the four Encoders are concatenated and trained in a Bi-GRU (Bidirectional Gated Recurrent Unit = Bidirectional GRU), and then passed through the all-combining layer and Leaky ReLU to generate gestures.

The Discriminator in our method takes the gestures generated by the Generator and computes the feature sequence using the Affective Encoder.

Afterward. After using Bi-GRU on this feature sequence, summing the bi-directional outputs by all the coupling layers, and applying a sigmoid function, the Discriminator identifies whether the gesture is real (= gesture generated from the dataset) or fake (= gesture generated by the Generator ) The Discriminator then applies the gesture to the dataset.

By repeating this sequence of learning in an adversarial manner, gesture generation incorporating emotional expressions is possible.

In this paper, we conducted two experiments: a comparison with existing methods and a user study on generated gestures. experiments were conducted.

In this paper, comparative verification was performed under the following conditions.

Below you can see the gesture generation results for two different samples taken from the TED Gesture Dataset.

An investigation by user study into generative gestures

In this paper, a user study was conducted under the following conditions.

The figure below shows the results of the user study for two questions: (a) how plausible the gesture seems, and(b) how well the gesture matches the emotional expression. 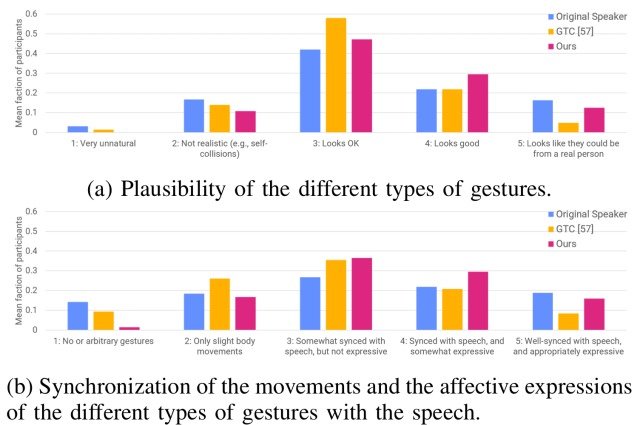 What do you think? Generating more human-like gestures is useful in various multimedia applications such as counseling and robotic assistants, and this field is expected to develop further in the future.

On the other hand, however, there are some points to be improved, such as the inability to handle expressions such as sarcasm that do not match the content of speech and emotion, and the fact that it is limited to generating upper body gestures. The architecture of the model introduced in this article and the details of the generated gestures can be found in this paper, so please refer to it if you are interested.