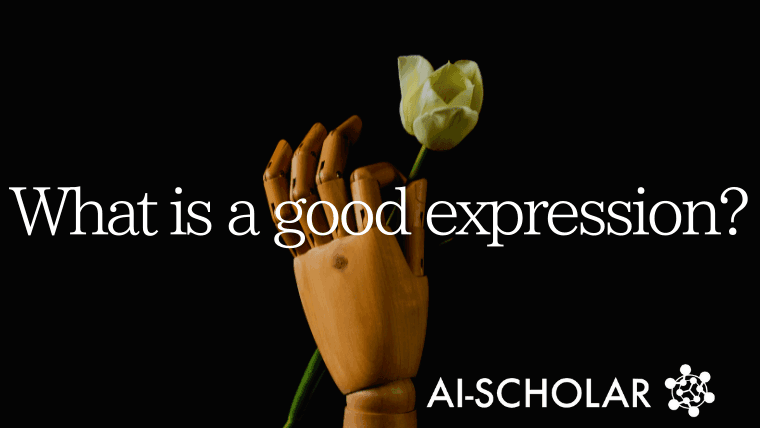 In this article, we introduce the paper RRL: Resnet as Representation for Reinforcement Learning, which was accepted to ICML2021. The application of Reinforcement Learning (RL) to robots has attracted much attention in recent years, but learning RL agents using images as input has become very difficult due to the inefficiency of samples. However, when we consider the application to the real world, it is very difficult to obtain information such as the coordinates of an object from the angle of the robot's joint or image information from the camera attached to the robot as information that the robot can receive as input. Then, how can we solve the task efficiently from these inputs such as images and the robot's own joint angle?

Various methods have been proposed for this problem, such as acquiring encoders by pre-training using supervised or unsupervised learning and using them for reinforcement learning. However, there is a problem that it is necessary to collect data for a specific task in order to acquire a representation. In contrast. This paper shows that a very simple method of using image data from ImageNet with an encoder pre-trained in ResNet can effectively increase sample efficiency.

In the first place, what does a good expression look like? There are four main ways to think about this.
1. a low-dimensional and compact representation
2. features that contain a variety of information for high versatility
3. less susceptible to noise, light, viewpoints, and other task-irrelevant information
4. an effective representation that covers the entire distribution required by the RL policy

Therefore, this paper proposed a very simple method as shown in the figure below. In this method, instead of training encoders with data from a specific domain, we use ImageNet, which is real-world image data with a sufficiently wide distribution, to pre-train encoders, fix the encoder weights, and then use reinforcement learning to learn measures. In the following, we will explain this method in more detail. 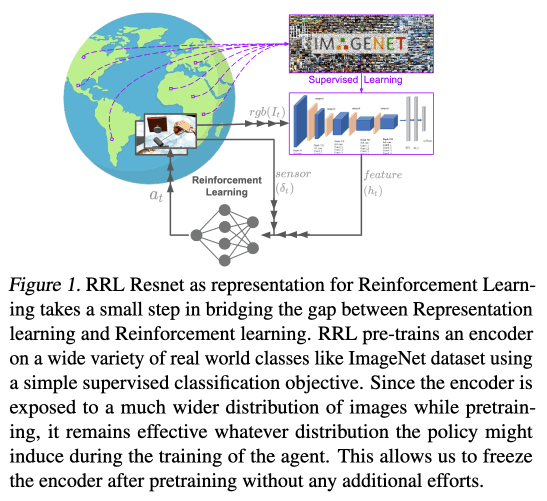 RRL: Resnet as Representation for RL

In reinforcement learning, the most ideal scenario is that the agent receives a low-dimensional state (e.g., coordinates of an object), executes an action, and then receives the next state and reward. This works well, especially in a simulation environment, because it is easy to get a low-dimensional state. However, in the real world, we cannot get the coordinates of objects, etc. Instead, we have to learn from the image information from the camera and the angle of the robot's own joint. Therefore, under such circumstances, it is important to learn and use low-dimensional features effectively from images, which are high-dimensional information. Therefore, in order to satisfy the items of good feature representation mentioned above, this paper shows experimentally that ResNet can be pre-trained with ImageNet and can cope with data of wide distribution by using its encoder. The method is as shown in the figure above. The pre-trained encoder receives the input image and outputs feature values. Here, the weights of the pre-learned encoders are fixed.

In this paper, we conduct experiments using a reinforcement learning algorithm called DAPG, which can learn effectively when the input is a low-dimensional state, but does not learn well when the input is high-dimensional data such as images. Therefore, in this study, we experimentally showed whether the DAPG algorithm can effectively learn AGENT using low-dimensional feature representations obtained from images. In this experiment, we confirm the following five things

In our experiments, we tested the Adroit manipulation suite on the manipulation task shown in the figure below. Since these tasks are difficult to learn from states and the images are complex, effective feature representation is required for successful learning. 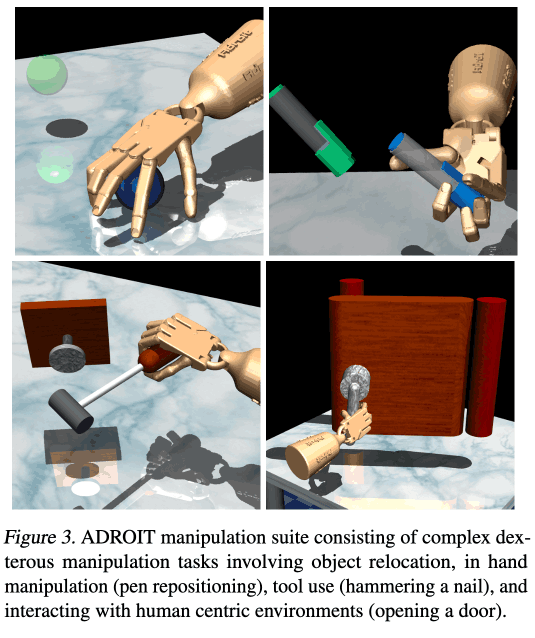 The figure below shows a comparison between RRL and other baselines such as FERM, DAPG, and NPG (Natural Policy gradient). As shown in the figure below, NPG often fails to solve the task even with only the state, indicating that the task itself is relatively difficult. This can be regarded as an oracle baseline. Although RRL is trained from images, it solves all tasks well, and some tasks are almost the same as DAPG with state as input. Finally, the agent trained using FERM, a sample-efficient framework that uses the latest images as input, succeeds in solving some of the tasks, but the large variance in the results indicates that the learning is very unstable. FERM differs from RRL in that it learns encoders using the task's data rather than ImageNet, so it learns task-specific features.

The question is whether the choice of model, ResNet, is only capable of learning effective features by chance in the first place. To address this question, we compared the performance of RRL using ResNet with that of RRL using ShuffleNet, hierarchical VAE (VDVAE), and MobileNet. performance for VAE, but we were able to show that it works well for models other than ResNet. 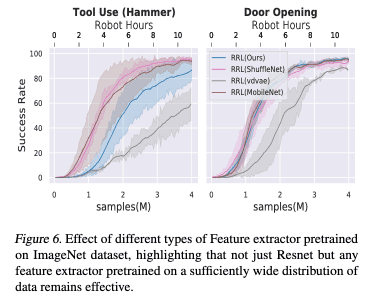 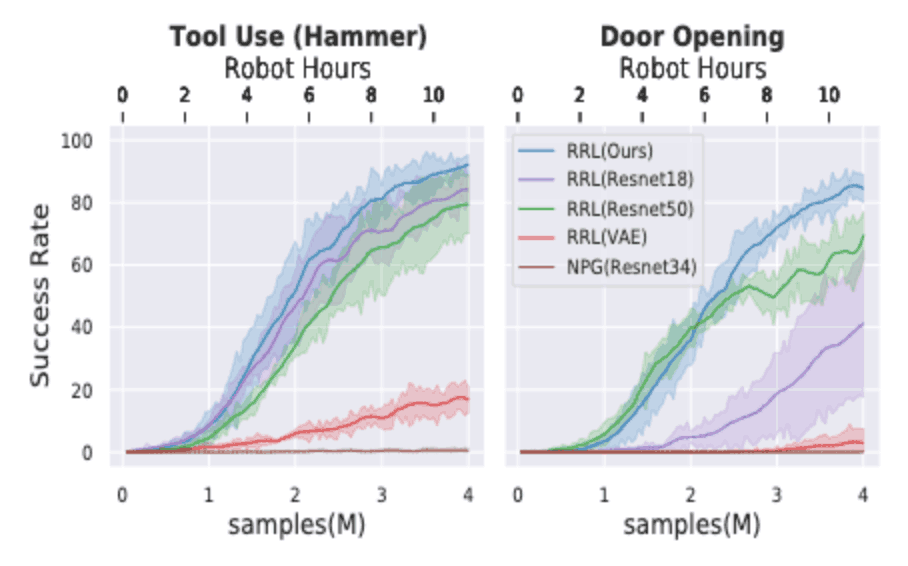 Impact of different inputs on performance

We investigated how the performance of the RRL changes depending on the type of input and noise. The figure below shows a comparison of RRL (Vision) without the robot's joint information obtained from sensors, RRL (Noise) with noise added to the joint information, and RRL (Vision+Sensors) using both image and joint data. As you can see in the figure below, there is some performance degradation, but we were able to show that RRL is robust to noise and performs reasonably well even with only image data. 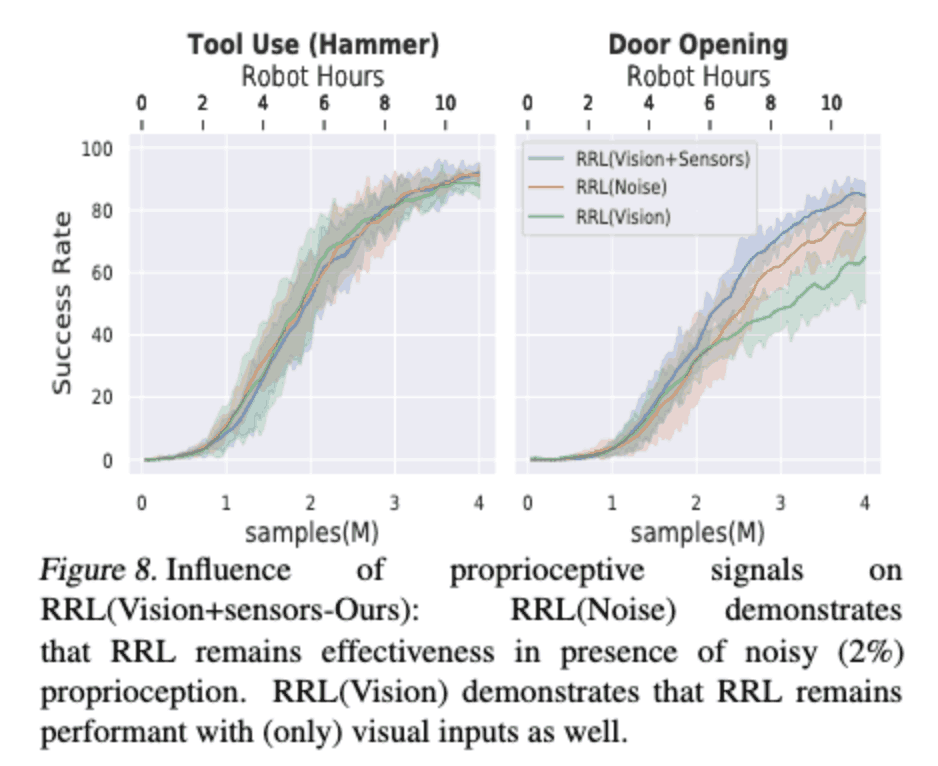 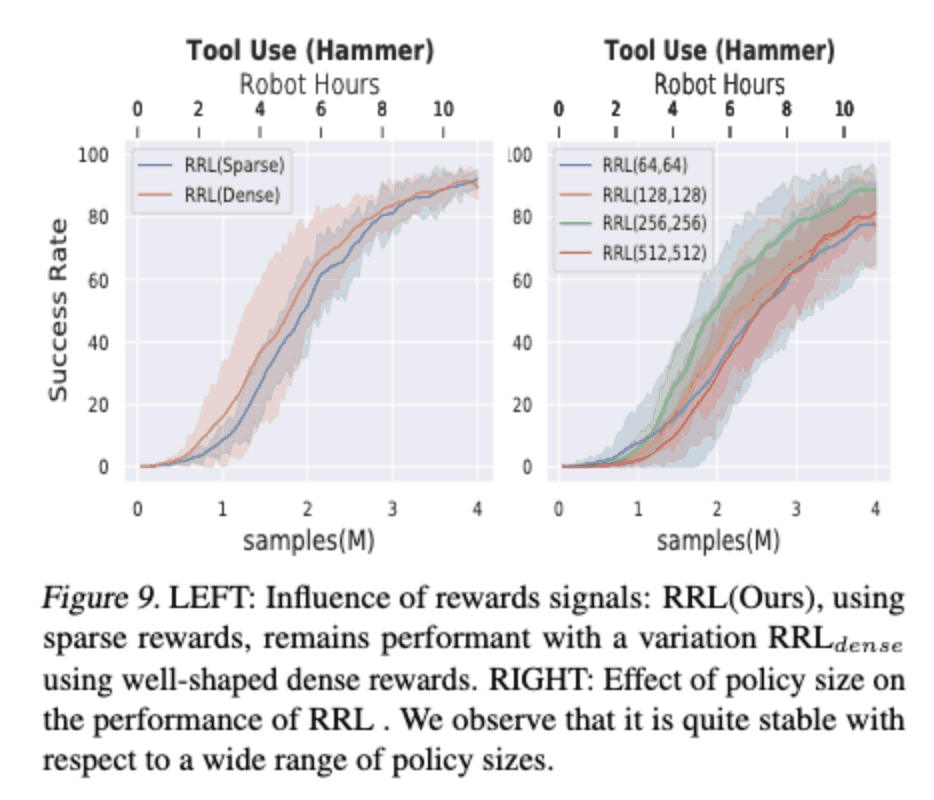 Usefulness of the Visual RL benchmarks currently in primary use

The DMControl environment is often used as a benchmark for RL using images as input (RAD, SAC+AE, CURL, DrQ, etc.). However, it has been shown that such methods work well on DMControld, but do not perform well on Adroit Manipulation benchmark. For example, FERM, which we introduced as a baseline, is trained by using Expert demonstration and RAD, but it is unstable or does not show good performance.

In addition, if we look at the Fixed RAD Encoder, which is an encoder trained on RAD using Cartpole data and RL agent on a task that provides similar image information, we see a significant performance drop compared to RAD, indicating that this Encoder is It is clear that the encoder is learning task-specific features, which shows the low versatility of the encoder. And such task-specific feature representations are easy to learn when the input is a simple image, but the more complex the image is, the more difficult it becomes.

Taken together, we believe that it is desirable to use tasks that are closer to the real world as benchmarks for Visual RL with images as input in the future.

In reinforcement learning, poor sample efficiency when using images as input is an important issue, and I introduced a paper that showed that sample efficiency can be improved by a very simple method: using ResNet features pre-trained on ImageNet. However, it is not effective if there is a large gap between ImageNet and the domain, and I am curious how well it will work, especially in experiments with robots in the real world. We also think that a large dataset covering a wide distribution, such as ImageNet for Robotics, would make for interesting research. 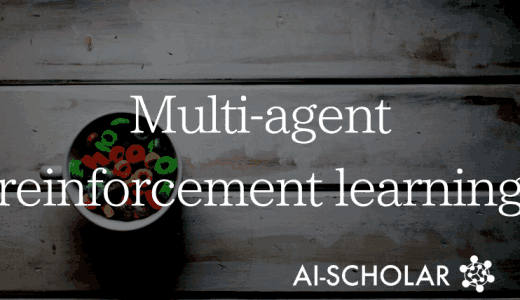 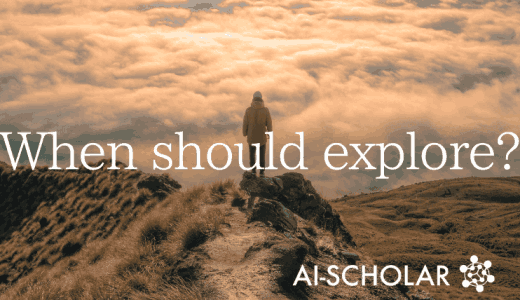