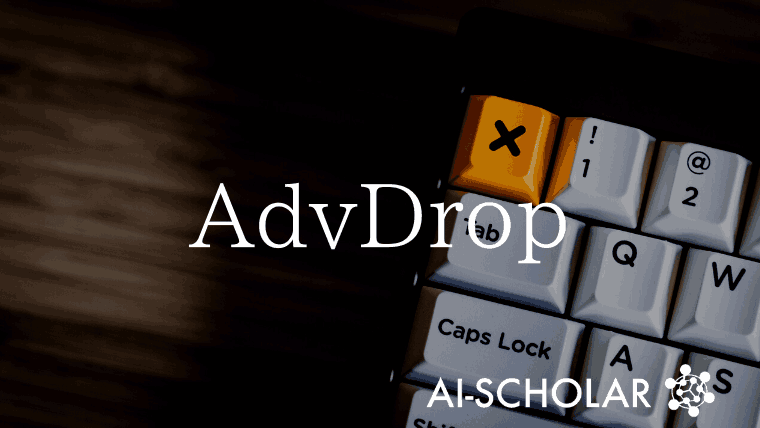 An attack that misidentifies a DNN model is called a hostile attack, and conventionally, the attack is carried out by adding noise to the original data that causes misidentification. In this paper, we propose an approach to attack by removing information from the original data instead of adding noise. This is based on the idea that DNNs, unlike humans, are not yet fully capable of recognizing abstract objects, and that humans can consider data abstracted enough to be identifiable to be some sort of hostile sample. The authors test the extent to which the adversarial samples generated by removing information affect the DNN.

The contributions in this paper can be summarized as follows.

AdvDrop is a method composed of several parts, as shown in the figure below.

AdvDrop generates the adversary image in the flow shown in the figure above. First, the input image is transformed from the spatial domain to the frequency domain using DCT and then quantization is performed to drop certain frequencies of the transformed image. Then optimization is done by inverse transforming the frequency signal of the image into the spatial domain using IDCT. During optimization, the values of the quantization table are adjusted.

For hostile loss, we use the cross-entropy error.

By minimizing the adversarial loss, the quantization table is optimized to selectively remove information from the input image to malfunction the target model.

Quantization is done by two operations: rounding and truncation. The former maps the original value to the nearest quantization point, while the latter limits the range of values to be quantized. In general, quantization is an operation described by the following equation

As you increase the constraint on the quantization table, you can see that the detailed information gradually disappears, as shown in the figure below. 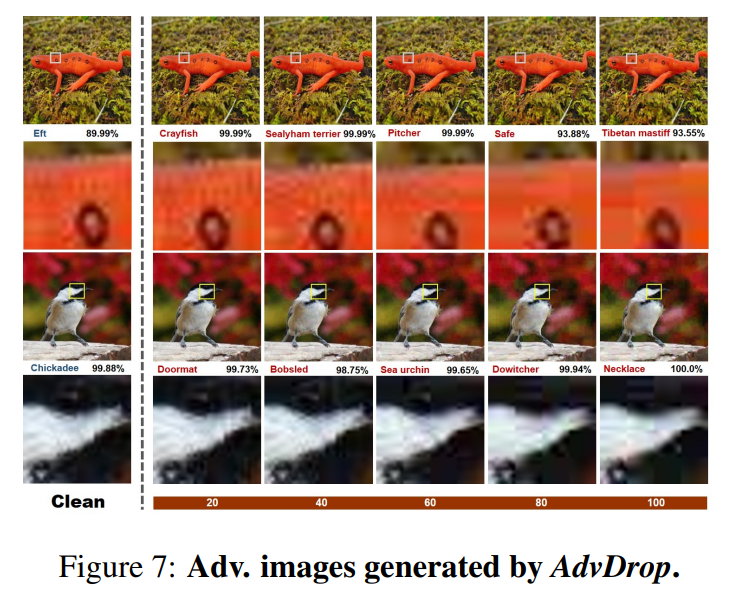 We then compare the adversarial samples generated by AdvDrop against other attack methods. We employed lpips as a perceptual metric to measure how similar two images are in a way that is consistent with human judgment. lpips value represents the perceptual loss, and the lower the value, the better. The figure below shows the perceptual loss calculated by lpips on the y-axis and the percentage change in the size of the resulting image compared to the original image on the x-axis. For example, in the case of AdvDrop-100, the x-axis value shows that an average of 36.32% reduces the size of the hostile image compared to the size of the normal image. On the other hand, for PGD, contrary to AdvDrop, the size of the generated hostile image is larger than the original image. Therefore, in the case of PGD, the x-axis value represents how much the size ratio has increased. As can be seen from the figure, in both settings, the adversary image generated by AdvDrop is more perceptually consistent with the original image compared to PGD, although the relative size ratio changes more than in PGD. 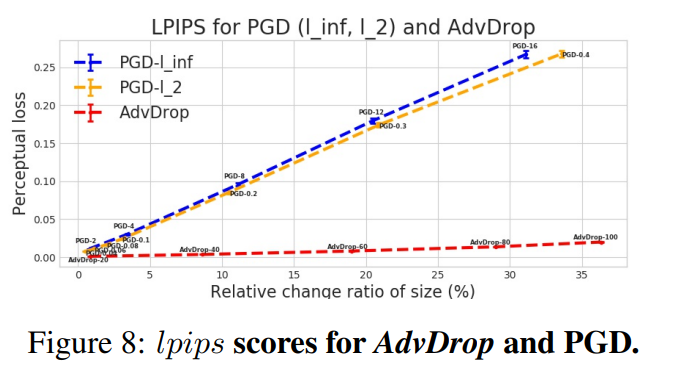 Next, we evaluate the performance of AdvDrop for both targeted and non-targeted types. We prepared three kinds of constraint conditions for the quantization table and evaluated each of them. The results are shown in the table below.

As this table shows, relaxing the constraint ε improves the success rate of AdvDrop for both targeted and non-targeted types. when ε is 100, we can achieve almost a 100% success rate.

In this section, we evaluate the effectiveness of the proposed AdvDrop in various defense techniques by comparing it with other adversarial attacks. Here we first generate adversarial samples by adversarial attacks such as PGD, BIM, C&W, FGSM, and DeepFool. Then we test different defense methods such as adversarial learning and JPEG compression on these samples and evaluate the strength of these attacks under defense. The results are shown in the following table. 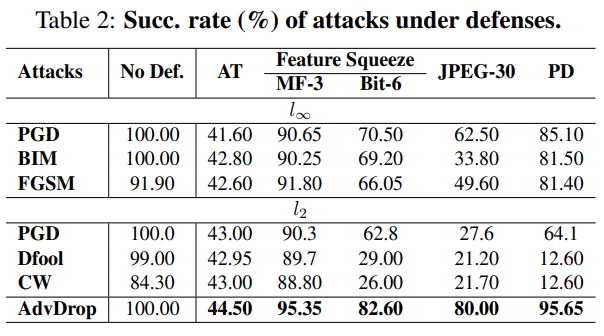 The results show that the proposed method has a higher probability of a successful attack than other attack methods when each defense method is applied.

We tested where and what information is reduced by AdvDrop in a given image. To test this, we visualized the model's attention span and the amount of information that AdvDrop drops in different regions of a given image. The results are shown in the figure below. 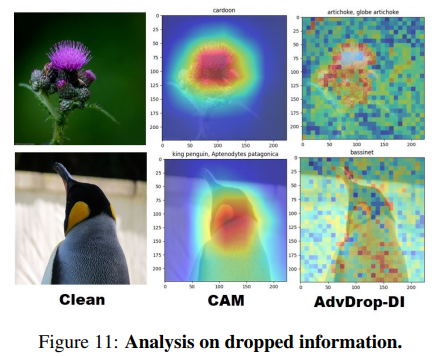 In this paper, the authors investigate adversarial robustness from a new perspective and propose a new approach called AdvDrop, which creates adversarial samples by dropping existing details in the image. The authors plan to use other methods to remove information from images in the future, so we look forward to future developments. 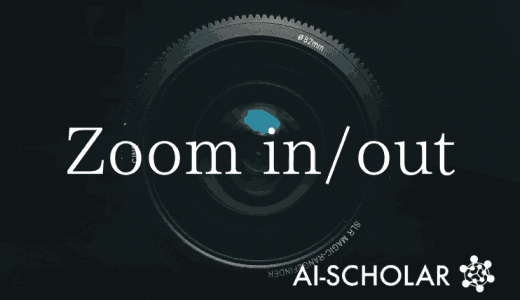 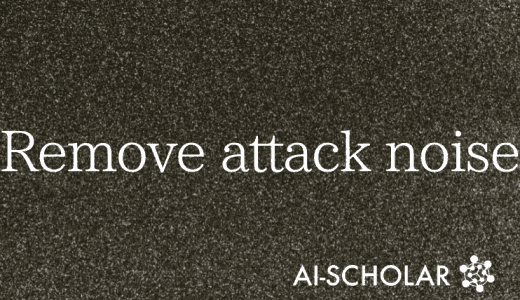 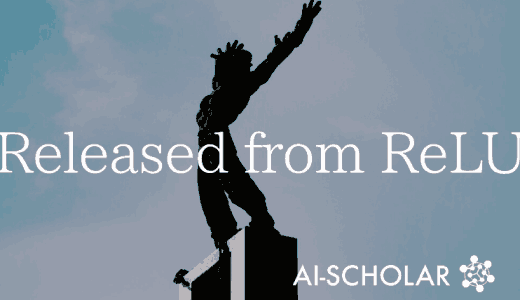 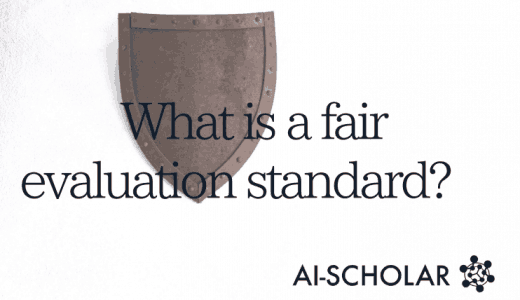 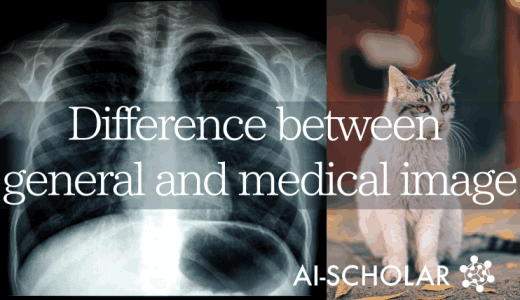 Differences Between General And Medical Image Classification Models From The Perspective Of Adversar ... 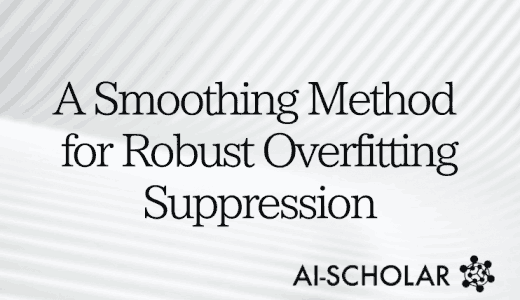